A few months ago SandForce announced its second generation SSD controller: the SF-2000 series. The specs SandForce released at the time were almost too good to be true. As a refresher here’s what we saw back in October of last year:

SandForce is promising a single enterprise level drive that can deliver 500MB/s sequential reads and writes (for highly compressible data), and up to 60K IOPS for 4KB random reads and writes. That’s not an evolutionary improvement, that’s more than a doubling of what most of the competition can do today. Even compared to existing SandForce drives it’s a huge increase in performance. But as I’ve heard many times before, anyone can put out a promising PDF.

Today at CES, OCZ previewed its first SF-2000 based drives: the Vertex 3 Pro and Vertex 3 EX. Both are based on SandForce’s SF-2582 controller, the highest end offering in the SF-2000 family. The drives won’t see the light of day for months (sometime in Q2) and what OCZ is showing today is very, *very* early silicon and hardware. The drives are using 32nm Toshiba toggle-mode NAND (effectively DDR NAND), however OCZ will go to market with 25nm Intel NAND when the drive is ready.

First let’s look at the specs OCZ is promising for these drives: 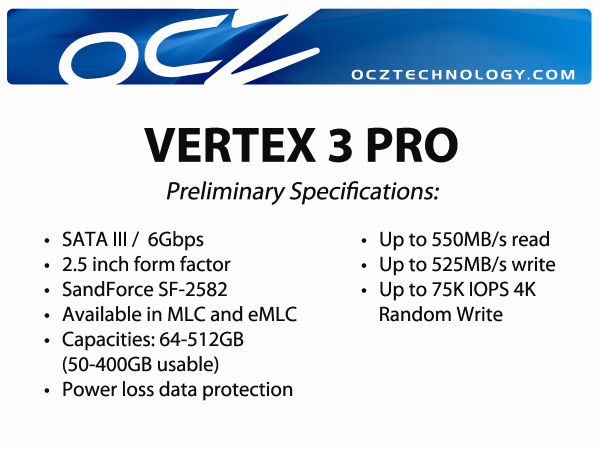 OCZ’s specs are even higher than SandForce’s. This is getting ridiculous. Thankfully, OCZ let me run some of my own Iometer tests on the drives to verify the claims. Surprisingly enough, the Vertex 3 Pro looks like it’s really as fast as OCZ and SandForce are claiming. When running highly compressible data (pseudo random in Iometer) at low queue depths, I get 518MB/s sequential write speed and nearly 500MB/s for sequential read speed. Remember this is the very first version of the drive and there’s months of tweaking ahead to get it ready for production. Performance may even increase by the time OCZ actually ships the drive. Furthermore, this is the performance of a single drive with a single controller - there’s no funny on-board RAID going on, we’re just talking about the performance of a single drive.

Obviously to hit these speeds you need a 6Gbps controller. Thankfully there are at least a few ways to get those ports. 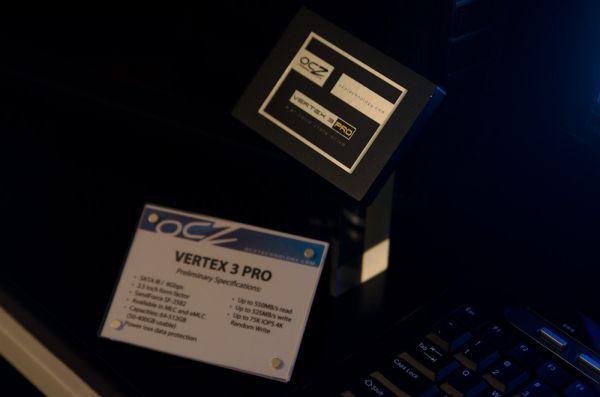 It’s looking like SandForce will be last to bring out their next-generation drive in the first half of the year with both Micron and Intel beating it to the punch, but if we can get this sort of performance, and have it be reliable, it may be worth the wait.