Among the Best Looking Windows Notebooks Ever Built

Schizophrenic styling, begone! Glossy plastic, away with ye! Glossy screen, be no more! While business-class notebooks have traditionally been more staid and in many ways more attractive than their consumer-oriented cousins, HP's last generation had some real issues with conflicting aesthetics. We reviewed the 8740w and found it to be a bit uneven in terms of styling. There were touch-based media controls and a three-toned interior that felt as disconnected as it looked. But HP's designers returned to the drawing board and what they came back with is arguably the most attractive line of Windows notebooks I've ever seen.

First, they're down to a simple two-tone scheme and it's all black matte plastic and silver brushed aluminum. The EliteBook 8460p looks and feels incredibly sturdy, with the ports being laser-cut out of a band of aluminum that surrounds the notebook. The lid is aluminum, and the screen bezel is a black matte plastic that's designed specifically to cushion the screen while keeping it from ever making contact with the keyboard and accidentally scuffing it.

The inside surface has been completely redone. The entire area surrounding the keyboard is a single piece of aluminum, with the strip of touch-sensitive controls jettisoned in favor of just a power button and three dedicated, physical buttons backlit with white LEDs: a wireless toggle, a QuickWeb shortcut, and a mute button. Everything else is handled through Fn+function key shortcuts now. The interior of the notebook honestly looks every bit as fantastic as every other part of it. 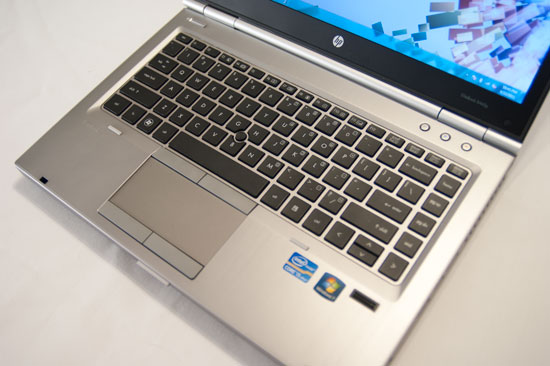 If there's going to be a source of contention with the EliteBook's build, it's liable to be the chiclet-style keyboard. This is essentially the same keyboard as found in all of HP's modern consumer notebooks, and other than the double-high left and right arrow keys it's a good design if you don't mind these types of keys. The layout is intelligent, with a column of document navigation keys to the right of the standard keyboard, exactly where they should be, and at the center of the G, B, and H keys is the familiar trackpoint nub. In practice it doesn't feel as good as the nub on my ThinkPad; the ThinkPad's trackpoint is convex while the EliteBook's is concave, and it makes a difference. That said, it's not quite as horrible as I've heard HP notebook trackpoints can be.

The touchpad is also incredibly easy to use. It's not a clickpad as has become vogue (and is hopefully going out of style on PC notebooks), and HP uses a treated glass surface that's incredibly smooth without getting sticky or slippery due to moisture on your fingertips. This has to be among the most comfortable touchpads I've ever used. The dedicated mouse buttons below it have slightly rubbery surfaces with no audible click, but just the right amount of resistance.

When you move to the bottom of the notebook, you'll see two switches, both of which can be locked into place. The first is the ejection switch for the battery, while the second is for one of my favorite features. It's a quick-release for the entire bottom panel of the notebook, allowing easy access to all of the internals. No screws required, but the bottom panel remains very secure. HP has opted to put all the compliance and licensing labels on the inside of the notebook, beneath this panel, thus keeping the whole unit looking incredibly smooth and classy.

If I have one major complaint, it's the placement of the exhaust vent. Virtually everything else is where it should be, but the notebook exhausts to the right, directly on to the user's dominant hand (assuming the user isn't a southpaw). I actually did have some issues with this while I was testing the notebook; it wasn't ever horrible, but the exhaust vent really should've been either at the rear of the notebook or the rear left side. I don't have anything against the diabolical people who are left-hand dominant (nearly all of my best friends, oddly enough, are left-handed), but the majority of people are righties and they're going to get a little toasty using the 8460p under load with an external mouse.