Cinebench, based on MAXON's software CINEMA 4D, is probably one of the most popular benchmarks around, and it is pretty easy to perform this benchmark on your own home machine. However, it gets a little bit more complicated when you try to run it on an 80 thread server: the benchmark only supports 64 threads.

First we tested single threaded performance, to evaluate the performance of each core. 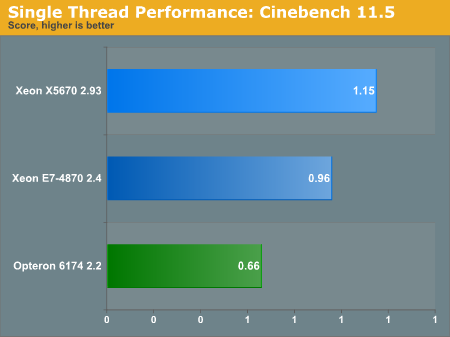 A Core i7-970, which is based on the same "Westmere" architecture gets about 1.2 at 3.2GHz, so there is little surprise that a slightly lower clocked Xeon 5670 is able to reach a 1.15 score. It is interesting to note however that the Westmere core inside the massive Westmere-EX gets a better score than expected. Considering that Cinebench scales almost perfectly with clockspeed, you would expect a score of about 0.9. The E7 can boost clockspeed by 17% from 2.4 to 2.8GHz, while the previously mentioned i7-970 gets only an 8% boost at most (from 3.2 to 3.46GHz). And of course, the massive L3-cache may help too.

The Opteron at 2.2GHz performs like its Phenom II desktop counterparts. A 3.2GHz Phenom II gets a score of about 0.92, so we are not surprised with the 0.66 for our 2.2GHz core.

When we started benchmarking Cinebench on our Xeon E7 platform, we ran into trouble. Cinebench only supports 64 threads at the most and recognized only 32 of our 40 available cores and 80 threads. The results were pretty bad. To get a decent result out of the Xeon E7, we had to disable Hyper-Threading and we forced Cinebench to start up 40 threads. We included a Core i7-970 (Hyper-Threading on) to give you an idea of how a powerful workstation/desktop compares to these servers. This kind of software is run a lot on fast workstations after all. 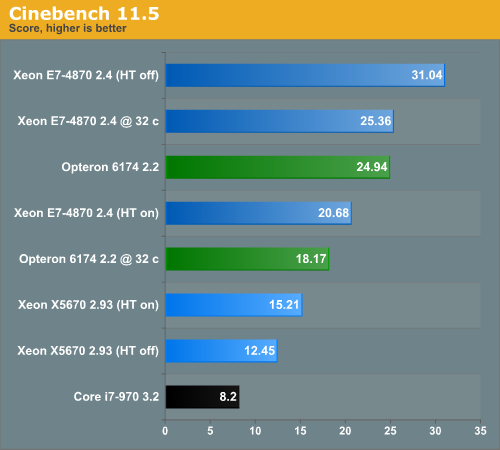 Even cheap servers will outperform a typical single socket workstation by almost a factor of two. The quad socket machines can offer up to three or four times as much performance. For those of you who can't get enough: you can find some dual Opteron numbers here. The dual Opteron 6174 scores about 15, and a dual Opteron 2435 2.6 "Istanbul" gets about 9.

Cinebench scales very easily as can be noticed from looking at the 32 core and 40 core results of the Xeon E7-4870. Increase the core count by 25% and you get a 22.4% performance increase. The Opteron scales slightly worse. Compare the 48-core result with the 32 core one: a 50% increase in core counts gets you "only" a 37% increase in performance.

Below you can see the rendering performance of two top machines rendering with different numbers of cores. 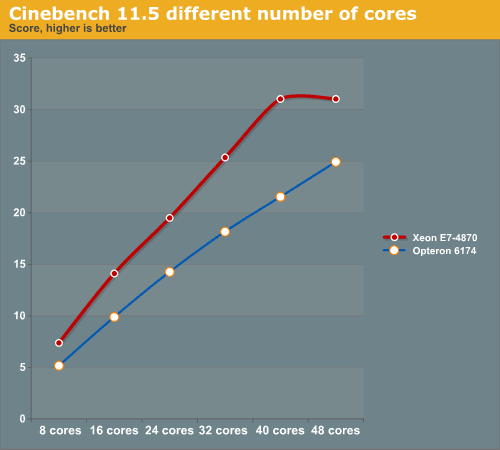 You need about 48 2.2GHz Opteron cores to match 32 Xeon cores. The good news for AMD is that even these 8-core Westmere-EX CPUs are almost twice as expensive. That means that quad AMD Opteron 61xx systems are a viable choice for rendering, at least in CINEMA 4D (assuming it has the same 64-thread limitation as Cinebench). AMD has carved out a niche here, which is one reason why there will be cheaper 4 socket Romley EP systems in the near future.