Mozilla is in the process of pushing Firefox 9 out to users on its release channel, about six weeks after the release of Firefox 8. The major stated improvement to Firefox 9 is what Mozilla calls the Type Inference for JavaScript, which it says improves performance up to 30 percent in some benchmarks. To test this, I ran a few quick SunSpider tests to compare performance to older versions of Firefox and current versions of Chrome and Safari. These tests were run on a 2010 iMac running OS X 10.7.2 with all updates installed and are only meant to measure relative performance between browsers running on the same computer.

Update: We've also run Kraken 1.1 and the v8 Benchmark Suite version 6 on the same browsers - these numbers come a bit closer to realizing the 30 percent improvement over version 8, while even more conclusively demonstrating how far Firefox has come since version 3.6. 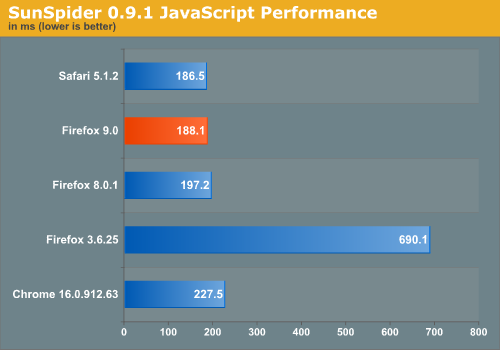 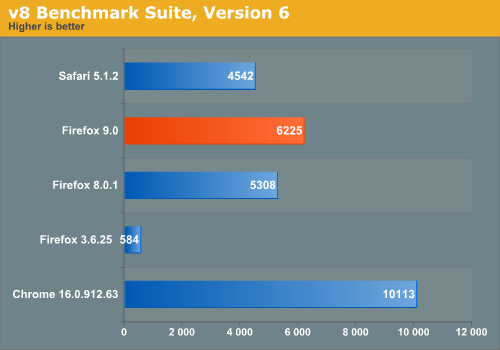 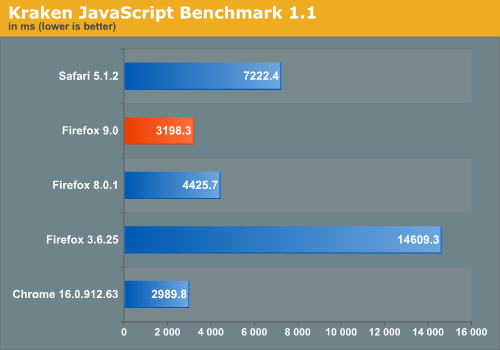 In a standard SunSpider run, Firefox 9 is consistently faster than Firefox 8, but not by anywhere near 30 percent (bearing in mind, of course, that this is just one synthetic benchmark among many). Also note that JavaScript numbers are just one facet of performance - while Safari edges out Firefox 9, to me it seemed a bit slower than both Firefox and Chrome when launching and loading pages. All current browsers completely wipe the floor with Firefox 3.6, both in JavaScript numbers and in apparent speed, so whatever you use you're going to be browsing much faster than you could at the beginning of the year. Increased competition has clearly been good for the browser market.

Firefox 9 also brings two-finger navigation to users running OS X Lion - swiping left on a multitouch device will go back, and swiping right will go forward. Safari and Chrome have already implemented this feature, and while the functionality is the same in Firefox, those browsers include visual cues (arrows in Chrome, a visual sliding of the page in Safari) to let you know that you're doing it, visual feedback that I find helpful. There's still no support for fullscreen mode, though plugins exist to give this functionality to those who want it.

The rest of the improvements can be found in the usual laundry list of small security and bug fixes (including one I had run into where attachments wouldn't download properly when using the Outlook Web App - useful information for shops running an Exchange server). You can get the new browser by using Firefox's built-in updater or by visiting getfirefox.com.

Note: At the moment, Mozilla says that it's not pushing Firefox 9 out to OS X and Linux users automatically because of "a possible issue affecting a small number of users." We'll keep an eye on this and update the post as events progress.