We've been covering the changes in Windows 8 fairly closely since Microsoft started talking about the upcoming operating system, and while most of these changes will probably land in the final version, Microsoft is already making some tweaks based on user feedback. Microsoft's Ilana Smith has written about some of the tweaks made to file copy operations and Windows Explorer since those features were last discussed.

File copy operations get a couple of GUI tweaks and a few useful under-the-hood enhancements. First, when two files in a copy operation have conflicting names, Windows will give you the (opt-in) option to skip files that also have the same timestamp and file size while copying over files that just have the same name as files in the target folder. File copy interrupts, which in past versions of Windows have stopped the copy operation until the user clicks through them, will now queue and display after Windows has copied everything it can.

Under the hood, improvements to the SMB protocol mean that a computer can now dynamically switch to the fastest available network connection in mid-operation, for those cases when you begin a file copy to another computer over wi-fi and then decide it would be faster to plug the computer into the network with a cable. Because it relies on these SMB improvements, this functionality can only kick in for a file transfer between two Windows 8 computers.

Copy operations will also pause when a computer goes to sleep or hibernates, and can be manually resumed when the computer wakes back up. This feature won't kick in unless the user prompts it to, since a sleeping computer can often wake back up on another network where it can't continue the file copy. 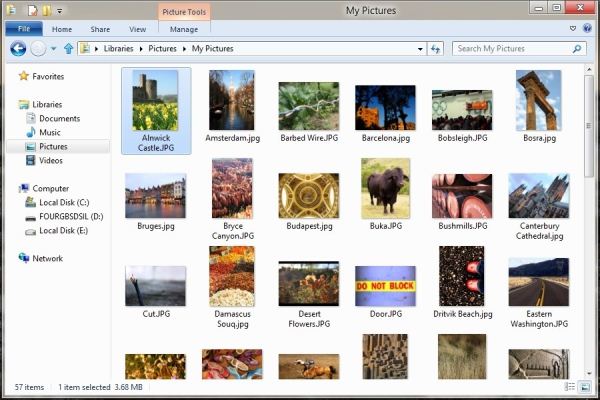 On the Windows Explorer side, the new Ribbon interface is still present, but it is minimized by default - power users who need it can pop it back out, and casual users who don't use it much can retain the screen real estate granted by the minimized ribbon. Customizations you make to the Windows Explorer view settings will also now sync between your Windows 8 systems if you're syncing settings using your Windows Live ID.

Other Explorer changes include: the addition of an "Open PowerShell" option in the File menu to complement the "Open Command Prompt" option, automatic rotation of images based on EXIF data, the removal of a navigation pane scrolling bug, the removal of icon overlays (like a padlock icon for private files) in exchange for a new "Sharing status" column that offers more information while (very slightly) increasing performance, the addition of hotkey information to button tooltips, and the ability to add folders and executables to the new Metro-style Start menu.

All of these changes will all be available in the Windows 8 beta when it releases late next month. We'll continue covering them as Microsoft talks about them.