Prior to today there was a bug in GLBenchmark that prevented it from running on some Android 4.0.3 devices. Our Eee Pad Transformer Prime was one of those devices and thus we couldn't produce updated Tegra 3 scores using GLBenchmark. Thankfully GLBench 2.1.1 finally made it through testing/validation and includes a slightly different workload, with a number of bug fixes. Android 4.0.3 now works properly and we were able to continue our MSM8960 vs. Tegra 3 comparison. Note that the iOS build of GLBenchmark 2.1.1 is not yet available so we can't provide any iPad 2 comparisons yet.

Tegra 3's GPU performance is much improved compared to Tegra 2, and in the Egypt benchmark we see a tangible advantage over MSM8960. As we mentioned yesterday, only the first Krait SoC will use Adreno 225 - future versions will ship with Adreno 3xx, offering even better GPU performance. As the initial showdown is likely going to be Tegra 3 vs. MSM8960, this is a valid comparison. 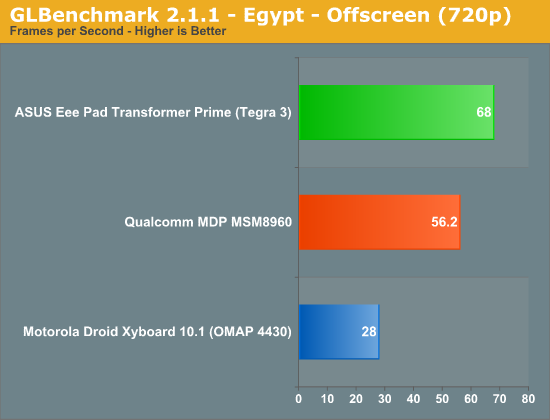 Qualcomm and NVIDIA swap places once again when we look at the older GLBenchmark Pro test, although both perform well thanks to the lighter nature of this test. 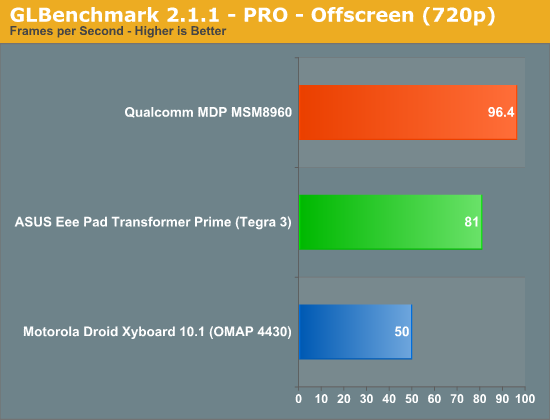 Basemark ES 2.0 is completely dominated by Adreno however: 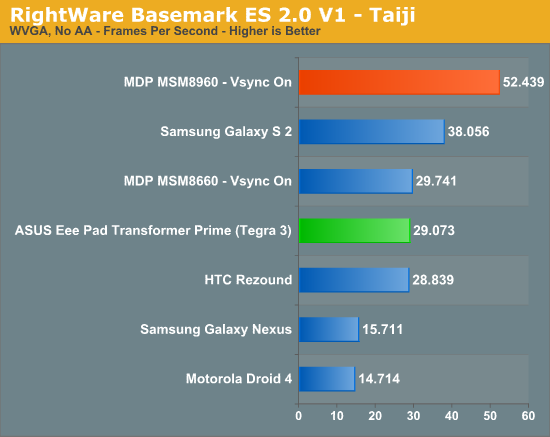 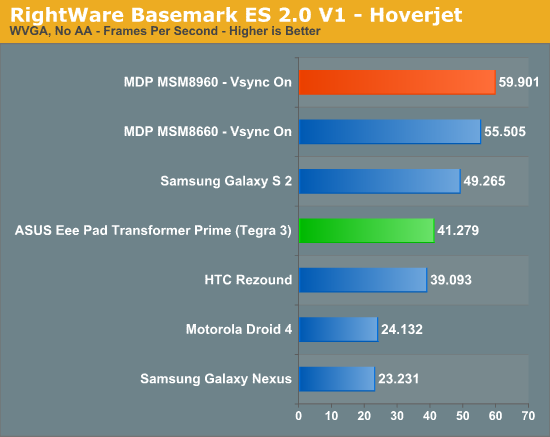 I'm still not totally sure why Basemark favors Adreno architectures so much but the results are what they are. 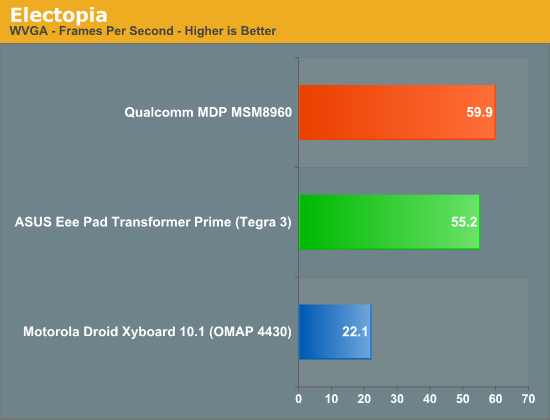 We do bump into Vsync limits with both the Tegra 3 and Qualcomm MDP at 800 x 480. Unfortunately Electopia doesn't allow for custom display resolutions, the only options are WVGA or native. The MDP has a native resolution of 1024 x 600 compared to the TF Prime's 1280 x 800 making a comparison at native resolutions unfair. That being said, according to Qualcomm the MSM8960 should be able to deliver around 40 fps at 1280 x 720 compared to the 24.6 fps we measured on the Transformer Prime at 1280 x 800.

Although Electopia is a game, it's still tough to tell how killer 3D titles on Android will end up performing. Oh the things I would do for an Unreal Engine 3 benchmark on Android...