Well, today is a day that everyone was expecting but not the most exciting day of the month. Today, Intel officially releases the spate of 7-series chipsets for their 3rd generation Core microarchitecture processors (read—Ivy Bridge), despite the actual release of the processors being another three weeks away. This means that today we can actually look at, test, or purchase the range of motherboards that natively support Ivy Bridge. However, we can’t officially publish all the benchmarks for these products using Ivy Bridge until that date three weeks away (to be honest, we are still testing!). So today we are going to have a good in depth look into the Z77 chipset itself, and the review products we have received to let you know what we think looks good. All these boards today will be fully reviewed, warts and all, with Ivy Bridge, as close to official release as possible. 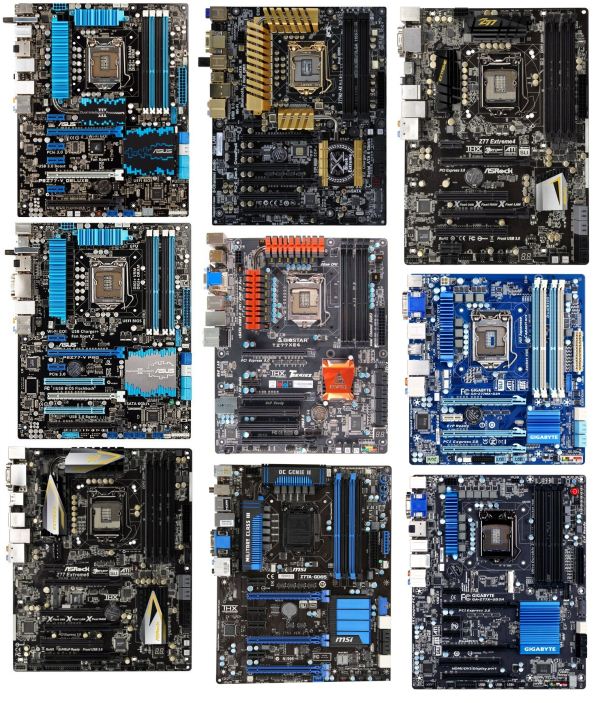 The boards today are from ASRock, ASUS, Gigabyte, MSI, ECS and Biostar. All these boards will natively support Sandy Bridge processors, and be fully upgradeable to Ivy Bridge silicon when the processors are released.

The important things to note about the Z77 chipset will be its differences to all things Sandy Bridge/Cougar Point, typically in relation to the Z68 platform. Rather than have a split between a chipset with video outputs and a chip without video outputs, all motherboards in the Z77 (and H77) will natively support video outputs (if the motherboard manufacturer wishes to use them). There will also not be a chipset issue as there was back this time last year with Cougar Point—so none of this B2/B3 nonsense that confused consumers.

In comparison to the previous chipsets, what we can see is simple from a table:

Segregation is quite apparent for the consumer—a Z means you can overclock an appropriate CPU, and a ‘77’ means that you can take advantage of Intel’s SSD smart caching.

The chipset diagram above shows the layout of the Intel DZ77GA-70K motherboard, showing sixteen PCIe lanes from the processor. The astute will note that only one PCIe lane is coming from the PCH to the PCI Express Switch, which powers the PCIe to PCI bridge (and thus PCI and IEEE1394a) and the PCIe 2.0 x1 ports. This would mean that users of the DZ77GA-70K may experience bandwidth limitations when PCI and PCIe x1 devices are used.

We still have 16 PCIe lanes from the CPU, but with the new chipset these are fully and officially rated at PCIe 3.0 speeds if you have the GPUs to take advantage of this feature. This becomes more apparent in multi-GPU setups, where the 16 lanes are split between the slots. Typically, this will be in the form of x16 for single card, x8/x8 for dual GPU, and x8/x4/x4 at tri-GPU. Having an x4 PCIe 3.0 is equivalent to an x8 PCIe 2.0, but only if you have a card that can take advantage of PCIe 3.0.

Due to this feature with the CPUs, the chipsets will have to adhere to PCIe 3.0 compliance, to deal with the transfers and lane layout design. A novel addition that we will see on many of the high-end boards is a series of onboard chips to increase the number of available lanes. These are known as PCIe 3.0 PLX PXE chips, which increase the number of lanes on the motherboard from 16 to 32—all rated PCIe 3.0. This also raises the cost of the motherboard, perhaps as much as $10-$15, so it is worth thinking long and hard if you really need that tri-GPU setup.

The other long awaited addition found on Panther Point is the native implementation of USB 3.0 that comes directly from the chipset. The chipset will only provide two USB 3.0 headers, giving four ports total, either in the form of rear panel additions or an onboard header (this is at the discretion of the motherboard manufacturer). For many low-end boards, this eliminates the cost of a controller from the product. For high end SKUs that typically have 4-6+ USB 3.0 ports, while it does reduce the number of controllers by two, some PCB real estate will still be utilized by USB 3.0 controllers.

The Panther Point chipset comes with a few additional features that may be of benefit to some users. Partially derived from the processors themselves, the chipset now supports DDR3L thanks to its power gated DDR3 interface. This is a primary benefit for the lower end processor and chipset products (that is, all things mobile), but we will see if this moves its way into the mainstream or HTPC versions of Panther Point.

For the high-end power user, the chipset is now geared to handle memory that is more powerful. Again, thanks to the improvement on the new processors, these combined systems should be able to handle (with ease) DDR3-2800 memory. The memory dividers work similar to the gear ratios in Sandy Bridge-E, with users able to call a larger array of memory dividers than before with up to 200 MHz increments. This is of great benefit to the integrated graphics on the new generation processors, which should benefit from the purchase of a higher end memory kit to provide enough bandwidth.

We are still going to play with dual channel memory for the time being on consumer platforms. As this processor change is only a tick (process node decrease), we will have to wait for a tock or two in order for the memory subsystem to change to a larger number of channels. As seen on X58, tri-channel memory/6 slots was fairly cumbersome on motherboards, however on Sandy Bridge-E the quad channel memory (should Intel want to move in this direction) would still allow four slots on the board for an increase in memory bandwidth. However for now, dual channel it is.

If you happen to purchase ASUS for Ivy Bridge, there is also a little treat in store, as they have reworked the memory sub-system. Their new method stunned Intel engineers, but should provide distinct memory speed advantages. Simply put, instead of memory banks being read consecutively, the memory is read in parallel. We are awaiting more detail regarding how this feature works.

It has been well documented over the past few months that the top end model of the new processors should have a TDP of 77W. This is just shy of 50 watts less than the top models seen in Sandy Bridge-E, but more importantly, down from 95 watts as shown by the 2600K/2700K processors of Sandy Bridge. This does force a small change with the power delivery on Panther Point/Z77 products.

With less TDP to cater for, the motherboard manufacturers can spend less on the power delivery to get it to work. So there is a chance that the days of '24 phase power’ are long gone, and we will be dealing with less phases. Fewer motherboards will have dual 8-pin 12V connectors, and unless you go high end, may only require one 4-pin 12V connector to get the job done. Obviously if you apply an overclock, having access to more current (and thus more power) is of major benefit, but for the majority of system builders who will run systems at stock, this could represent savings in the construction being passed on to the consumer.

However, this does lend itself to potential issues when used in conjunction with Sandy Bridge processors—having a power delivery system less robust than Z68 could perhaps hinder Sandy Bridge overclocks.

To confirm what has been said in news articles around the world, the Intel 7-series chipsets will be backwards compatible with the Sandy Bridge (Intel 2nd Generation Core Microarchitecture) processors from the point of sale. All motherboard vendors should have this functionality built into their BIOSes. The beauty lies not in backwards compatibility but in releasing chipsets to take advantage of the new features—this is something AMD has done well with in the past.

In addition, a significant number of Intel 6-series chipsets (P67, Z68) should be forwards compatible with the Ivy Bridge processors, pending a BIOS update. Thus, current Sandy Bridge processor owners wishing to upgrade should make sure they have an appropriate BIOS before installing a new processor in their 6-series motherboard.