For $150 Acer will sell you a keyboard dock that gives you a full sized USB 2.0 port, a QWERTY keyboard, trackpad and integrated 27Wh battery. The dock charges the tablet, and the tablet powers the dock once the dock’s battery is exhausted. If this sounds familiar it’s because it’s exactly what ASUS has been offering since the first Eee Pad Transformer in 2011.

The tablet/dock mating process is actually one of the smoothest I’ve seen thus far. The tablet just slides in and locks in place - there’s no struggling or any real pain points in the process. Once connected the tablet seems pretty secure. As the dock uses the charging port to connect to the tablet (for both power and data), the dock gets its own charging port on the left side that you can use to power the setup. 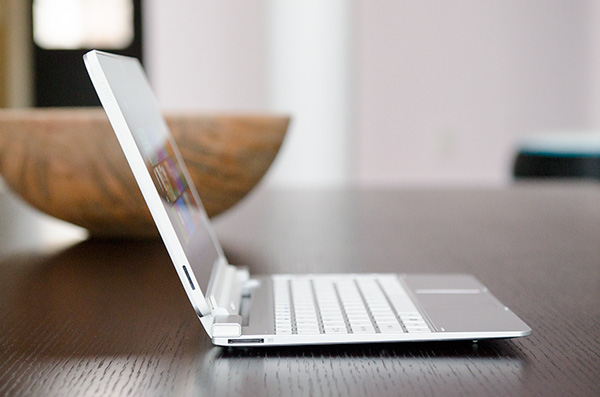 The docking hinge can rotate up to 295 degrees, letting you face the W510 away from you with the keyboard pointing down. The keyboard is disabled once you hit opposite lock on the hinge, and what you end up with is an approximation of Surface’s mild-tilt-away operating mode. It’s good for presenting content to someone else or watching a video, but the angle is a bit too small to make it useful on a surface that’s significantly lower than you. 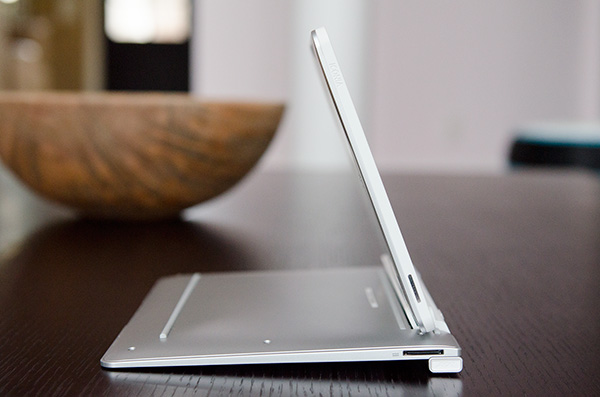 When assembled the tablet+dock loses the svelte form factor of the W510 itself. The combination grows to 13mm at its thinnest point and 23mm at its thickest. The weight more than doubles to 1265g (up from 568g for the tablet alone). The resulting device isn’t reminiscent of a tablet and instead reminds me a lot of a netbook. Ultimately where you fall on this issue depends on whether or not you want more of a tablet or notebook experience. The Surface approach retains the tablet experience while giving you some of the benefits of a standard clamshell notebook via the touch/type covers. The Acer/ASUS approach on the other hand gives you more of a flexible notebook experience, with the benefit of added battery life and IO expansion. As with most things, it’s a trade off.

In presenting Surface RT, Microsoft talked about the path that took it to building a fairly uncommon 10.6-inch tablet. The motivation behind the unique form factor was two fold: 1) Microsoft wanted to deliver a good multitasking experience under Windows 8’s Modern UI, and 2) it wanted to deliver a good typing experience with the touch/type cover attached. With a 10-inch tablet Microsoft felt the keyboard experience would suffer too much, but at 10.6-inches it could design a keyboard with big enough keys to approximate a good notebook keyboard. 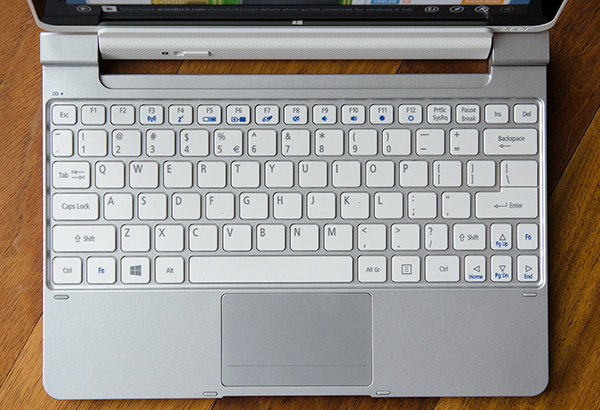 There’s no better proof that Microsoft was right than to use the W510’s keyboard dock. While typing on Surface felt laptop-like from a size perspective, the W510’s dock feels more netbook-like. The alphanumeric keys measure around 13 x 14mm, compared to 16 x 16mm on Surface’s Touch Cover (71% coverage) and 17 x 17mm on Type Cover (63% coverage). That’s not to say that you can’t get used to it, it’s just immediately apparent that the keyboard is smaller than normal.

Key travel is pretty decent but the feel is mushier than I would like. Key placement is solid though, I didn’t have any trouble just jumping into the W510’s dock and finding my way around without staring at keys. Transitioning between the W510 and other physical keyboards wasn’t an issue either. I did occasionally have an issue where a key would repeat itself a bunch when typing (e.g. hellllllllllllllllllllllo instead of hello), but I'm not sure if that was a dock or Windows 8 problem.

What I couldn't get used to however is the trackpad. It’s almost 2013 and we’re still having issues delivering good PC trackpad experiences. The hardware, firmware and software to do this right is out in the wild and it’s not all that expensive, it just seems underutilized for whatever reason.

The W510’s trackpad is actually a clickpad, with no dedicated buttons but rather a horizontal line below which depressing the pad registers as a click. As with most clickpads, if you’re the type of user who rests a thumb near the “button” while you mouse around with your index finger you’re going to have a bad time. The W510 dock’s clickpad does a horrible job of rejecting any resting fingers/thumbs and instead you get very erratic, almost unusable tracking. Single finger operation is mostly ok, but even then there are issues. The clickpad seems to do a terrible job of rejecting noise in general. Sometimes just having a finger near the trackpad will be enough to throw off tracking.

Overall the clickpad is where the dock experience breaks down. The keyboard works well enough, but the clickpad is nothing short of frustrating. The good news is that you get a full USB 2.0 port from having the dock, so you can always plug in an external mouse, but that seems like a solution to a problem that shouldn’t have existed in the first place. I don’t know why we’re still dealing with clickpad issues, but I’m going to have to think up something creative to deter them in the future.

The W510 ships with a full install of 32-bit Windows 8. As I mentioned earlier, there’s no free-Office with Windows 8 - that’s a Windows RT exclusive. On the plus side, you can still install traditional desktop mode applications which you can’t do on Windows RT. 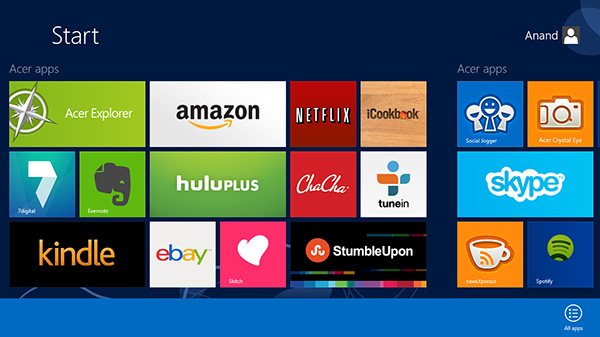 Acer doesn’t do a whole lot to customize the Windows 8 experience, but there are a bunch preloaded apps that come on the system. The good news is that most of these apps aren’t things that run in the background at startup.

The bigger issue I had with the W510’s software experience had to do with stability. If I left the camera app running and the system went to sleep I’d frequently come back to a machine that had to reboot itself. Most of my stability issues seemed related to the camera app but every now and then apps would crash or I’d encounter an unexpected reboot. It’s clear to me that there are still a lot of rough edges with Windows 8, although interestingly enough I didn’t seem to have as many stability issues with Surface RT as far as I can remember.