With the ASRock Z77 OC Formula being around the top of the ASRock range (Extreme11 and Fatal1ty branding aside), we get the full meat of the latest BIOS on hand, with all the additional features ASRock likes to add in to its products.  Over the generations ASRock has dabbled in various faces of their BIOS, going from on old blue livery to what is now a nice looking feature with decent resolution images and no color conflicts.  Also in the pocket of ASRock is their Description window on the right hand side which informs users about the option they are changing.  Every BIOS should have one of these.

A few words about BIOS versions – for our review we used BIOS 1.80 as it is the latest public release.  Users will have to upgrade to above BIOS 1.30 if they want Multicore Acceleration, and to 1.60 or above for Windows 8 compatibility.  In order to keep things fair between reviews, I always update to the latest BIOS available to the public – no media or beta BIOSes which may influence results that the public never gets to use.

There is also a semi-important issue worth noting.  In an overclocked state using the Auto OC profiles, the BIOS does not reduce the system speed and voltage down to idle when no load is applied.  The voltage given to the CPU is constant, which could increase heat generation and power draw during those idle scenarios, albeit by a small amount.

To the BIOS itself, and unlike most other BIOSes we are not greeted with an easy mode for those new to the BIOS.  We get straight to the heart of the BIOS in the Main tab, which gives us some of the vital information I expect all boards to share on entering the BIOS: the motherboard model, BIOS version, the CPU installed, the speed of that CPU, the memory installed and the speed of the memory.  What is missing is some CPU temperatures and perhaps a rundown of the important voltages, just as a quick visual check.  In the Main tab we also get an option to adjust which screen we see when entering the BIOS – useful for competitive overclockers to go straight to the OC options upon entry. 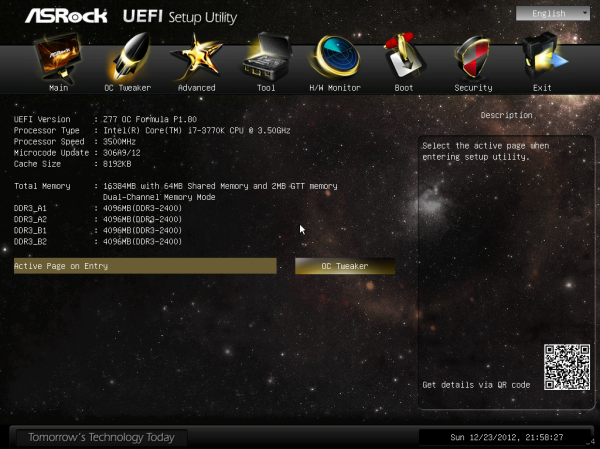 With the board being called the Z77 OC Formula, the OC Tweaker tab is where all the action is.  In this tab our options are split up into suitable sub headings which all make sense, and every option available gets an explanation in the description box. 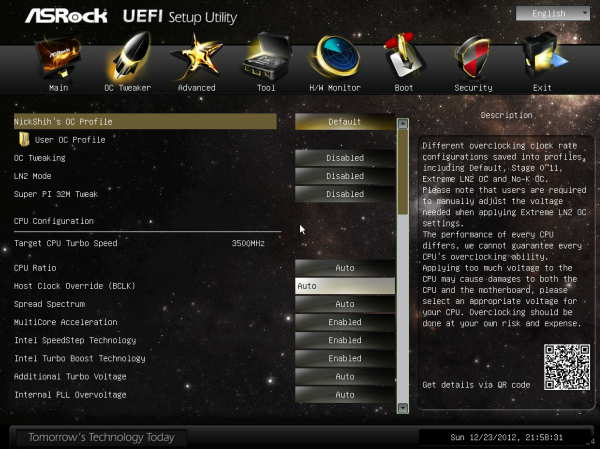 The first set of options gives us the Automatic OC list from ASRock in-house overclocker Nick Shih.  This opens a menu to give options between 3900 MHz and 5000 MHz in 100 MHz increments for an i7-3770K, along with an option to get 5565 MHz if you are running sub-zero temperatures (this setting is not recommended unless you are using dry ice/phase/LN2 on the CPU).  For a full rundown of these options, check out our overclocking section of this review.

The OC Tweaking and Super Pi 32m tweak are options specifically for competitive benchmarking, but if a user wants to manually adjust the overclock, the options below the CPU configuration heading are the place to start.  We can adjust the CPU ratio either per core or all cores, along with the BCLK.  MultiCore Acceleration is ASRock’s term for applying the top turbo bin on the CPU while at stock – any change in the CPU Ratio will cause this to disappear as it will not be needed.  Other standard options relating to SpeedStep and Power Limits are also in this menu. 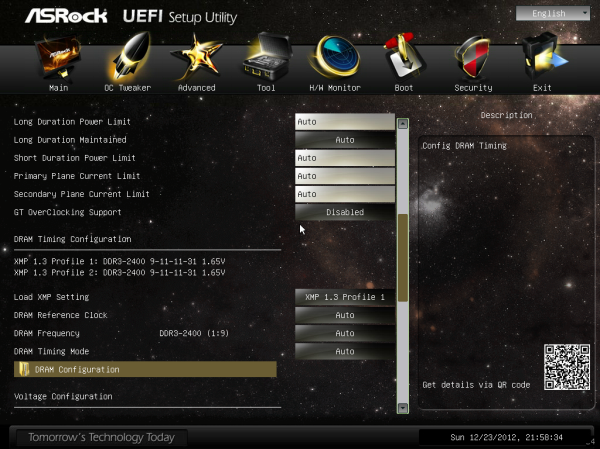 The memory options allow for XMP settings, changing the memory straps, and DRAM configuration.  In terms of subtimings, the OC Formula allows a significant amount of timings to be adjusted (most of which I still don’t understand), but perhaps not as many as some rival boards. 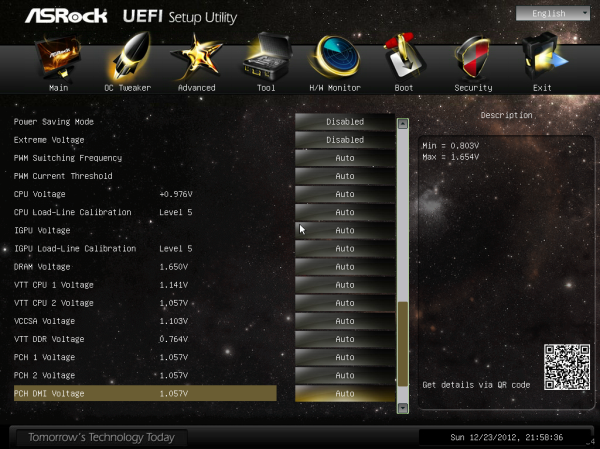 The voltage options are also substantial enough to have fun with.  Aside from the normal voltages and Load-Line Calibration options we get on most Z77 motherboards, options such as PWM Switching Frequency and PCH voltages are also available.  When selecting one of the Nick Shih overclocking profiles, all of these are adjust automatically to take into account almost every CPU out there (though your mileage may vary).

Moving on through the BIOS we get an Advanced Tab which offers all the other system configuration tools for onboard controllers, storage, integrated graphics, audio, RST et al.

The Tool tab is something newer on the ASRock front – over the past 12 months ASRock has been adding new features like the System Browser, Online Management Guard, Dehumidifier and Internet Flash.  These were dotted around the BIOS, but now ASRock have placed them all under one menu: 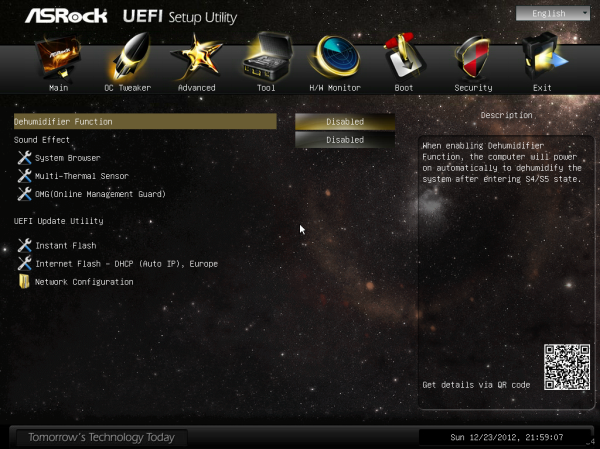 The System Browser is a 2D version of Gigabyte’s 3D BIOS, except instead of offering options for each of the areas of the motherboard, ASRock uses this to determine whether installed components are actually detected by the system.  This is really useful if at random a SATA device is not found or a memory stick stops functioning – take a look in the System Browser before opening the case to see if the BIOS still recognizes it is installed. 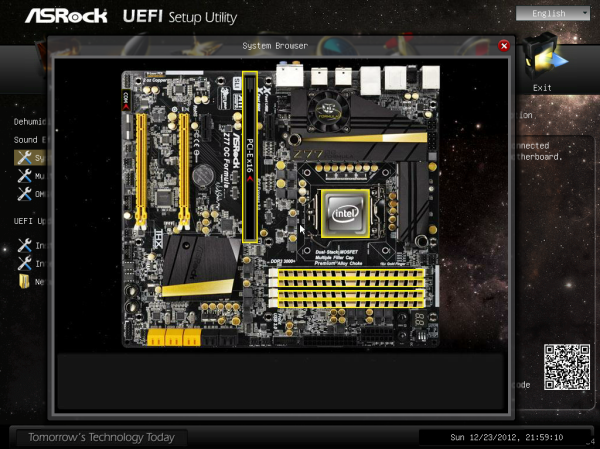 As noted in the Z77 OC Formula overview, the motherboard has a total of thirteen motherboard temperature sensors as well as those used for the CPU and chipset.  The Multi-Thermal Sensor option in the Tools tab lets you see where they are, and hovering over each one gives a temperature readout.  All that is missing is perhaps a heat map generated by the values produced. 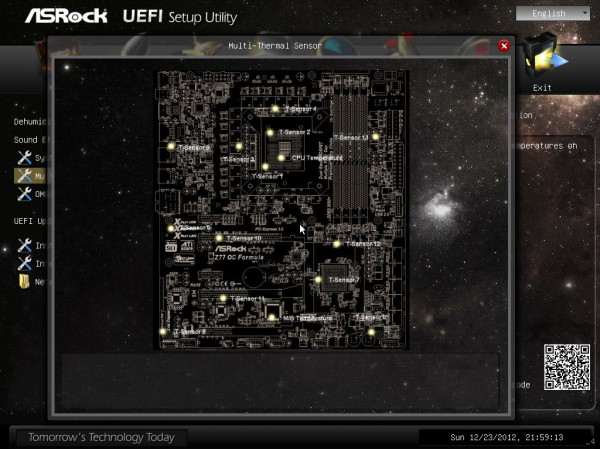 The Online Management Guard (and badly punned acronym OMG) in the Tools menu allows users to be able to disable network access for given times of the day.  This applies to all users, meaning if you want the children off the internet at 9pm, no-one can go on until OMG says so.  This is despite the fact that it is not password protected, and anyone can navigate into the BIOS to change it. 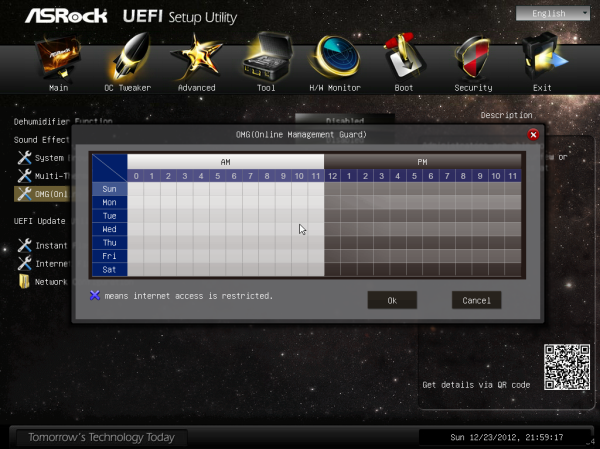 Also in the Tools tab is the option to update the BIOS, either by a file on an attached USB stick, or through the Internet.  The BIOS will probe the local ASRock server for the latest BIOS update and perform the process automatically for the user.  The main limitation is that the machine needs to be directly attached by Ethernet to the DHCP router in the property – no WiFi or ICS allowed.

All the fan controls get placed in the H/W Monitor tab: 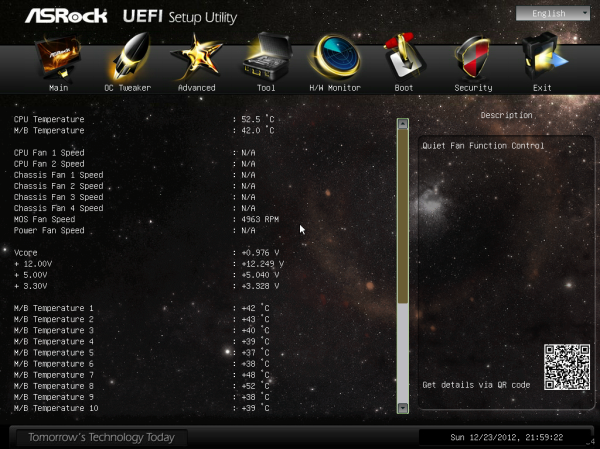 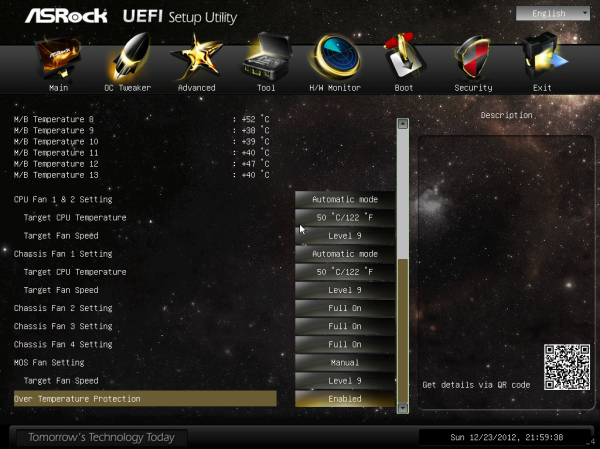 Along with all the temperature sensor readings (notice the motherboard sensors are only to the nearest degree), we get our basic options for the fans.  These options by default are all placed on 100%, but can be adjusted following the old ASRock system of target CPU temperatures and target fan speeds.  The OS controls for fans are a lot easier to use and offer a greater selection of options.

Elsewhere in the BIOS are our booting options, with an option for Fast Booting when using Windows 8.  All that we are really missing is a Boot Override option to allow for a single time boot from a selected device.