Years of ASRock software has been oriented around the ASRock eXtreme Tuning Utility (AXTU), which has offered basic monitoring and fan selections alongside a series of basic overclocking tools and power saving options.  Skip forward and we get implementations of XFast USB, XFast LAN and XFast RAM, all designed to speed up their various parts of the system, and then Fatal1ty ASRock boards get similar selections but with Fatal1ty branded skins.  The Z77 OC Formula takes a similar approach, and our AXTU interface is reskinned as ‘OC Formula Drive’, but we get severely upgraded fan controls, options related to the temperature sensors, a memory configuration tool and another tool related to the Rapid OC buttons on board.

The main hub is the reskinned AXTU in the form of the OC Formula Drive.  Amazingly the reskin makes it a lot easier to read, although the navigation model is still the same as before, with a list of options on the left hand side and the rest of the options on the right.  As a general feeling I find it a little cumbersome to look at, and it does not really fit well with a monitor after an OS install if the screen size has not been increased or video drivers installed.  But there is an element of improvement over previous versions. 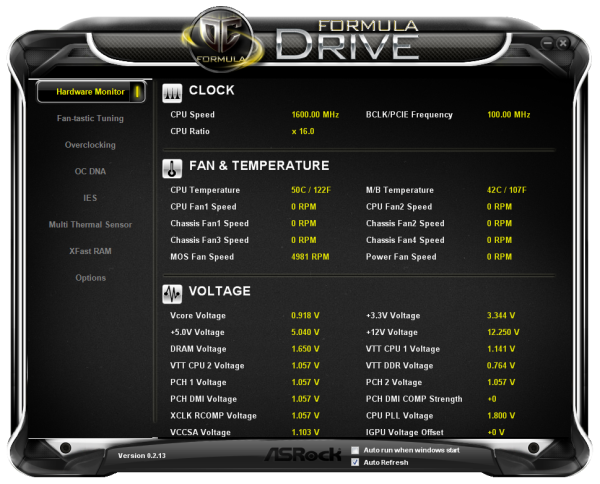 The initial OCFD menu is our basic hardware monitor listings, giving CPU speed, temperatures, fan speeds and voltages.  Like with the front page of the BIOS, if something like this is presented, I also want the motherboard model, BIOS version, CPU model and memory installed information given to me.

The big change is in the fan controls: 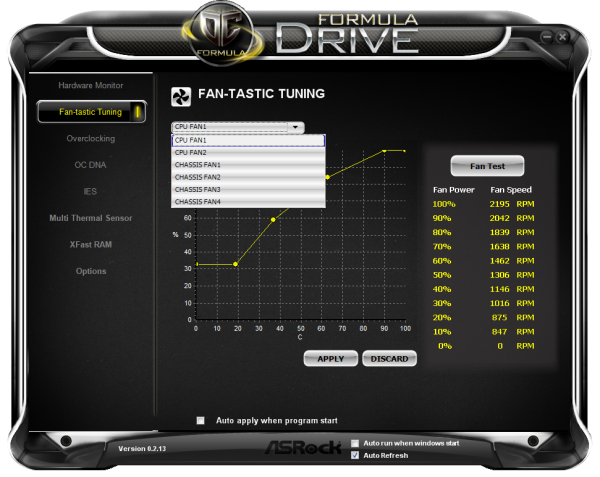 As part of the ‘Fan-tastic Tuning’, the system will test each of the six controllable fan headers in terms of RPM against power applied.  As we have mentioned a lot in the past, the fan speed and output is not directly proportional to the power applied, and at last someone at ASRock has acknowledged this.  As seen in the screen shot, the fan I use follows this trend: 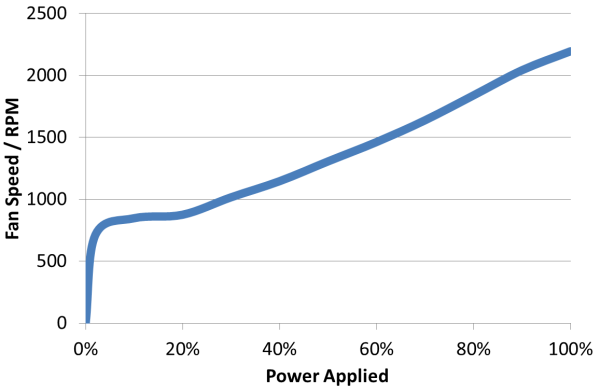 Having that information allows me to select my multi-point fan curve in the GUI with better accuracy.  All that is missing from our interface my graph above, and the ability for hysteresis whereby the fan will stay at a higher speed as the system cools down until it reaches a certain temperature, thereby cooling down faster.  It should be noted that for the fan options to stick across reboots, users should select the ‘Auto Apply’ and ‘Auto Run’ options at the bottom of the software.  It also wouldn’t go amiss if ASRock supplied three or four preset fan profiles, such as Silent, Low Power, Turbo, Always On etc.

Next up in OCFD is the overclock settings, in which not much has changed over the AXTU implementation.  The sliders look nicer, and we get options for hot-key overclocks by the button in the top right. 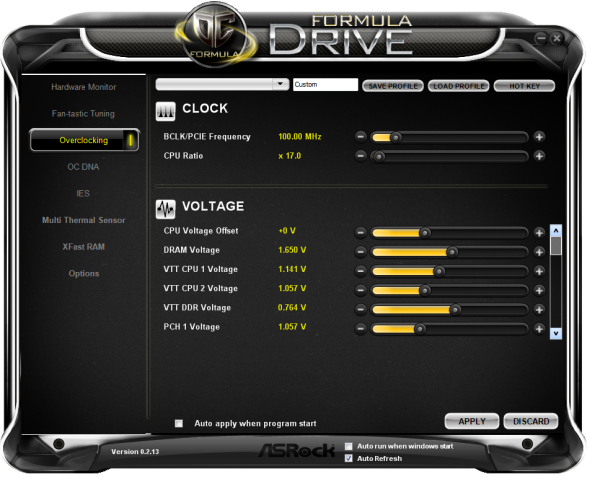 OC DNA deals with saving overclock settings, whereas IES is a one button selection to reduce power consumption by adjusting the amount of power phases being used.

The Multi-Thermal Sensor option is almost analogous to the detail given in the BIOS, whereby we get a list of temperatures and an image showing where those temperature sensors are with the corresponding values.  I think it is great to have this level of detail, and all that is missing is a heat-map visual representation of these temperatures.

XFast RAM, as we have covered before on several ASRock boards, allows the user to partition part of their memory off to a RAMDisk, and adjust the system setup to use the RAMDisk for temporary files.  A lot of software produces temporary files during calculations, especially when the files are large (video editing, image editing, compression) or just for quick recall at a later date (Internet Explorer), and having a fast read source (up to 5 GB/s in most cases) can speed up the response time of the system.  On a personal note, the most memory I have ever used in daily use was 7.7 GB, which was while playing F1 2011 at max settings as well as having all my regular work windows/programs/Chrome tabs open at the time.  Thus if users go down the 16GB/32GB route, having a RAMdisk for temporary files might not incur much of a penalty in regular usage. 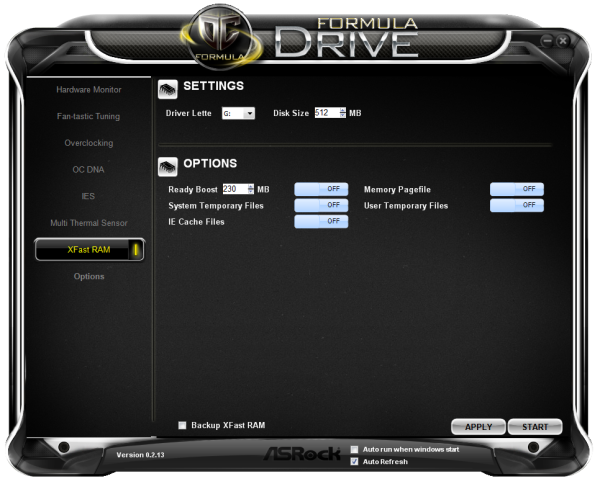 On the top right of the motherboard are a pair of +/- buttons.  Like similar features on other OC-oriented motherboards, these buttons allow the user to change the CPU speed or voltage on the fly, rather than through OS tools or the BIOS. 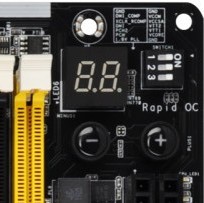 For the enthusiast or power user they have little use, but in terms of competitive overclocking having the option to tweak up another MHz or two can mean the difference between first and second.  More often than not the OS can hold a higher MHz than the POST can, so by adjusting the speed after getting into the OS can help with scores.  Also, some benchmarks are a mix of CPU and GPU tests, and a CPU can sometimes be clocked higher during GPU tests than CPU tests due to the loading, meaning having an on-the-fly adjustment tool can help there as well.

The tool itself allows the user to adjust BCLK, CPU Ratio or CPU voltage with the buttons, although only one at a time and to change between them requires hotkey adjustment.  A small failing in the system is that if the software is not running, there is no default change with the buttons, and having the software running could introduce instability. 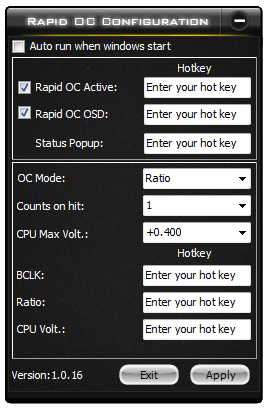 Aside from the weird name (I would prefer Timing Configuration Tool), the Timing Configurator is a basic variation on ASUS’ MemTweakIt utility which gives a user access to the cast majority of the memory subtimings.  Again, in the world of extreme overclocking, having the opportunity to adjust these settings in the OS can help achieve those extra few points. 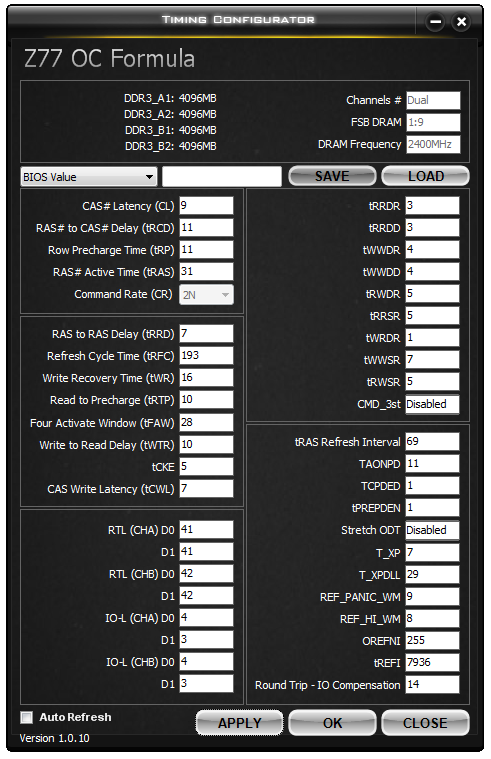 The stalwart of the package XFast USB also makes an appearance.  XFast USB performs a small driver swap with the Intel Windows drivers in order to enable faster transfer at the expense of latency.  In previous reviews this works really well with USB 2.0 and USB 3.0 under Windows 7, though in Windows 8 the default drivers already have various improvements implemented which where possible can supersede XFast USB if the hardware allows. 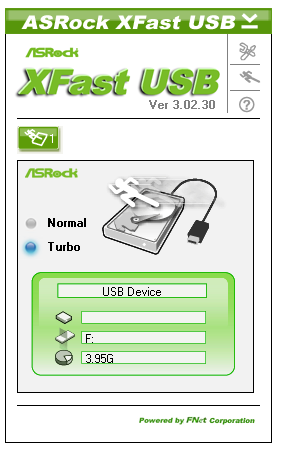 Also part of the package is XFast LAN, a software based network monitoring and configuration tool.  XFast LAN is a licensed and skinned version of cFosSpeed, downloadable for 10 Euro, but which ASRock has a bulk licensing deal for all their motherboards.  Through XFast LAN, the user can monitor their network usage, organize which programs have higher priority (VoIP > Game > Browser > Download for example), affix online budgets to each connection, as well as a host of other utilities. 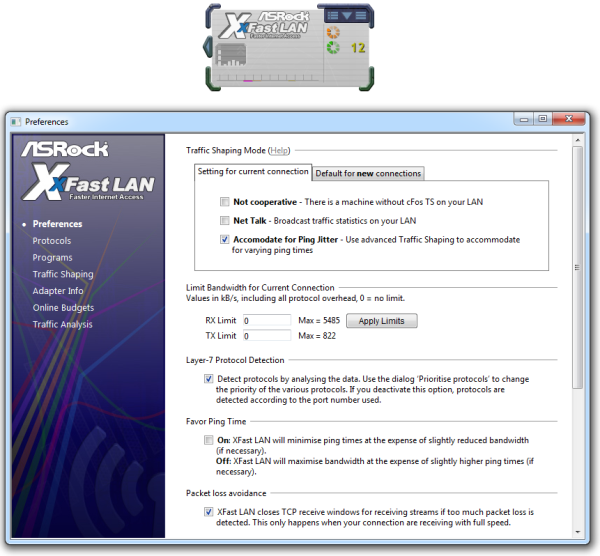 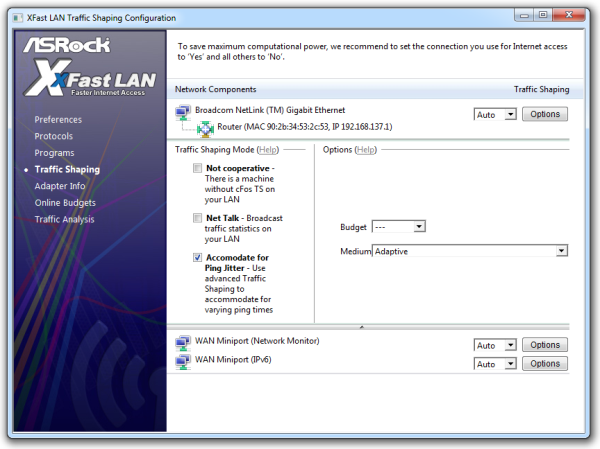 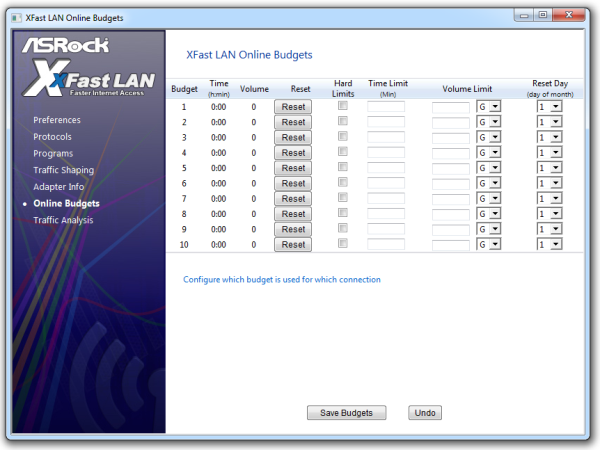