The Tiki tower is quite compact, measuring just 4" wide. It's bigger than a new Xbox 360, but not by a huge margin. Once you consider how much more powerful this Titan equipped Tiki is, the 360 comparison becomes downright ridiculous. 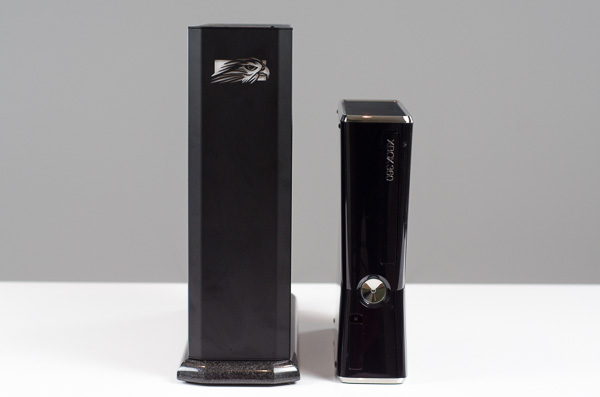 To keep the Tiki planted and from falling over, Falcon mounts it on a granite base. My review sample had a speckled black base, which seemed to be the more subtle of the available options. I appreciated the functionality of the base and the fact that my PC was sitting on a slab of granite sort of faded away. It's difficult to describe the visual impact of the Tiki chassis. Tiki's industrial design doesn't break new ground, but its aesthetic does scream sleek gaming PC. I like it. It's well executed. 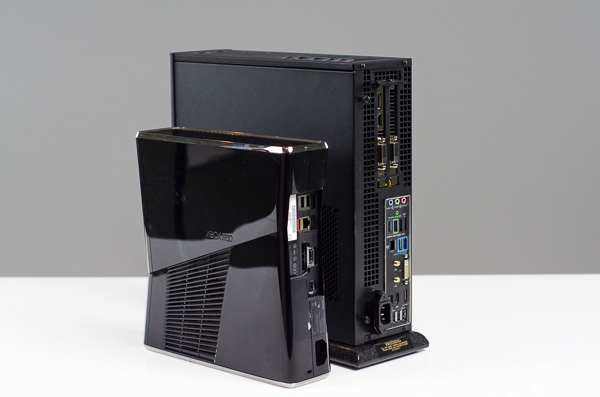 There are two USB 3.0 ports at the top of the chassis, along with a pair of audio jacks for your mic and headset. The slot loading DVD drive is also accessible from the top of the chassis. Around back you're quickly reminded that this is definitely a high-end gaming PC. There are the twin DL-DVI ports, HDMI and DisplayPort outputs driven by the GeForce Titan, as well as two eSATA ports, four USB 3.0 ports, four USB 2.0 ports, GigE, and all of the display outputs driven by the processor graphics. The ASUS board also integrates WiFi, which you can connect an external antenna to. Your standard set of analog and optical audio jacks round out the coverage. All of the labels on the IO panel are upside down so that you can lean over the top of the chassis and they appear right side up when you're plugging things in back there. It's a nice touch. 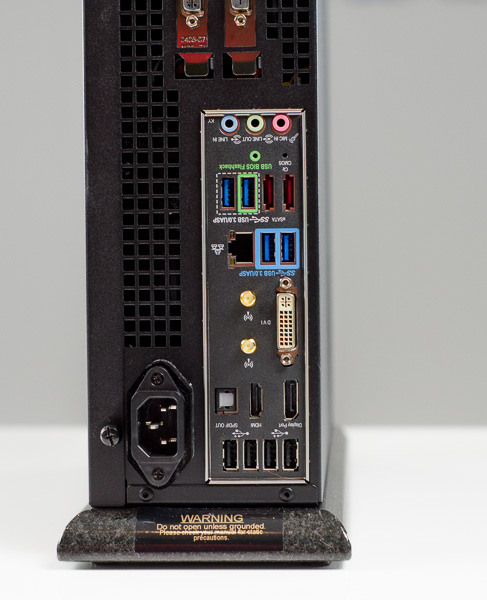 There's a healthy amount of ventilation built into the chassis. I kept a close eye on temperatures during my testing and never felt worried that I was cooking anything inside (CPU temperatures seemed to hover around 53C during heavy gaming workloads).

Despite its small form factor, the Tiki tower is remarkably simple to get inside and work on. Two thumbscrews hold the service cover in place. There's an Asetek closed loop liquid cooler mounted on the CPU, with its radiator fan mounted on the service cover so you have to be careful when opening up the machine. There's enough slack in the cooling tubes for you to lay the cover down and work on the inside of the Tiki without removing the CPU cooler. 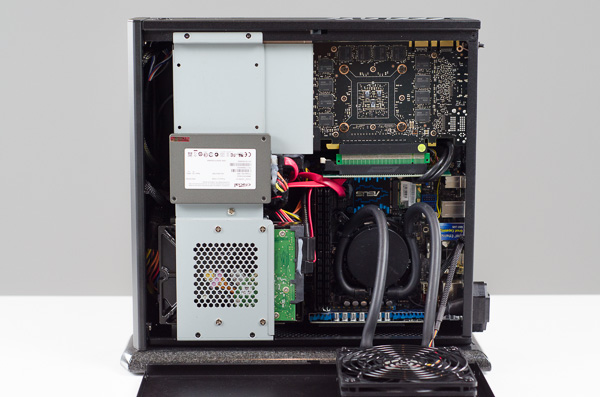 While the Tiki normally comes with a Core i5-3470, Kelt tossed in a Core i7-3770K overclocked to 4.6GHz in my review system. Falcon will perform a factory overclock on your system for free, although there's no guarantee of what speed you'll end up with.

A total of five screws hold the drive assembly in place. There's room for two 2.5" SSDs, a 3.5" HDD and a slim optical drive in the Tiki. My review sample was outfitted pretty much the way I'd build it, with a 256GB SSD and a 2TB WD Green hard drive for data storage (ok, admittedly I'd probably toss in a 512GB SSD). Falcon offers a Blu-ray drive, but my review unit had a DVD-RW instead. I don't remember the last time I used a CD or DVD to be honest. All of the power and SATA cables are glued in place (likely to ensure safe transport), although you can easily remove them if you need to. 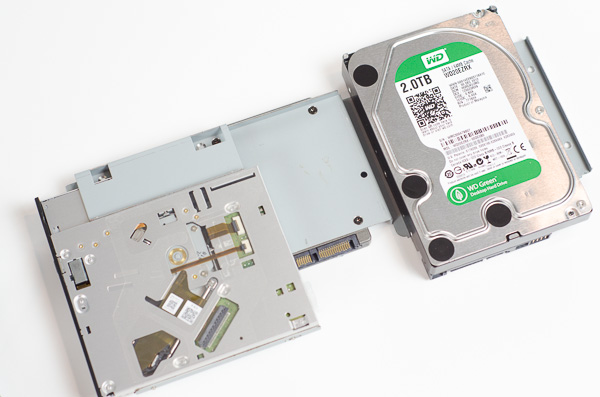 Today the Tiki ships with a Crucial m4 SSD by default, although Kelt is eagerly awaiting the arrival of the M500. I'm glad to see that Falcon isn't using a bad drive in the Tiki, and that the system comes with an SSD by default.

You do have to remove the drive assembly to gain access to the Titan card. A single retention screw and two bracket screws hold the GeForce Titan in place. Removing those will let you pull the card out should you need to replace it (or take photos of it). 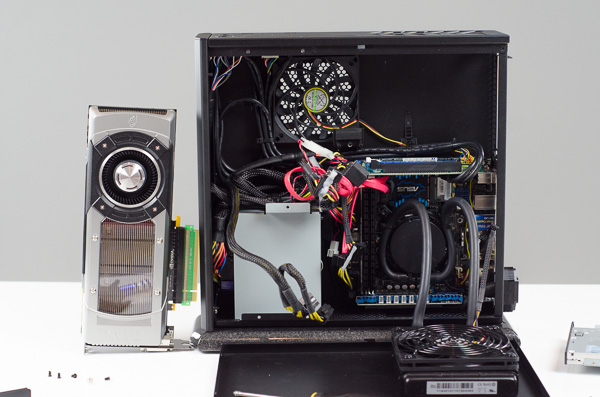 I didn't go all the way and pull out the ASUS P8Z77-I Deluxe motherboard, but you can see how the board is surprisingly accessible once you've pulled the drive assembly out of the chassis. Other than the motherboard, only the SilverStone 450W SFX power supply would need some effort to remove.

The Tiki struck me as a good combination of a compact infrastructure that remained relatively serviceable.