Because GK110 is such a unique GPU from NVIDIA when it comes to compute, we’re going to shake things up a bit and take a look at compute performance first before jumping into our look at gaming performance.

On a personal note, one of the great things about working at AnandTech is all the people you get to work with. Anand himself is nothing short of fantastic, but what other review site also has a Brian Klug or a Jarred Walton? We have experts in a number of fields, and as a computer technology site that includes of course includes experts in computer science.

What I’m trying to say is that for the last week I’ve been having to fend off our CS guys, who upon hearing I had a GK110 card wanted one of their own. If you’ve ever wanted proof of just how big a deal GK110 is – and by extension Titan – you really don’t have to look too much farther than that.

Titan, its compute performance, and the possibilities it unlocks is a very big deal for researchers and other professionals that need every last drop of compute performance that they can get, for as cheap as they can get it. This is why on the compute front Titan stands alone; in NVIDIA’s consumer product lineup there’s nothing like it, and even AMD’s Tahiti based cards (7970, etc), while potent, are very different from GK110/Kepler in a number of ways. Titan essentially writes its own ticket here.

In any case, as this is the first GK110 product that we have had access to, we couldn’t help but run it through a battery of tests. The Tesla K20 series may have been out for a couple of months now, but at $3500 for the base K20 card, Titan is the first GK110 card many compute junkies are going to have real access to.

To that end I'd like to introduce our newest writer, Rahul Garg, who will be leading our look at Titan/GK110’s compute performance. Rahul is a Ph.D student specializing in the field of parallel computing and GPGPU technology, making him a prime candidate for taking a critical but nuanced look at what GK110 can do. You will be seeing more of Rahul in the future, but first and foremost he has a 7.1B transistor GPU to analyze. So let’s dive right in.

For compute performance, we first looked at two common benchmarks: GEMM (measures performance of dense matrix multiplication) and FFT (Fast Fourier Transform). These numerical operations are important in a variety of scientific fields. GEMM is highly parallel and typically compute heavy, and one of the first tests of performance and efficiency on any parallel architecture geared towards HPC workloads. FFT is typically memory bandwidth bound but, depending upon the architecture, can be influenced by inter-core communication bandwidth. Vendors and third-parties typically supply optimized libraries for these operations. For example, Intel supplies MKL for Intel processors (including Xeon Phi) and AMD supplies ACML and OpenCL-based libraries for their CPUs and GPUs respectively.  Thus, these benchmarks measure the performance of the combination of both the hardware and software stack.

For GEMM, we tested the performance of NVIDIA's CUBLAS library supplied with CUDA SDK 5.0, on SGEMM (single-precision/fp32 GEMM) and DGEMM (double precision/fp64 GEMM) on square matrices of size 5k by 5k. For SGEMM on Titan, the data reported here was collected with boost disabled. We also conducted the experiments with boost enabled on Titan, but found that the performance was effectively equal to the non-boost case. We assume that it is because our test ran for a very short period of time and perhaps did not trigger boost. Therefore, for the sake of simpler analysis, we report the data with boost disabled on the Titan. If time permits, we may return to the boost issue in a future article for this benchmark.

Apart from the results collected by us for GTX Titan, GTX 680 and GTX 580, we refer to experiments conducted by Matsumoto, Nakasato and Sedukin reported in a technical report filed at the University of Aizu about GEMM on Radeon 7970.  Their exact parameters and testbed are different than ours, and we include their results for illustrative purposes, as a ballpark estimate only. The results are below. 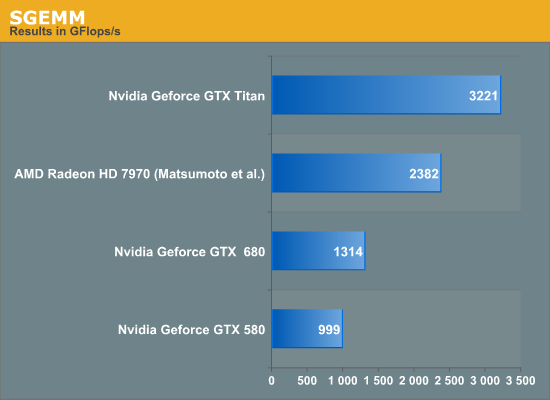 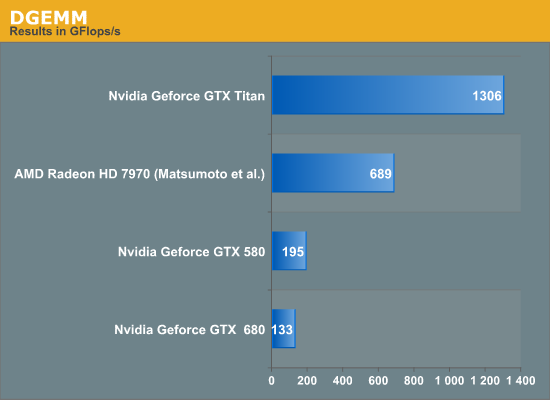 Titan rules the roost amongst the three listed cards in both SGEMM and DGEMM by a wide margin. We have not included Intel's Xeon Phi in this test, but the TItan's achieved performance is higher than the theoretical peak FLOPS of the current crop of Xeon Phi. Sharp-eyed readers will have observed that the Titan achieves about 1.3 teraflops on DGEMM, while the listed fp64 theoretical peak is also 1.3 TFlops; we were not expecting 100% of peak on the Titan in DGEMM. NVIDIA clarified that the fp64 rating for the Titan is a conservative estimate. At 837MHz, the calculated fp64 peak of Titan is 1.5 TFlops. However, under heavy load in fp64 mode, the card may underclock below the listed 837MHz to remain within the power and thermal specifications. Thus, fp64 ALU peak can vary between 1.3 TFlops and 1.5 TFlops and our DGEMM results are within expectations.

Next, we consider the percentage of fp32 peak achieved by the respective SGEMM implementations. These are plotted below. 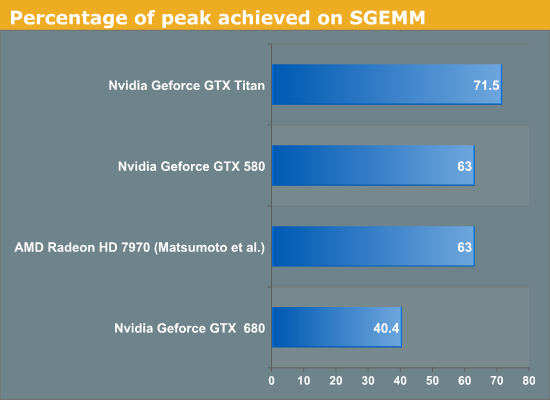 Titan achieves about 71% of its peak while GTX 680 only achieves about 40% of the peak. It is clear that while both GTX 680 and Titan are said to be Kepler architecture chips, Titan is not just a bigger GTX 680. Architectural tweaks have been made that enable it to reach much higher efficiency than the GTX 680 on at least some compute workloads. GCN based Radeon 7970 obtains about 63% of peak on SGEMM using Matsumoto et al. algorithm, and Fermi based GTX 580 also obtains about 63% of peak using CUBLAS.

For FFT, we tested the performance of 1D complex-to-complex inplace transforms of size 225 using the CUFFT library. Results are given below. 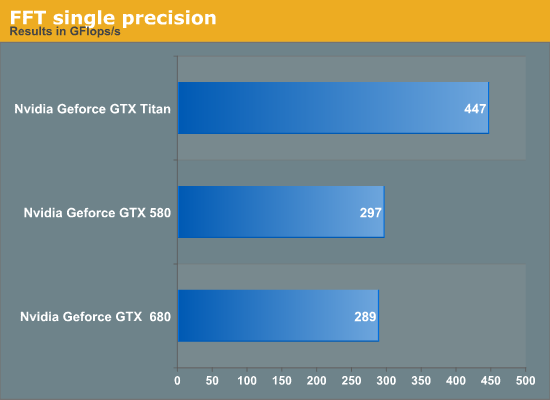 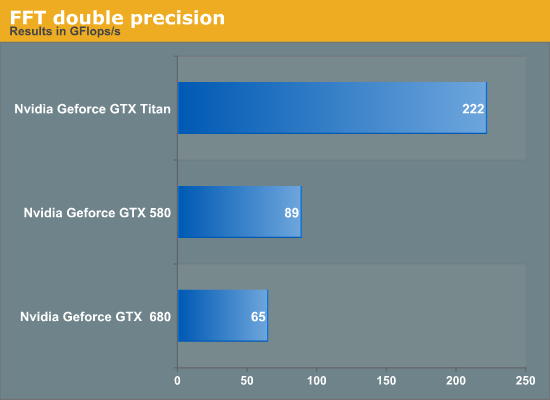 Titan outperforms the GTX 680 in FFT by about 50% in single-precision. We suspect this is primarily due to increased memory bandwidth on Titan compared to GTX 680 but we have not verified this hypothesis.  GTX 580 has a slight lead over the GTX 680. Again, if time permits, we may return to the benchmark for a deeper analysis. Titan achieves about 3.4x the performance of GTX 680 but this is not surprising given the poor fp64 execution resources on the GTX 680.

We then looked at an in-house benchmark called SystemCompute, developed by our own Ian Cutress. The benchmark tests the performance on a variety of sample kernels that are representative of some scientific computing applications. Ian described the CPU version of these benchmarks in a previous article. Ian wrote the GPU version of the benchmarks in C++ AMP, which is a relatively new GPGPU API introduced by Microsoft in VS2012.

Microsoft's implementation of AMP compiles down to DirectCompute shaders. These are all single-precision benchmarks and should run on any DX11 capable GPU. The benchmarks include 2D and 3D finite difference solvers, 3d particle movement, n-body benchmark and a simple matrix multiplication algorithm. Boost is enabled on both the Titan and GTX 680 for this benchmark. We give the score reported by the benchmark for both cards, and report the speedup of the Titan over 680. Speedup greater than 1 implies Titan is faster, while less than 1 implies a slowdown.

The benchmarks show between 16% and 60% improvement, with the most improvement coming from the relatively FLOP-heavy n-body benchmark. Interestingly, GTX 580 wins over the Titan in 3DPMo and wins over the 680 in 3DPmo and 2D.

Overall, GTX Titan is an impressive accelerator from compute perspective and posts large gains over its predecessors.