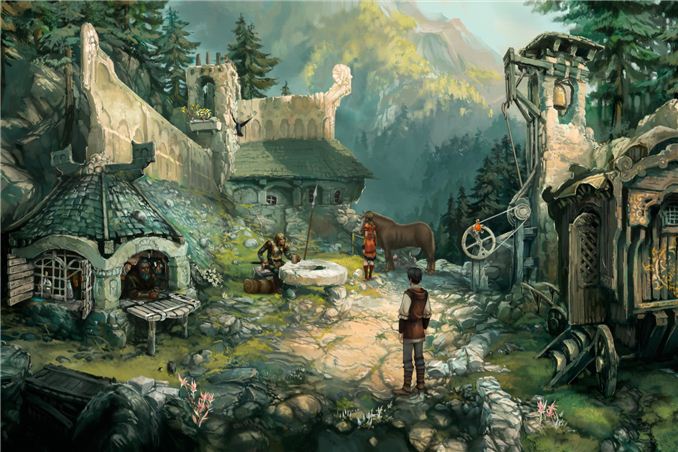 Let me start with a couple disclaimers before I get into the meat of this week’s Humble Weekly Sale. First, I grew up back in the time when we actually had to load up games from floppies, and later that graduated to the glory of 40MB hard drives. I played nearly all of the classic Sierra Online games, which ironically were not online (King’s Quest, Space Quest, Police Quest, Heroes’ Quest, Leisure Suit Larry, etc.), and as a youth I loved them – well, not Police Quest so much, as it was too tedious for my tastes. Later I graduated into playing more RPGs, and the classic point-and-click adventure games (and the text parser games they replaced) have largely given way to modern action-adventure games (e.g. Tomb Raider, Bioshock, etc.).

So I know a thing or two about adventure games, and I’ll be frank: in my opinion there’s a reason they have largely died out and become a niche market (hello linearity and trial-and-error object combination “games”). My second confession: I haven’t heard of a single one of the games in this week’s Humble Bundle, though I have heard of publisher Daedalic Entertainment.

With that out of the way, if you’re hankering for some old-school point-and-click adventuring, you might be interested in the latest weekly Humble Bundle. There are five core games available ($1 contribution or higher), and $6 or more will unlock three additional games. A few  of the games are apparently so far off the radar that they don’t even have entries on Metacritic, which might be taken as a bit of a red flag. Those that have been reviewed by a reasonable number of sites (many based outside the US) typically received fair to moderate scores, with a few enthusiastic reviews cropping up here and there. As usual, YMMV.

Here’s the complete list, starting with the core games. Any donation of $1 or more will get you Edna and Harvey: Harvey’s New Eyes (10/2012, 75%), A New Beginning – Final Cut (12/2012, 72%), The Whispered World (04/2010, 70%), Chronicles of Shakespeare: Romeo and Juliet (07/2012), and Chronicles of Shakespeare: A Midsummer Night’s Dream (07/2012). Other than the two Chronicles of Shakespeare titles, all of the games are available for Windows and on Steam; they’re also all available for OS X, with the exception of The Whispered World. I should pause here for a moment to note that the two Chronicles of Shakespeare titles really aren’t adventure games; instead they’re hidden object games where you basically click on objects based on hints in order to solve mysteries (and judging by most reviews, they’re rubbish, explaining perhaps why they’re not listed on Metacritic). Paying $6 or more gets you three additional games: Deponia (08/2012, 74%), Journey of a Roach (11/2013), and The Dark Eye: Chains of Satinav (06/2012, 75%).

Not all of the games are widely available, but with a bit of searching I found some prices. The three bonus games are, not surprisingly, more expensive titles. Deponia runs $20 on Steam, though you might be able to find a code on eBay for less than half that (and there are two sequels for Deponia if you happen to enjoy it). Journey of a Roach is brand new and currently priced at $13.49 on Steam. The Dark Eye is also a $20 Steam game. If you want any of those three, a $6 donation is obviously a better value. The Chronicles of Shakespeare games are, as mentioned, probably not worth the time required to get them (I’ve seen plenty of “free” Facebook games that look similar in concept), while Edna and Harvey ($20 Steam), A New Beginning ($10 Steam), and Whispered World ($10 Steam) bring the total value to around $100.

This is another bundle I’m going to skip, but if you’re (still?) a fan of adventuring there’s probably a few good ways to pass some hours. And if you have any personal experience with the games, let others know in the comments. On the bright side, you can always donate the money to charity (Red Cross or Child’s Play), and you could even give the games to someone else. Until next week….

PS: I regret missing a few Humble Weekly updates (several times now since I started doing these udpates), and two weeks back you could have snagged Cipher Prime's bundle with their new game Intake. It's an addictive little pill shooter, which is currently on sale (10% off) for $9 at Steam. When you consider you could have picked up four other games for $6 total (Auditorium, Splice, Fractal, Pulse), you get a good idea of the value proposition offered by the Humble Bundle. I can't promise I won't miss another update (and in fact I can pretty much guarantee I will!), so if you like these bundles I'd suggest subscribing to their email updates.