Next Stop: the Uncore 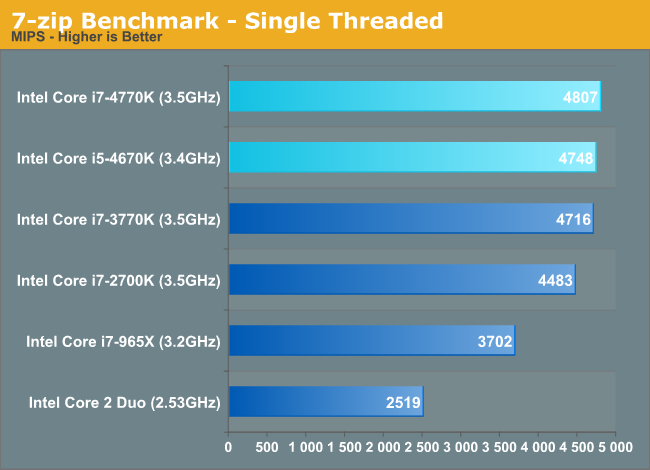 The 27% cumultative IPC (integer only) improvement of Haswell mentioned is more than just theory: Anand's review of the desktop Haswell CPUs confirmed this. The Haswell Core i7-4770k at the same clock speed is about 21% faster than Nehalem. Now that is below the promised 27% performance increase, but 7-zip is among the applications known to have very low IPC.

Let's go back to the server world. Instead of increasing the clock speeds, clock speeds have declined from 2.93-3.2GHz (Xeon 5500) to 2.3-2.6GHz for the latest high-end parts. However, when Turbo Boost is enabled, 2.8 – 3.1GHz is possible with all cores active. So the clock speed of the high end server CPUs is actually 5 to 20% lower and not 10% higher as in the desktop space. The gains Intel has made in IPC are thus partly negated by slightly lower clock speeds.

Clock speed has clearly been traded in for more cores in most of server SKUs. But the additional cores can prove extremely useful. The SAP S&D application – one of the best industry benchmarks – runs about three times faster (see further) on the latest Xeon E5-2699 v3 than on the Xeon 5500.

This clearly puts into perspective how important the uncore part is for Xeons. The uncore parts makes the difference between a CPU that is only good at running a few handpicked benchmarks (like SPECint rate) but fails to achieve much in real applications, vs. an attractive product that can lower the IT costs by running more virtual machines and offering services to more users.

Refresher: the Haswell Core The Magic Inside the Uncore
Tweet
PRINT THIS ARTICLE
Comments Locked