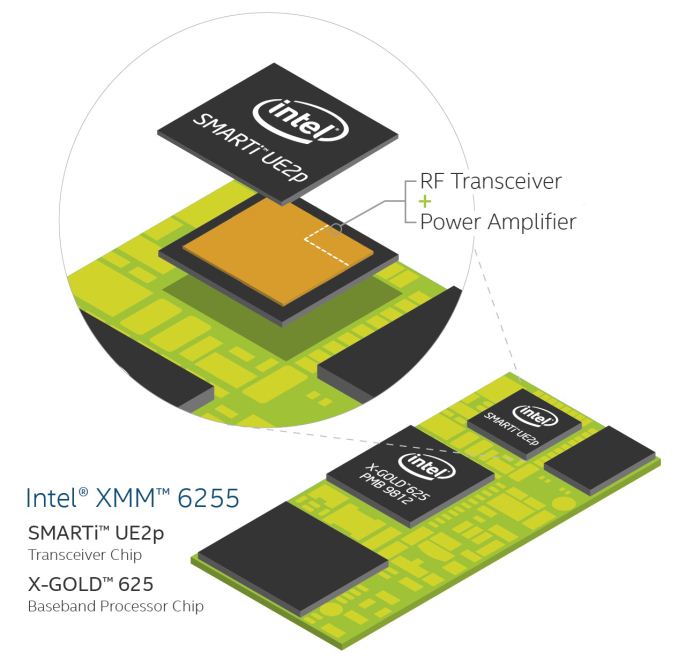 Today Intel announced their XMM6255 modem which is aimed at providing 3G network connectivity to the many future connected devices that will make up the Internet of Things (IoT). At approximately 300mm^2 in size, Intel is claiming that XMM6255 is the world's smallest standalone 3G modem. Their hope is that its small size will allow it to be integrated into small internet connected devices such as wearables, small appliances, and security devices.

XMM6255 uses Intel's X-GOLD 625 baseband and its SMARTI UE2p transceiver which is the first transceiver that integrates the transmit and receive functionality and the 3G power amplifier on a single die with its own power management. Intel claims this protects the modem from damage caused by excessive heat, voltage spikes, or overcurrent, which makes it a good choice for IoT applications like safety monitors and sensors where a hardware failure could present a safety risk. Integrating the power amplifier and transceiver on a single chip also reduces the bill of materials and power consumption, which allows XMM6255 to be put in low-cost and low-power devices.

XMM6255 typically comes in a dual-band HSPA configuration with 7.2Mbps downstream and 5.76Mbps upstream speeds. Up to quad-band 2G support can be optionally added, but requires an external power amplifier that Intel is billing as low-cost. A-GPS is also supported but is again optional.

XMM6255 represents another move by Intel to becoming a big part of the IoT market. Intel expects that the IoT market will be made up of billions of devices in the coming years, and getting a head start is a good way to make sure that many of them have Intel inside.