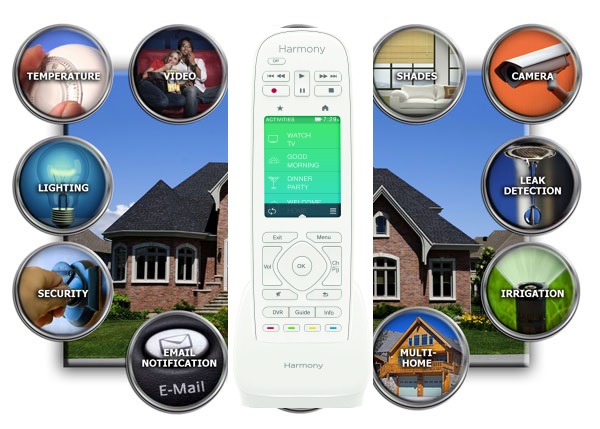 The increasing popularity of home automation (HA) equipment has fueled the Internet of Things (IoT) revolution. However, the low barrier to entry (there are innumerable crowdfunded projects in this space) has resulted in a very fragmented ecosystem. Interoperability is a major concern, and different devices use different protocols. In order to get a seamless experience across all home automation equipment, consumers have been forced to go the custom installation or integrated package route. These avenues tend to keep the joys of home automation and control out of reach of the average consumer.

The current market situation is ripe for someone to come in with a home automation gateway. Vendors such as Lowes (with the Iris product line) and Staples (with the Staples Connect initiative) have made interesting forays. However, the primary aim has been to sell more connected peripherals under the same brand. Interoperability with other HA devices is not given any importance.

On the other side, we have vendors such as Securifi trying to integrate a home automation gateway into a standard wireless router with their Almond+ product. All things considered, it would be best if the wireless router at home were to act as a home automation gateway. Consumers don't need to buy yet another device to act as a gateway purely for their IoT clients. The problems would then be making sure that various HA devices can talk to the gateway and consumers have the ability to interact with all of them using one interface. Unfortunately, these aspects have contributed to Securifi delaying the retail launch of the Almond+. Under these circumstances, the slot is still open for a unified home automation controller. Logitech is hoping to fill that void with today's Harmony Living Home launch.

Logitech's Harmony lineup is very well respected in the universal remote control market. The ability of a single remote / hub device to control multiple home entertainment devices (AVR / TV / media players) coupled with one-touch control and simple setup has been well-received by the consumers. In fact, Harmony's database of over 200K devices (which is also frequently updated) is unparalleled in the industry. The only downside of the units is the pricing aspect.

Prior to today's launch, the scope of the Harmony lineup didn't go beyond control of entertainment devices in the living room. However, the current popularity of home automation devices and the IoT ecosystem (coupled with the rapid rise of mobile devices that enable easy control via apps) make the next stop for the Harmony lineup quite obvious. Logitech is launching four new product SKUs centered around a home automation gateway hub under the Harmony Living Home category: 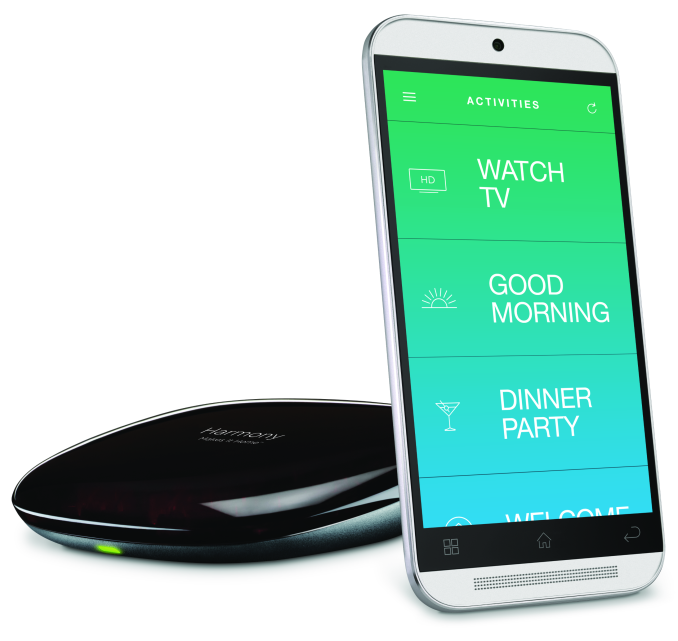 Consumers can purchase the hub alone for $100 and use the full functionality with just the mobile app. As with any home automation setup, scenes can be programmed involving multiple devices from different vendors. Logitech terms these scenes as experiences.

The next 'upgrade' in the Living Home lineup is the Logitech Harmony Home Control that costs $150. This kit bundles a button-only remote with the hub described above. 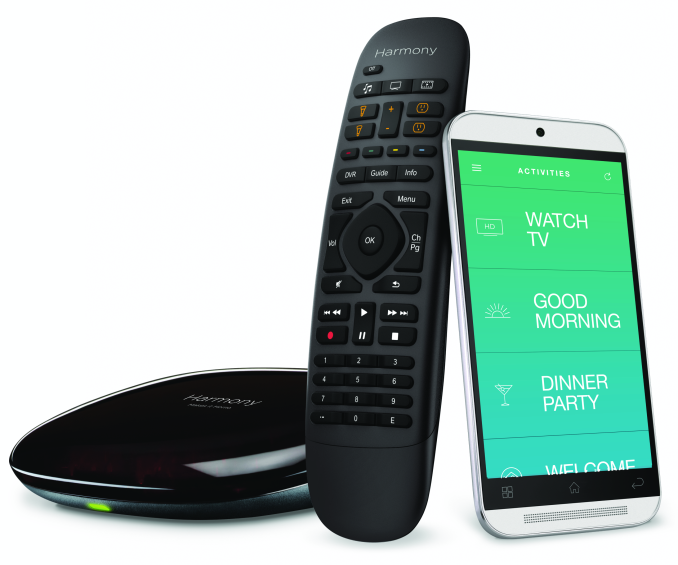 The remote communicates via RF, enabling the hub to be placed in a closed cabinet (if necessary). The mobile apps are obviously compatible with the hub even when the physical remote is being used. This configuration can control any number of home automation devices, but only up to eight entertainment devices.

The highest end configuration is the Logitech Harmony Ultimate Home. It is quite similar to the Harmony Home Control, except for a few updates to the remote control itself: a 2.4" clour touchscreen, gesture control and additional programmability. 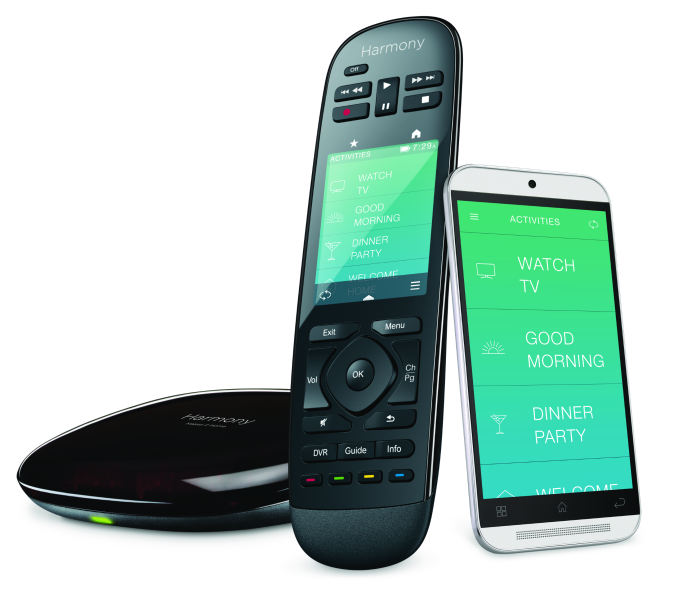 The kit including the hub and the touchscreen remote will retail for $350. This configuration can control up to fifteen entertainment devices and virtually unlimited number of home automation devices.

In addition to the above three configurations (which will be available for purchase this month), Logitech will also be introducing the Logitech Harmony Hub Extender in December for $130. This extender will expand compatibility by allowing the hub to talk to devices that communicate using ZigBee or Z-Wave. Logitech also stressed the fact that the extender will be Thread-compatible.

The Living Home lineup is a welcome addition to the home automation market. However, Logitech faces a few challenges. There are also a few questionable decisions that have been made with respect to the operating details.

1. Entertainment device manufacturers have typically adopted a hands-off approach after selling their wares to the consumers. As such, they don't have any issues sharing methods to control their equipment with Logitech. On the other hand, many of the IoT / home automation device makers treat their customers as recurring revenue sources by adopting subscription models. Some of them also want to tightly control the customer experience within a walled ecosystem. Under these circumstances, it is not clear how willing they would be to share their APIs with Logitech or work to make their products compatible with the Harmony platform. That said, Logitech says more than 6000 home automation devices are currently compatible with the hub, and the number is expected to keep growing.

2. Logitech is not adopting a subscription fee model for the Living Home lineup. While this is excellent news for consumers, it would be interesting to see what keeps the cloud servers for the external control aspect running in the future. It might not be a big deal for a company of Logitech's size, but it leads to another aspect - decentralized control.

3. Based on the initial information provided to us, it looks like the Logitech Living Home lineup requires the hub to be always connected to the Internet for it to control the connected devices. This makes sense for devices that currently offer cloud-based control only. But, we are at a loss to understand why devices that can be controlled via the local network itself (such as, say, the UFO Power Center from Visible Energy and the Ubiquiti mFi mPower strips) need an Internet connection when accessed through the hub while being part of the local network. In our opinion, the control logic (i.e, processing the APIs that talk to the various devices) should be resident on the hub rather than on the cloud.

4. It is not clear whether it is possible for third-party apps to talk to the hubs. Logitech does have a developer program for device makers to make their products compatible with the Harmony home hub. While Logitech indicated that the products being launched today can talk to the recently SmartThings and PEQ hubs, the availability of APIs for the Logitech hub itself remains an open question.

In conclusion, the launch of the Harmony Living Home lineup looks to be just what the home automation market needs. If Logitech can replicate their success with home entertainment control in this space, it solves a very important problem for the consumers and will allow consumers to invest in home automation without the risk of a fragmented experience. A reputable and reliable company had to get serious about this space, and we believe Logitech has the right play here.