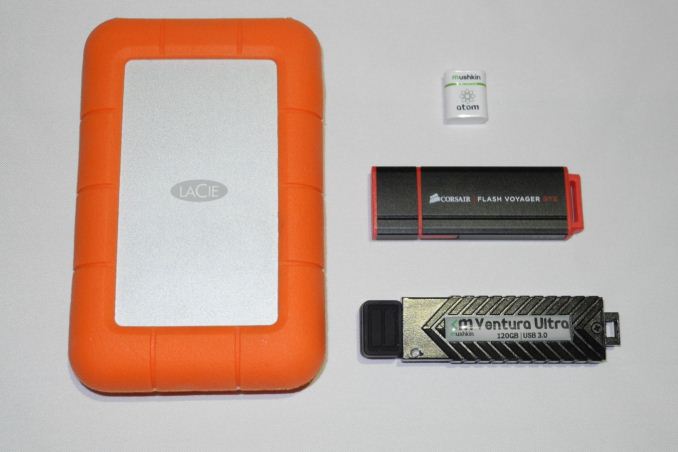 SSD technology has advanced to a stage where it is possible to have flash drives with bona-fide SSD controllers. The addition of a SATA to USB 3.0 bridge provides an ubiquitous high-speed direct attached storage interface. We have already looked at the Phison S9-based Corsair Flash Voyager GTX and the SandForce SF2281-based Mushkin Ventura Ultra. Our review of the Mushkin Ventura Ultra 120GB drive had a comment about the device's thermal throttling issues. This piqued our interest and we set out to see if any of the other units evaluated before had such issues. Obviously, we were also interested in determining whether our Ventura Ultra sample had the problem. In the case of throttling, we also wanted to make our review complete by bringing out the circumstances under which it would trigger. As we will see further down in this piece, our experiments did find evidence of throttling in the Mushkin Ventura Ultra.

Recently, we also received a sample of another SSD controller-based flash drive. Putting that drive through our throttling test revealed even worse results compared to the Mushkin Ventura Ultra. Upon our feedback, the manufacturer is contemplating a firmware update. In this piece, we will refer to the unit as 'BrandX 240GB' (a complete review of the unit with benchmark numbers will be published once the manufacturer provides us a resolution for the throttling issue). The list of DAS units put under the performance consistency scanner is provided below.

Our testing methodology for DAS units takes into consideration the usual use-case for such devices. The most common usage scenario is transfer of large amounts of photos and videos to and from the unit. In order to tackle this, we created three test folders with the following characteristics:

These folders were put in a RAM drive on our testbed. Using robocopy, each folder was copied from the RAM drive to the DAS (write benchmark) and back to the RAM drive (read benchmark). This process was repeated thrice. To check for performance consistency, we instrumented our benchmark script to record the flash drive's read and write transfer rates while the robocopy process took place in the background. For supported drives, we also recorded the internal temperature of the drive during the process.

Aspects that may influence performance consistency include thermal throttling and firmware caps on access rates to avoid overheating or other similar scenarios. This aspect is an important one, as the last thing that users want to see when copying over, say, 100 GB of data to the flash drive, is the transfer rate going to USB 2.0 speeds. The graphs below show the speeds observed during our real-world DAS suite processing with the instrumented benchmark script. The first three sets of writes and reads correspond to the photos suite. A small gap (for the transfer of the videos suite from the primary drive to the RAM drive) is followed by three sets for the next data set. Another small RAM-drive transfer gap is followed by three sets for the Blu-ray folder. 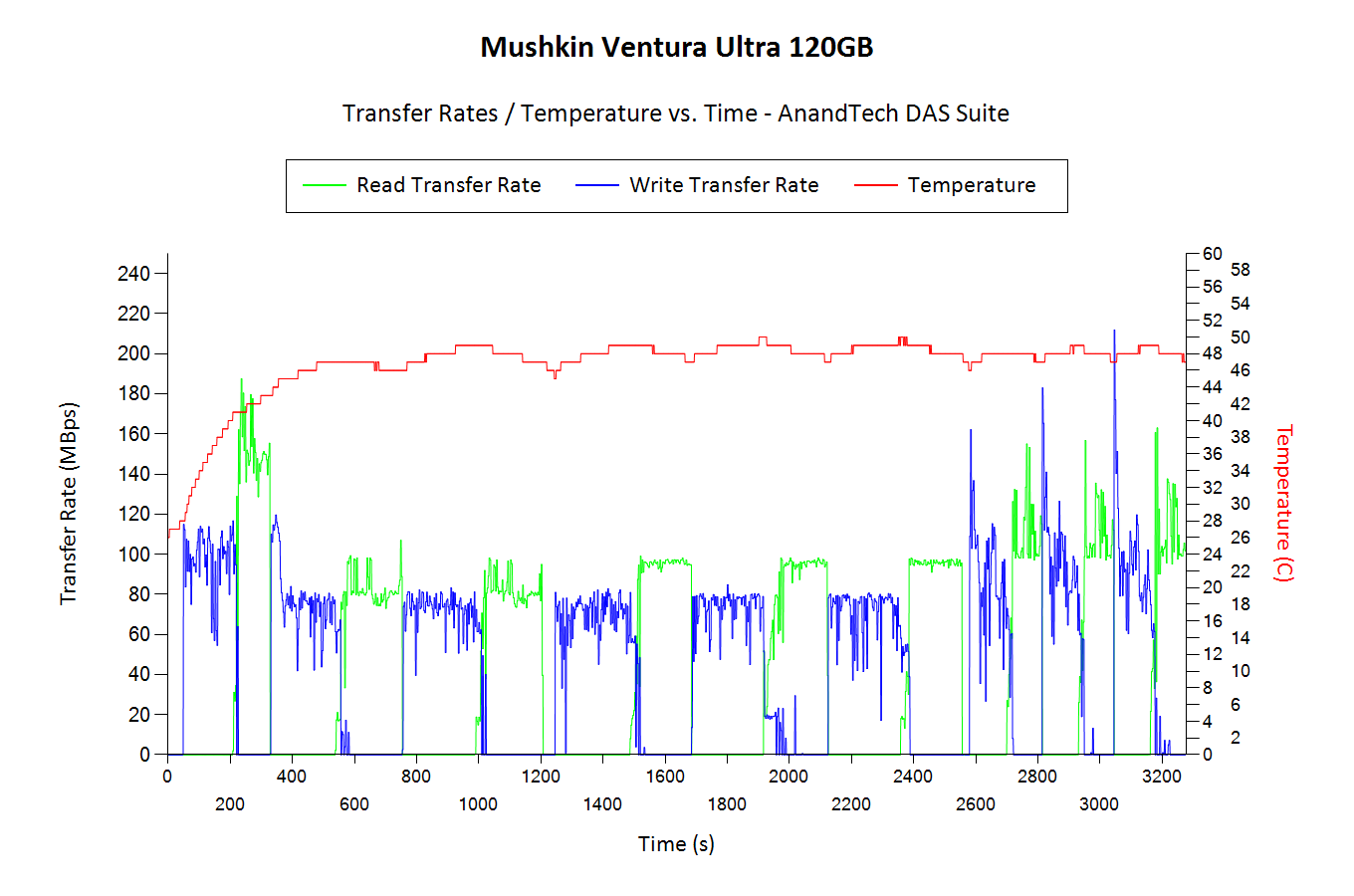 BrandX, though, behaved differently. The temperature in the steady state settled around 53 C. Unfortunately, the throttling (after a similar amount of data transfer as the Mushkin Ventura Ultra) resulted in the write speeds getting capped at a paltry 20 MBps. The reads managed to remain around 80 MBps.

The Mushkin Atom is not meant to take the performance crown, and the advertised write speeds are in the 20 MBps range. Our benchmark run ran at a steady 15 MBps, while the reads didn't get throttled at all in our evaluation process.

The LaCie Rugged Thunderbolt drive is not a flash drive (unlike the other units considered in this piece). It is a bona-fide SSD in a USB 3.0 / Thunderbolt hybrid enclosure. It is no wonder that the transfer rates were hardly affected by the relatively small amount of data traffic. The real winner of our evaluation was the Corsair Voyager GTX. There is no performance degradation even after more than 120 GB of continuous traffic. It must also be remembered that we ran our robocopy benchmark with multiple queue depths in our original review (that was more than 480 GB of continuous traffic) and the table showed remarkable consistency. The instrumented benchmark run confirmed the same.

Coming to the business end of the piece, it must be remembered that the capabilities must be compared keeping the price in mind. If cost is not an issue and the form factor is not an issue, the LaCie Rugged Thunderbolt is the hands down winner for a fast portable DAS unit with consistent performance. If cost is the primary concern, and one doesn't mind a little bit of throttling after around 18 GB of continuous write traffic, the Mushkin Ventura Ultra is a great choice at less than $0.6/GB. The middle ground (right balance of cost and fast, consistent performance, along with a traditional flash drive form factor) is held by the Corsair Voyager GTX. At more than $0.85/GB, it also serves as a reminder that one gets what they pay for.