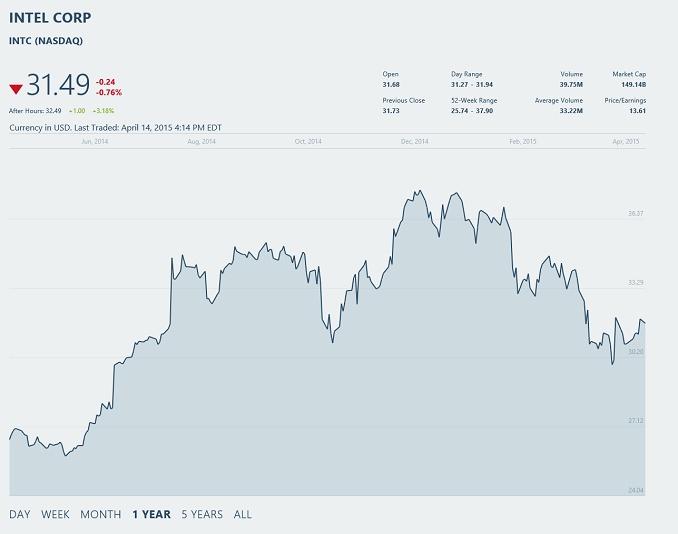 There are a couple of notes to make about this year’s reporting structure. Last November it was made known that the Mobile division would merge with the PC Division. The Mobile division has long been a source of large operating losses mostly due to the contra revenue plan to boost Atom sales in tablets. It also should mean that mobile becomes as big of a priority for Intel as the PC CPU space, which should benefit the company in the long term with the push to lower power devices. For Q1 2015, Intel is no longer reporting the Mobile division as a separate reporting structure, and instead it will be combined into the Client Computing Group.

The new numbers will of course reflect this, so any year-over-year comparisons will also be compared with like-for-like data.

That being said, the Client Computing Group did not have an excellent quarter. Declining PC sales due to the slowing of corporate customers performing Windows 7 migrations has put a damper on this group. Revenue for the group was $7.4 billion, which is down 16% from last quarter, and down 8% from last year. Breaking the numbers down a bit further, desktop platform volumes were down 16% year-over-year, which is a pretty sharp decline. At the same time, the average selling price for desktop platforms went up 2% to help offset this loss. Notebook platforms on the other hand were up 3% year-over-year, but the average selling prices of notebook platforms went down 3%. Tablet volumes were up 45% as compared to Q1 2014. Compared to Q4 2014, the entire group had revenue down 16%, platform volumes down 18%, and average selling prices up 1%.

The Internet of Things group is still relatively small at Intel, but posted an 11% year-over-year growth with revenues now coming in at $533 million. This is a 10% drop as compared to Q4 2014.

Software and Services is roughly the same size of overall business as IoT, with revenues at $534 million, which was down 3% year-over-year and 4% quarter-over-quarter.

The “All Other” segment which includes non-volatile memory (NAND flash memory), SoCs for wearables and emerging computing, and corporate expenses had revenues of $615 million, up 13% year-over-year and flat quarter-over-quarter. 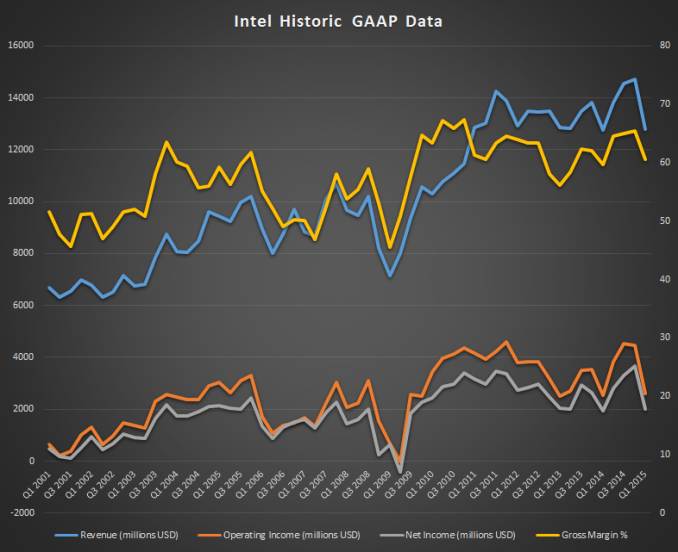 In Q2 we should start to see the new Atom chips come to market, and devices like the Surface 3 have already been confirmed to be running the latest 14 nm Atom chip. Also, there should be some talk of Skylake, which is the next Intel Core architecture, although details may be scarce until Q3.

On the financial side, Intel is forecasting revenue of $13.2 billion plus or minus $500 million for Q2, with a Gross Margin of 62%. For the full year, Intel is expecting revenue to remain flat.