The new 5.5" form-factor places the Mate S along-side other similarly sized devices such as LG's G4. This new form factor is a bit of a departure from previous designs for Huawei. The company has never offered a 5.5” phone before, their previous large format phone being the 6” Mate 7. This makes the Mate S more of a derivative of the Mate 7 than a successor, if not a new product category entirely.

Starting off, let's start with the spec sheet of the device:

The Mate S ships with HiSilicon's Kirin 935 SoC at the heart of the device. We have already taken a look at the Kirin in our review of the P8 a few months ago and found that the chipset exhibited some worrisome power consumption characteristics that lead to some reduced battery life. We had hoped HiSilicon would have been able to ship its next-generation SoC, the Kirin 950, in Huawei's fall flagship but I've been told that the chipset isn't ready till 2016 and likely will only find itself in Huawei's next spring lineup.

On the network side, we see that the Mate S supports a very wide range of frequency bands which should allow the western variant of the phone to function on most carrier networks. Still connectivity related, I was disappointed to see that Huawei yet again fell back to Broadcom's aging BCM4334 WiFi chipset. Also similar to the P8, the Mate 2 doesn't come with support for 5GHz WiFi, a very concerning characteristic for a device of this price. 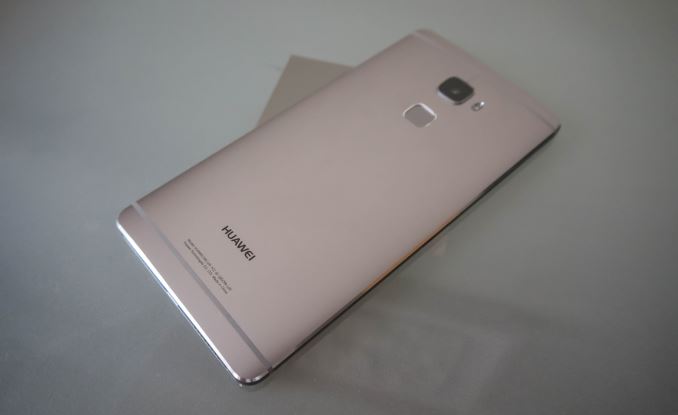 On the camera side, the Mate 2 directly adopts the camera system from the P8. This means a Sony IMX278 13MP RGBW sensor with OIS and an IMX178 8MP front-facing shooter. The camera uses a high-performing external ISP for advanced image processing. A new addition is a soft LED torch on the front of the phone specifically design for selfies.

Design-wise the back of the Mate S looks extremely similar to the Mate 7; it would be hard to distinguish them straight-on if it weren't for their size difference. There is however one big change in the design of the phone: the back curvature. Together with the rounded bezels of the 2.5D screen, this results in the edges of the Mate S being extremely thin, far less than the 7.1mm maximum thickness at the centre of the device. Both of these design features make the Mate S one of the most comfortable devices I've used to date.

The Mate S also improves on previous Mate products in terms of build-quality. The aluminium of the full-metal body comes with a finer grain than what was found on the P8, yet still seems grippier than the Mate 7's finish. The new 2.5D glass front is also surrounded by a much higher-quality material, which I'm not sure if it's metal or a glass extension. The Mate 7 here featured a little plastic rim that could be easily chipped when dropped.

I was extremely surprised when I unpacked my unit as I came to the realization that the device comes with an AMOLED screen. This wasn't specified in the launch presentation and something that I overlooked in the bright lights of the demo unit stands. A quick dig through the device's drivers revealed that Huawei is using one of Samsung Display's higher-end DDICs. The screen also managed to get extremely bright, not unlike the Galaxy S6, so we might be looking at one of SDC's latest generation screens.

The 1080p screen is visibly using a diamond-grid pentile pixel matrix, although it's not noticeable until you get close to the screen. The Note 3 is probably the best comparison device here when it comes to the sharpness of the screen. Huawei's colour profile seemed a bit saturated in terms of colour calibration, but I won't be able to tell more until I get to measure it properly for the device's review. 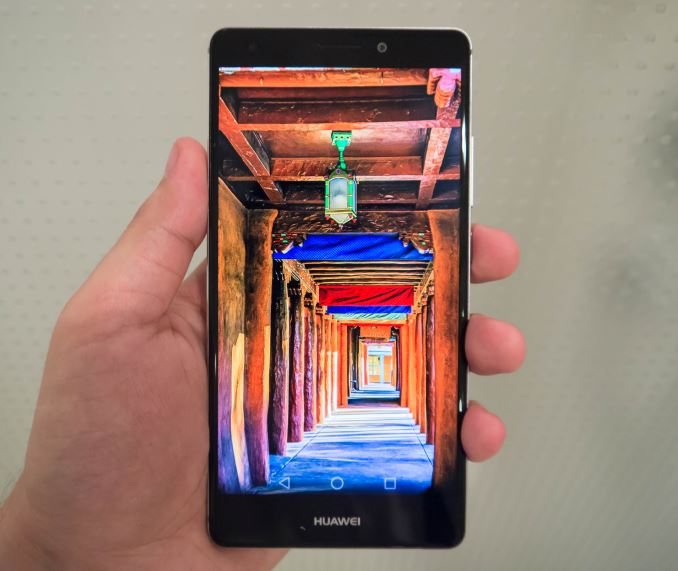 A big feature that was touted during the launch was the reveal of "Force Touch" - a new input method where the screen is able to sense the amount of pressure one applies to touches. Huawei demonstrated a few features such as zooming via touch pressure or being able to use the bezels of the screen as input areas. The device even comes with a scale application that is supposed to be able to approximate an object's weight when you place it on the screen.

The catch however is that the Force Touch feature is limited to the 128GB model which according to Huawei won't be available until next year, and furthermore won't be released in all regions. It seems like the feature is not yet mass-production ready and Huawei is looking for suggestions and ideas on how the feature might could get used - meaning the software and functionality is still in the early stages.

The Mate S comes in Luxurious Gold, Titanium Grey (pictured) and Mystic Champagne colour options in 32GB and 64GB storage options for 649€ and 699€ respectively, and will be available in select markets in the coming weeks and months.