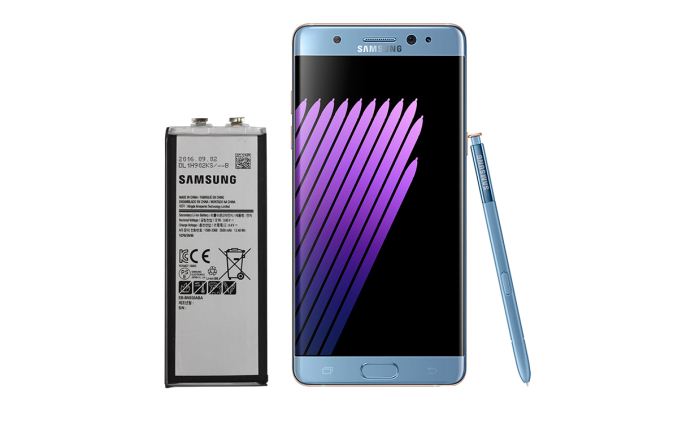 Samsung held a press conference today detailing the results of its investigation into the battery fires that plagued its Galaxy Note7. Reports of phones catching fire appeared soon after it went on sale August 19, 2016. After an initial investigation identified faulty batteries from one of its suppliers as the root cause, later identified by the US Consumer Product Safety Commission as Samsung SDI, Samsung announced a global exchange program on September 2, where phones containing the faulty battery would be replaced by ones using a battery from a second supplier; however, after this new batch of phones continued to catch fire, it became clear that the Note7’s battery problem was more complicated. Without a solution in hand, the company was forced to cease production and suspend sales of the Note7 on October 11. To date, Samsung said 96% of the roughly 3 million phones sold to customers around the world have been recovered.

Over the past several months, Samsung has been working to uncover the root cause of the Note7’s battery fires. The company’s own internal investigation involved over 700 engineers and data gathered from testing 200,000 phones and 30,000 Note7 batteries. To facilitate the testing, Samsung built a large-scale test facility that automated various charging and discharging scenarios that ultimately replicated the failures that occurred in the field. 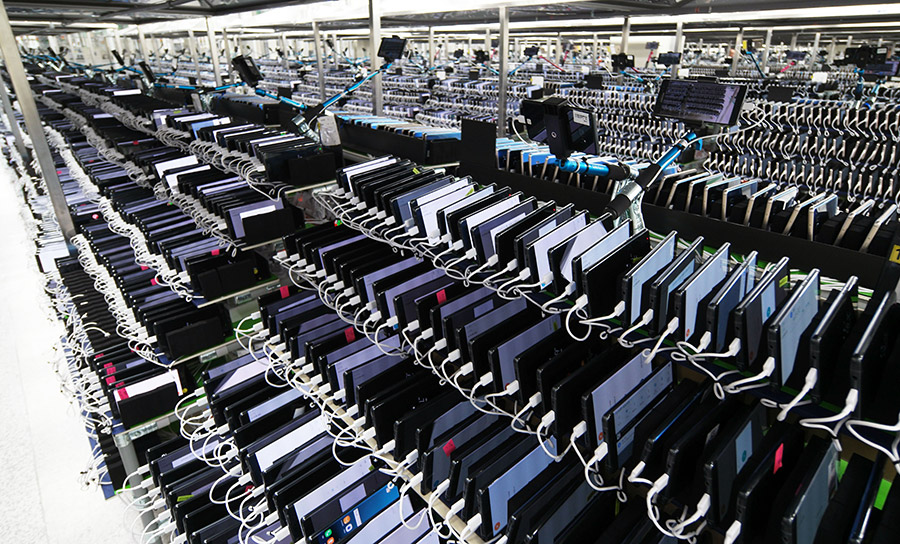 To ensure it found the true cause or causes of the failures, it examined everything from the battery to hardware to software to manufacturing and logistics. Samsung tested both wired and wireless charging over a range of voltages and currents, with the Note7’s rapid charging feature both enabled and disabled. To see if the phone’s IP68 rated environmental protection caused heat buildup inside the sealed chassis, it tested phones with and without the back cover in place. It even checked to see if the Note7’s iris scanning feature or running certain preloaded and third-party apps resulted in excessive battery current.

In addition to its own internal testing, Samsung also enlisted the aid of two independent testing labs—Exponent Engineering and Scientific Consulting and UL—for battery and electronics testing and hired TÜV Rheinland to investigate possible causes due to logistics and assembly. 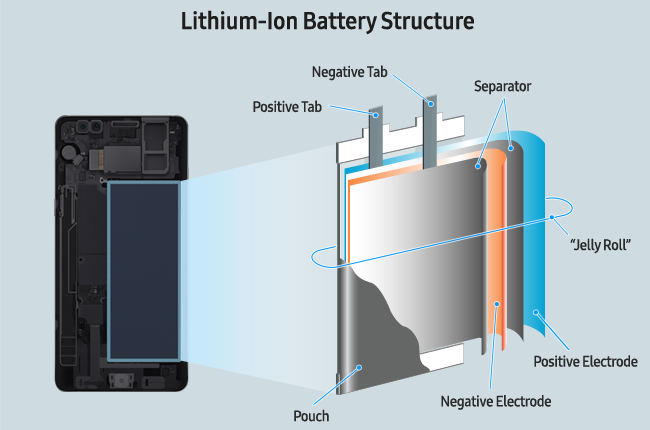 Ultimately, these investigations revealed that the Note7 fires were caused by different design and manufacturing defects in the batteries from both suppliers. The lithium-ion batteries used in the Note7 were constructed from long strips of an insulating separator sandwiched between positive and negative electrode foils spirally wound to create an electrode assembly inside a heat-sealed polymer pouch. Electrode tabs were welded to the positive and negative foil electrodes for external connection points.

For the batteries from Samsung SDI (referred to as “Company A”), the polymer pouch did not provide enough room for the negative electrodes in the upper-right corner closest to the negative tab. Either through normal expansion and contraction of the battery while charging/discharging, or through damage caused during manufacturing or assembly (as discovered by UL), the negative electrodes were bent after contacting the pouch corner, stretching the separator. If the separator failed, the cell would short circuit, which could lead to a runaway thermal failure. UL also discovered that the separator was too thin in some samples, which would increase the likelihood of this type of failure. 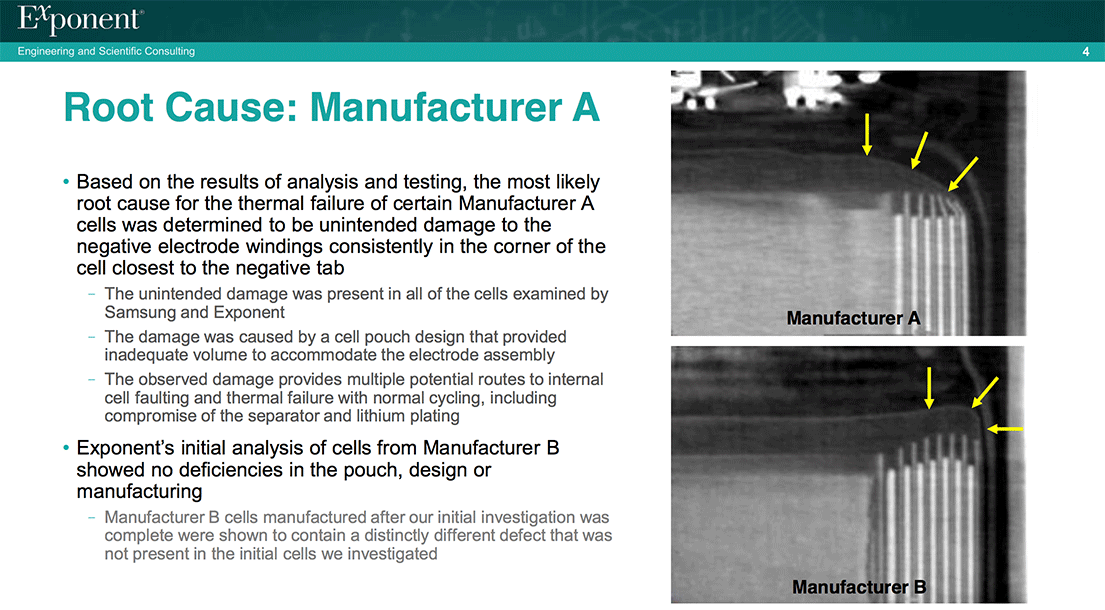 The pouch design of the batteries supplied by “Company B” (Amperex Technology), which were used in the Note7 replacements, had sufficient clearance around the electrodes. The failure of these batteries was instead due to poor control of the ultrasonic welding process used to attach the positive tab to the positive electrode. This spot welding process created sharp protrusions that could bridge the gap between the positive tab and the neighboring negative electrode during normal expansion and contraction of the battery due to thermal cycling, causing an electrical short. Some samples were also found to be missing a layer of protective insulation tape under the positive tab (the separator material was still in place), increasing the likelihood of a short circuit. 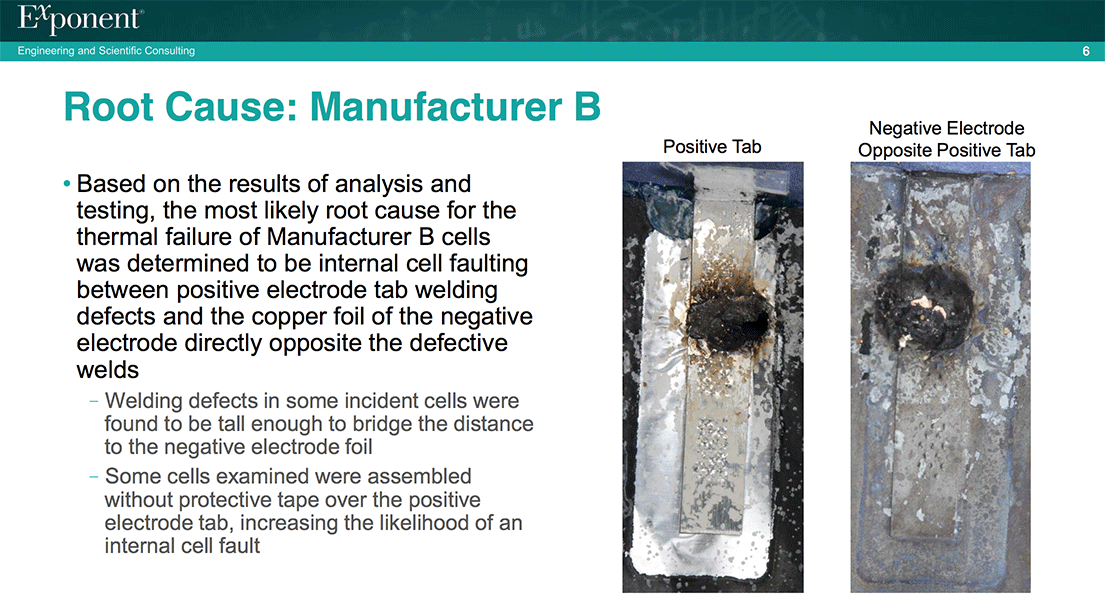 For batteries from both companies, the use of high-energy density cells increased the risk for thermal runaway during a short circuit, especially when the battery was in a high state of charge.

UL and Exponent also tested the Note7’s internal charging circuitry along with external charging accessories, including Samsung’s charger and popular third-party chargers. UL found that the Note7’s battery temperature and maximum current drain did not exceed rated limits and that battery current, voltage, and temperature did not exceed the battery’s specifications when charging with Samsung’s included charger. Exponent also found the Note7’s internal battery protection circuitry capable of defending it against chargers operating outside specifications. Based on their investigation, the companies concluded that the Note7’s electronics did not contribute to failures of either manufacturer's batteries. 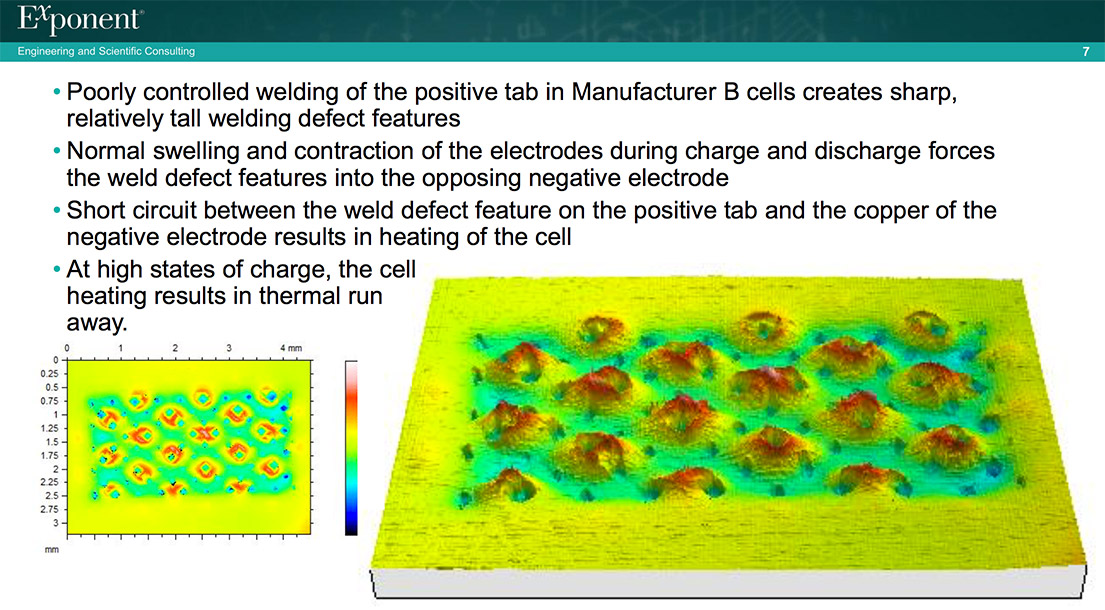 To reduce the likelihood of future battery failures, Samsung is implementing an 8-point Battery Safety Check that involves additional inspection and testing, and improving training for everyone involved in handling batteries, both during assembly and shipping. It’s also adding more space and brackets around the battery to protect it from crush related failures, improving the safety standards for the materials inside the battery, and improving its software algorithms that control the battery charging temperature, current, and duration. Samsung confirmed that the upcoming Galaxy S8 will benefit from these new procedures and features, noting that they will not significantly impact the S8’s release date, which will occur sometime after Mobile World Congress this year. 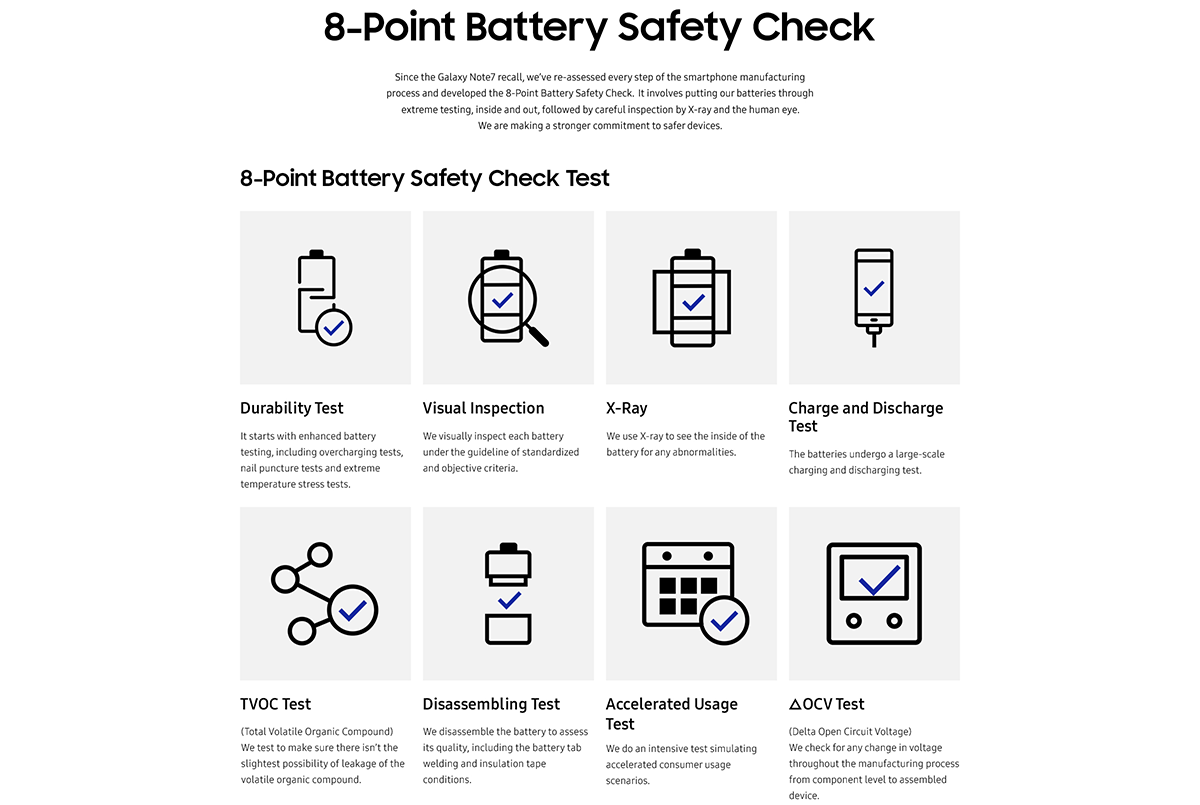 Samsung is eager to move past the Galaxy Note7 and begin the process of regaining consumer trust, which is one reason why it’s sharing the results of its investigation. In a further bid to improve battery safety throughout the industry and repair its reputation, Samsung said it will share its new 8-point inspection plan with global standards organizations.