When decent, somewhat affordable, client focused solid state drives first came on the scene in 2008 the technology was magical. I called the original X25-M the best upgrade you could do for your system (admittedly I threw in the caveat that I’d like to see > 100GB and at a better price than $600). Although NAND and SSD pricing have both matured handsomely over time, there’s still the fact that mechanical storage is an order of magnitude cheaper.

The solution I’ve always advocated was a manual combination of SSD and HDD technologies. Buy a big enough SSD to house your OS, applications and maybe even a game or two, and put everything else on a RAID-1 array of hard drives. This approach works quite well in a desktop, but you have to be ok with manually managing where your files go.

I was always curious about how OEMs would handle this problem, since educating the masses on having to only put large, infrequently used files on one drive with everything else on another didn’t seem like a good idea. With its 6-series chipsets Intel introduced its Smart Response Technology, along with a special 20GB SLC SSD designed to act as a cache for a single hard drive or a bunch in an array. 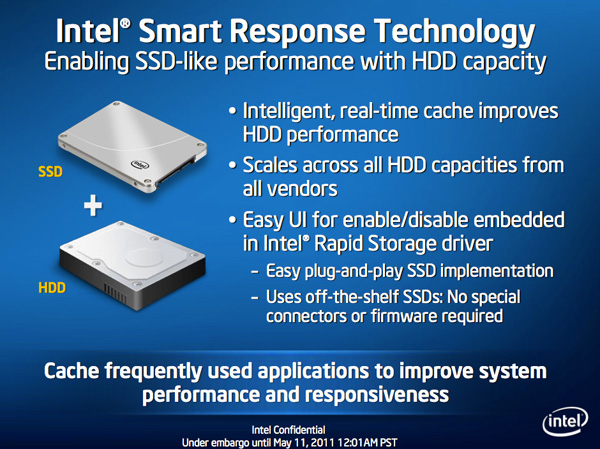 Since then we’ve seen other SSD caching solutions come forward that didn’t have Intel’s chipset requirements. However most of these solutions were paired with really cheap, really small and really bad mSATA SSDs. More recently, OEMs have been partnering with SSD caching vendors to barely meet the minimum requirements for Ultrabook certification. In general, the experience is pretty bad.

Hard drive makers are working on the same problem, but are trying to fix it by adding a (very) small amount of NAND onto their mechanical drives. Once again this usually results in a faster hard drive experience, rather than an approximation of the SSD experience.

Typically this is the way to deal with hiding latency the lower you get in the memory hierarchy. Toss a small amount of faster memory between two levels and call it a day. Unlike adding a level 3 cache to a CPU however, NAND storage devices already exist in sizes large enough to house all of your data. It’s the equivalent of having to stick with an 8MB L3 cache when for a few hundred dollars more you could have 16GB. Once you’ve tasted the latter, the former seems like a pointless compromise.

Apple was among the first OEMs to realize the futility of the tradeoff. All of its mainstream mobile devices are NAND-only (iPhone, iPad and MacBook Air). More recently, Apple started migrating even its professional notebooks over to an SSD-only setup (MacBook Pro with Retina Display). Apple does have the luxury of not competing at lower price points for its Macs, which definitely makes dropping hard drives an easier thing to accomplish. Even so, out of the 6 distinct Macs that Apple ships today (MBA, rMBP, MBP, Mac mini, iMac and Mac Pro), only two of them ship without any hard drive option by default. The rest come with good old fashioned mechanical storage.

Moving something like the iMac to a solid state configuration is a bit tougher to pull off. While notebook users (especially anyone using an ultraportable) are already used to not having multiple terabytes of storage at their disposal, someone replacing a desktop isn’t necessarily well suited for the same. 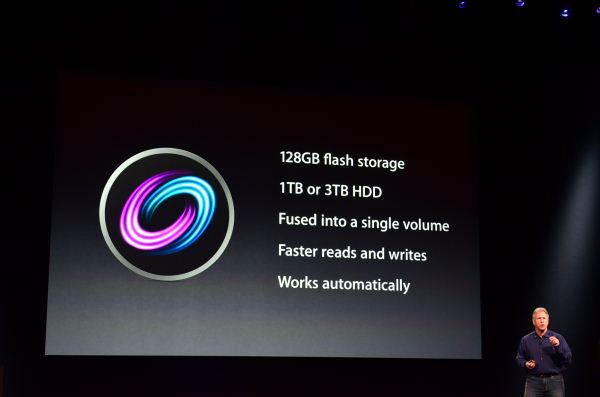 Apple’s solution to the problem is, at a high level, no different than all of the PC OEMs who have tried hybrid SSD/HDD solutions in the past. The difference is in the size of the SSD component of the solution, and the software layer.