The first interesting comparison in the table below is between the My Book with the 5400 RPM HelioSeal drive and the G-Technology G-Drive with Thunderbolt over USB 3.0 that employs a 7200 RPM HelioSeal drive. While the 1 MB sequential access traces show the 7200 RPM drive in better light, the use of a bridge chip supporting UASP helps the 5400 RPM My Book pull ahead by a huge margin in the high queue-depth sequential access trace.

The test starts off with the Photos folder in a RAM drive in the testbed. robocopy is used with default arguments to mirror it onto the storage drive under test. The content on the RAM drive is then deleted. robocopy is again used to transfer the content, but, from the storage drive under test to the RAM drive. The first segment gives the write speed, while the second one gives the read speed for the storage device. The segments end with the purge of the contents from the storage device. This process is repeated thrice and the average of all the runs is recorded as the performance number. The same procedure is adopted for the Videos and the BR folders.

The performance numbers show that the My Passport 4TB performs better than the LaCie Porsche Design Mobile Drive 4TB for reads, while the situation is reversed for writes (which is similar to the behavior we encountered in the CrystalDiskMark traces). The G-Technology G-Drive with Thunderbolt 8TB betters the My Book 8TB consistently even over the former's non-UASP USB 3.0 interface. The Seagate Innov8 is nowhere in the picture because of the Archive HDD inside, but its use-case (bus-powered high-capacity DAS) is quite different compared to the My Book. Readers interested in looking at all the graphs in one shot can choose the 'Expand All' option in the dropdown menu. 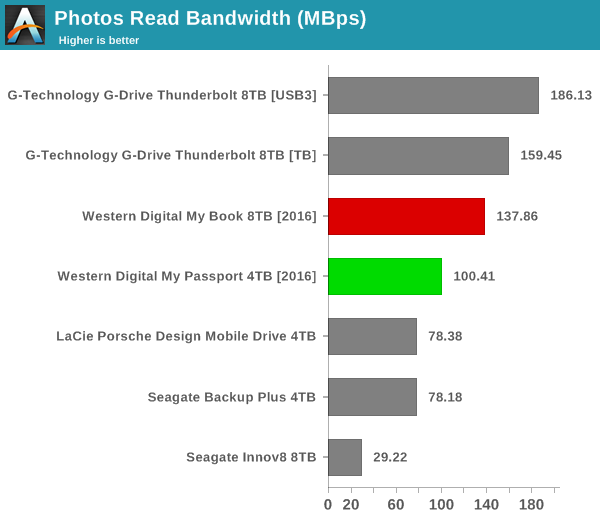 Usually, PC Mark 8 reports time to complete the trace, but the detailed log report has the read and write bandwidth figures which we present in our performance tables. Note that the bandwidth number reported in the results don't involve idle time compression. Results might appear low, but that is part of the workload characteristic. Note that the same CPU is being used for all configurations. Therefore, comparing the numbers for each trace should be possible across different DAS units. The general trend we observed in the robocopy benchmarks is seen here also. Readers interested in looking at all the graphs in one shot can choose the 'Expand All' option in the dropdown menu below. 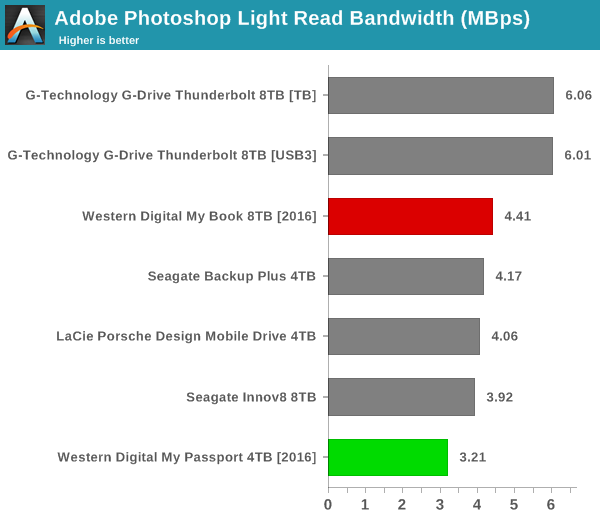