Xiaomi Mi MIX: A Closer Look at the Design and Display

The Mi MIX’s most prominent feature is its 6.4-inch IPS LCD display. In addition to its larger than average size, this display deviates from the usual 1920x1080 16:9 aspect ratio. Similar to what LG and Samsung have done with their G6 and S8 displays, Xiaomi has stretched the MIX’s display vertically, giving it a 17:9 aspect ratio and a 2040x1080 resolution with a sharp 360ppi pixel density. The extra 120 pixels added to the height are used for the onscreen controls, leaving a standard 16:9 window for content.

Xiaomi’s MIUI offers several different display options that affect white point, gamma, color gamut, and accuracy. For starters, there are three different color settings that are self explanatory: Standard (the default), Warm, and Cool. There are also three different options to control the display’s contrast. The default “Automatic contrast” mode claims to automatically “optimize contrast for available light.” The two other modes, “Increased contrast” and “Standard” (which leaves contrast constant), are not available when using the Warm and Cool color settings.

Chinese OEMs, including Xiaomi, have traditionally struggled with display calibration. Unbalanced RGB settings that result in poor grayscale performance and blue-tinted screens and wide-gamut panels or color compression that produce oversaturated colors are common issues. To see if the Mi MIX suffers from similar problems, we’ll use an X-Rite i1Pro 2 spectrophotometer for color measurements and an i1Display Pro colorimeter for luminance measurements, profiling it with SpectraCal's CalMAN software. 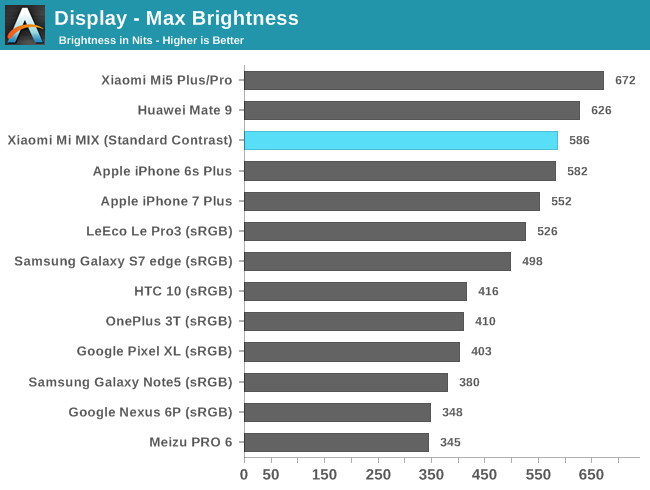 The Mi MIX gets plenty bright at 586 nits, falling just below the Mate 9 and the iPhone 7 Plus, which reaches up to 618 nits when using its auto-brightness boost (the value in the chart above is for manual mode). The MIX does not have a brightness overdrive feature when using auto-brightness, but its outdoor visibility is still very good. At its lowest setting, the MIX’s brightness drops to a mere 1 nit, which makes it usable even in a pitch-black room. 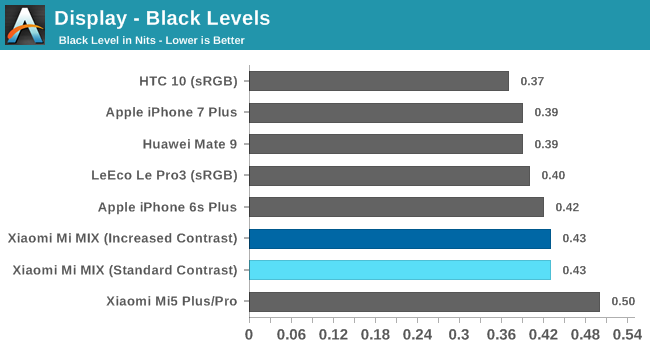 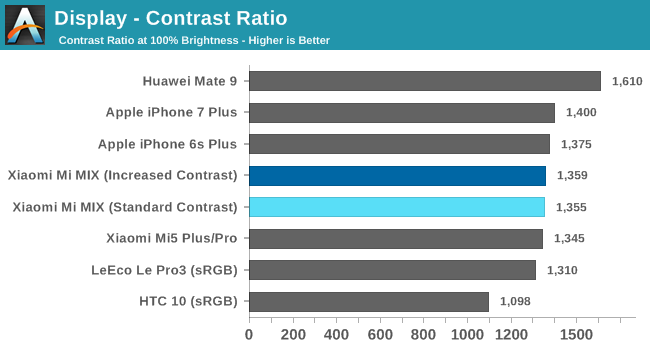 Black level and contrast ratio are measured at maximum brightness, which makes direct black level comparisons more difficult because a display’s black level increases with brightness; however, after normalizing for this effect, the Mi MIX still achieves a very good black level for an IPS display, falling just behind the Mate 9 and LG G5. Its black levels are on par with the iPhone 7 Plus and Xiaomi Mi5 and a little better than the HTC 10 at the same brightness level.

The phones with OLED panels are not shown in these charts because they are able to achieve a black level of zero and a mathematically infinite contrast ratio by being able to completely turn off individual pixels. 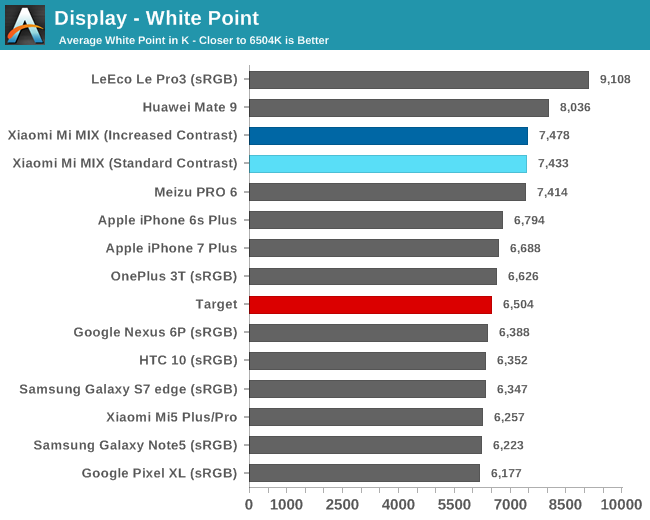 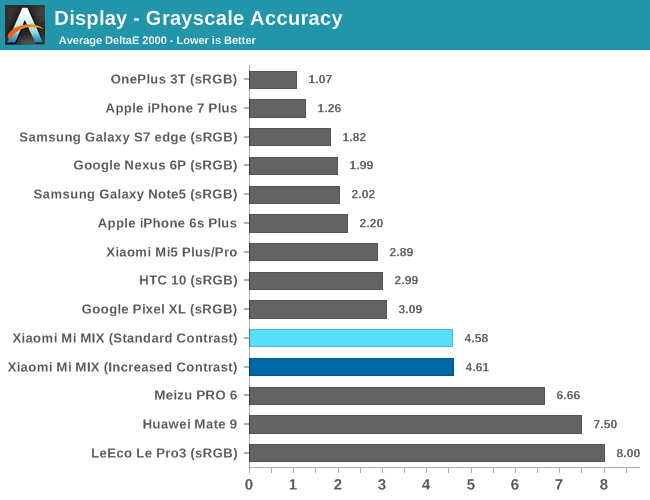 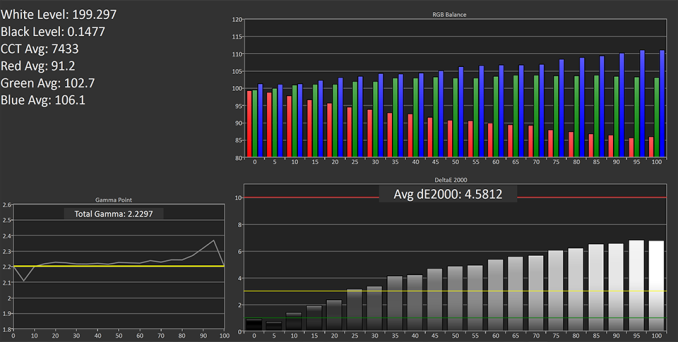 When using the Standard color setting, the MIX’s display takes on a slight blue tint. Its roughly 7,400K average white point is certainly cool, but not nearly as extreme as Huawei’s phones, including the Mate 9 and Honor 8, or other Chinese OEMs or even LG’s flagships. The Cool color setting is a bit more extreme, increasing the average white point to 8,249K by boosting the green and blue primaries at the expense of red. This gives the screen a very noticeable aqua-colored tint. The only other color mode, Warm, comes very close to hitting the D65 target white point by turning down the blue output, but there’s still an imbalance between the green and red primaries that gives the screen a bit of a green cast.

The Standard and Increased contrast modes have a well-calibrated gamma curve. Things get more interesting when using the Automatic contrast setting with the Standard, Cool, and Warm color modes (Automatic contrast is the only available option when using the Cool or Warm color modes). In an effort to improve screen viewability in different lighting conditions, the MIX dynamically adjusts the gamma curve, improving black levels or emphasizing highlights as necessary, which is not the same thing as Content Adaptive Backlight Control (CABC) that actually adjusts brightness by varying the backlight intensity.

You can see in the charts above how the MIX modified the gamma curve to improve the screen’s black level based on the ambient light during the test (a mixture of ambient daylight and incandescent bulbs). In direct sunlight, the gamma curve looks very different, with gamma dramatically reduced below 50% luminance to brighten darker areas of the screen, making more detail visible that would otherwise be overpowered by the ambient light. In such extreme conditions, being able to see what’s on the screen is far more important than accuracy, and this feature does help in these scenarios. 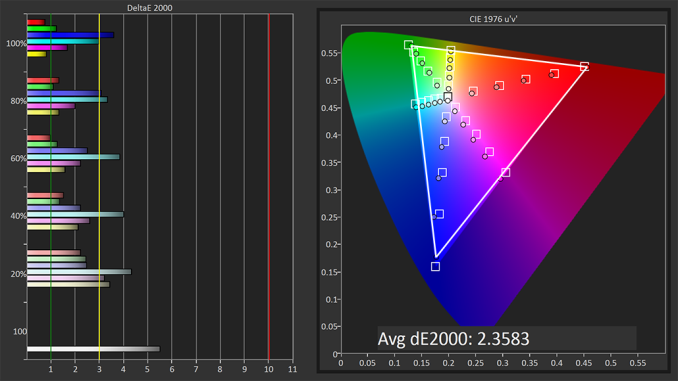 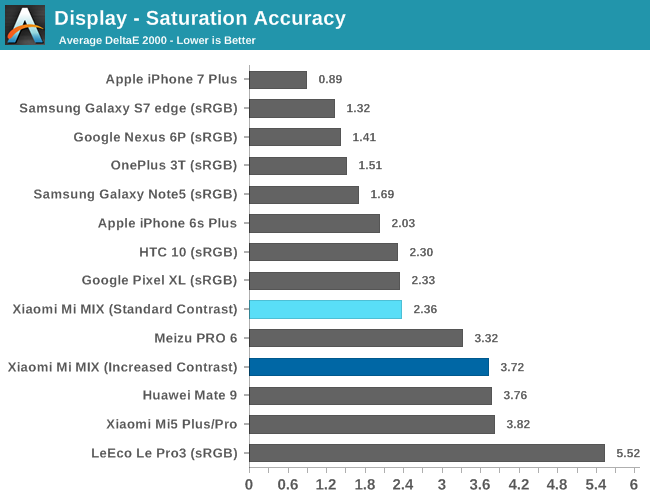 The MIX comes with a wide color gamut panel that covers the DCI-P3 color space, which extends coverage for the red and green primaries beyond sRGB (shown by the inner triangle in the graphs above). This leads to oversaturated colors—particularly blues, magentas, and reds—because of Android’s lack of color management. People who prefer more vivid colors will not be disappointed here. If you prefer a more accurate portrayal of color, you will not be disappointed either. The MIX’s Standard contrast mode is actually an sRGB mode in disguise. It comes up a little short for pure blue, and the cool white point shifts color hues slightly (particularly the magenta and cyan secondaries), but overall this mode keeps ΔE2000 saturation error below the acceptable threshold of 3 with the exception of cyan.

Both the Cool and Warm color modes target DCI-P3 too, but exhibit greater saturation error as a result of hue shifts caused by the RGB imbalances shown in the grayscale graphs above. 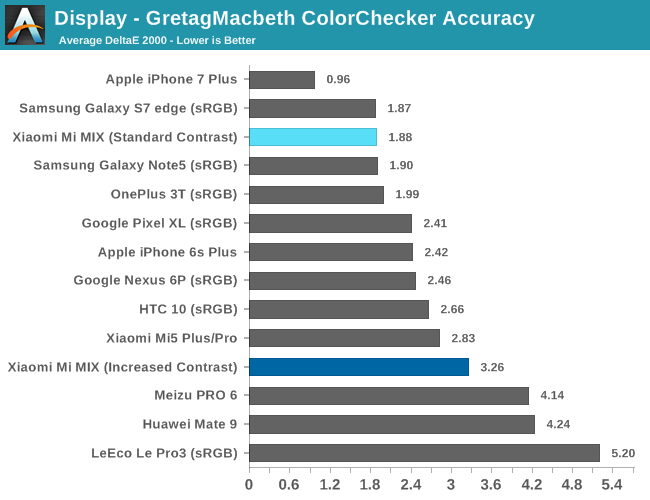 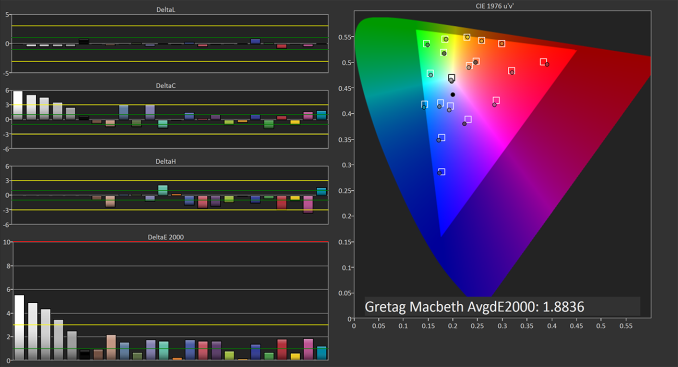 When using the Standard contrast (sRGB) mode, the Mi MIX displays colors very accurately, rivaling even Samsung’s current offerings. All of the tested colors have a ΔE2000 error below 3 (the yellow line above which error becomes noticeable to the untrained eye) and shades of green, yellow, and orange have an error below 1 (the green line below which error is basically imperceptible).

Using any of the other modes, which target a wider color space than sRGB, predictably results in greater error due to oversaturation. Note that the color error will vary slightly for the Cool and Warm color modes, along with the Standard mode with Automatic contrast, based on ambient lighting because of dynamic changes to the gamma curve. The results above should be pretty close, however, because most of the color error arises from oversaturation and hue shift caused by RGB imbalance.

The Mi MIX’s visual and functional appeal both hinge on the performance of its 6.4-inch edge-to-edge display. It’s a risky move, but fortunately it delivers. The high-quality panel has good viewing angles with no backlight bleed. There’s some IPS glow when viewing off center, but it’s not as bad as what we’ve seen from other displays we’ve tested recently. Xiaomi’s combination of color settings and display modes should satisfy most everyone; the wide-gamut modes deliver rich-looking colors while still keeping intermediate color blends looking fairly natural. It’s also great to see a reasonably well-calibrated sRGB mode for people who prefer greater accuracy.

This is a really great display overall. The only area where the MIX falls a little short is white balance, which is a little cool by default. It’s not nearly as bad as what we’ve seen on other Chinese phones, though, and it probably will not bother most people. Xiaomi provides the Cool and Warm color modes to shift the white point, but it would be nice to see finer grained controls.