Now we get to the heart of the GT83VR Titan. NVIDIA’s latest mobile graphics card, the GTX 1080, is arguably the replacement for the mobile version of the GTX 980, rather than the GTX 980M which was available for much longer, and more popular, but regardless, the performance jump from the GTX 980M to the GTX 1080 is huge. We don’t often get to see a jump of this magnitude, but over the last several years NVIDIA has been making their mobile (ie laptop) parts much closer to the desktop counterparts, and with the Pascal launch, they are very close.

Putting one of these in a laptop is not a small undertaking though. The GTX 1080 has a higher TDP than the GTX 980M, so cooling is an even larger concern. On a large system like the GT83VR Titan, it is certainly possible though, and MSI has been offering this model with the previous GTX 980 (non M) in SLI previously, so they have experience cooling this down. 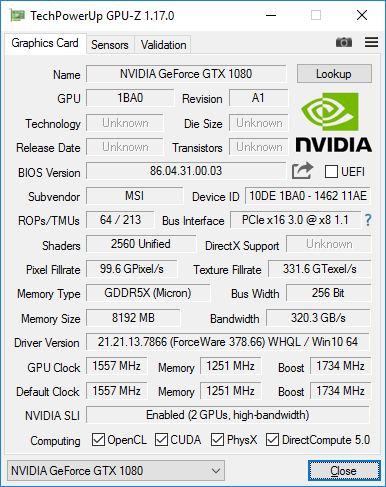 The MSI GT83VR Titan was run through our gaming workloads, which include some synthetic tests, as well as some real games. As with the CPU portion, you can compare the GT83VR Titan against anything we’ve tested in our Notebook Bench. 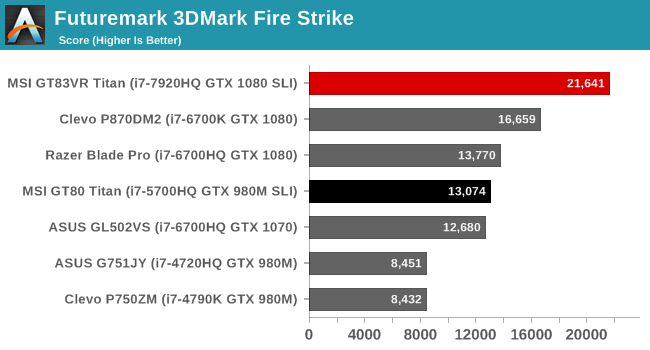 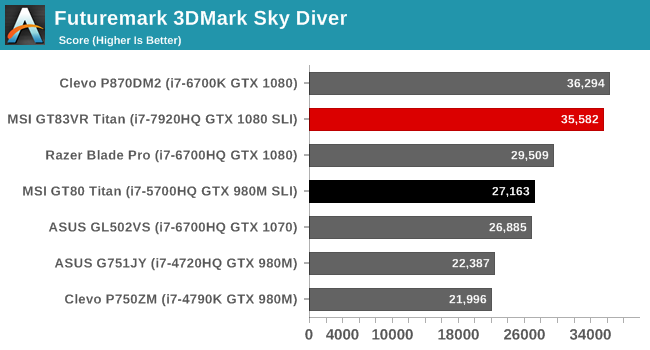 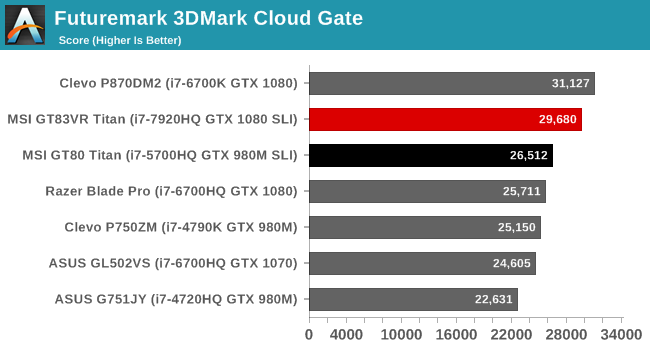 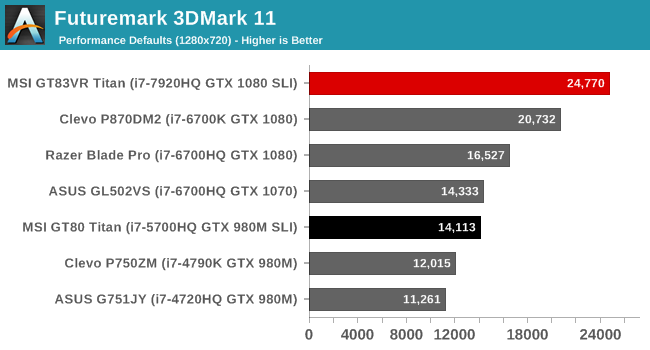 FutureMark’s 3DMark has several tests, of varying complexity. They’ve been updating this test for several years now, and adding new tests for 4K and DX12 as well, so we’ll be adding those in over time once we get some more data.

As for the GT83VR Titan, it is certainly somewhat CPU limited compared to the Clevo P870DM2 with it’s desktop CPU, but on the Fire Strike test, which is the most demanding on the GPU, the SLI GTX 1080s add quite a bit to the result. 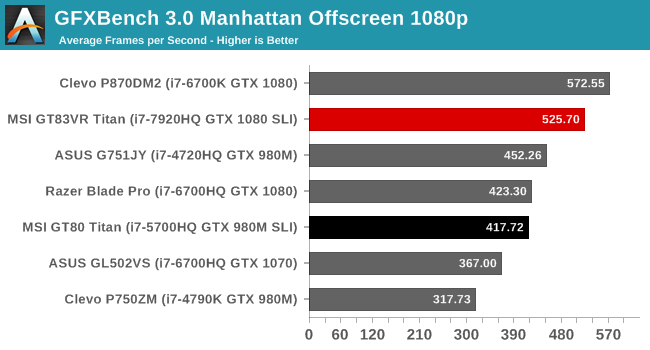 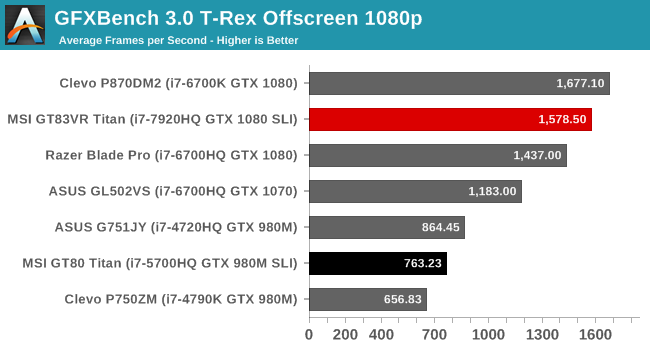 Another synthetic, GFXBench has also been updated with newer tests, and those will be added over time as the data fills in, but we do have the two older tests of Manhattan and T-Rex. Since these are mobile first tests, desktop GPUs tend to be a bit ridiculous with them, and that’s the case here as well, unsurprisingly. 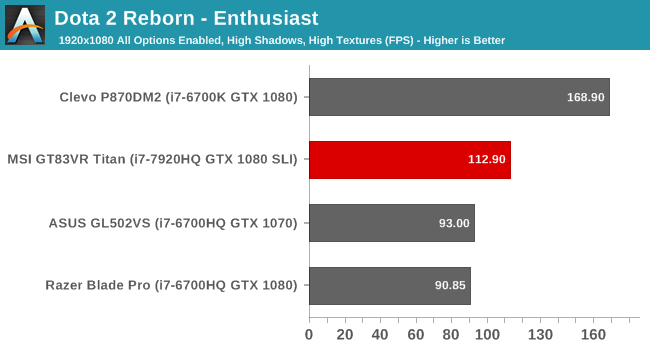 Valve’s Dota 2 is a very popular online arena battle game, and with a decent GPU it very quickly becomes CPU bound. Even on maximum settings at 1080p, the MSI GT83VR Titan is well over 100 frames per second, but it can’t compete here with a single GTX 1080 and a desktop CPU. Bumping the resolution up would likely even this out, but the GT83VR Titan is limited to a 1080p display. 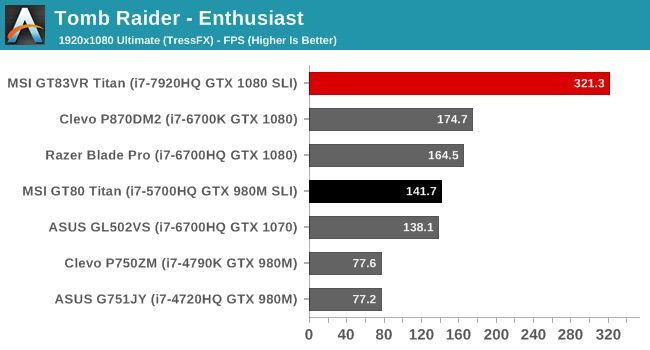 Tomb Raider was a very demanding game, all the way up until the GTX 980M was replaced. Pascal based cards have no issues with this game at 1080p, with even the GTX 1070 at almost 140 frames per second, but as we saw with the original GT80 Titan, SLI works very well on this game, with ridiculous performance. Once again, the system is held back by the display resolution.

Rise of the Tomb Raider

The latest version of Tomb Raider is much more demanding, and at 1080p Ultra, requires more than 4 GB of vRAM or the game will crash. It’s also ported to use DX12. The GT83VR Titan almost exactly matches the FPS that the original GT80 Titan got on the original Tomb Raider, which is interesting, but regardless, it has no issues with this game at the native resolution of the display.

The latest turn based strategy game in the Civilization series continues its tradition of being very CPU bound, but with everything maxed out, it can also put some strain on the GPU. The MSI GT83VR Titan just barely manages 60 FPS on this title, squeaking past the single GPU Clevo. 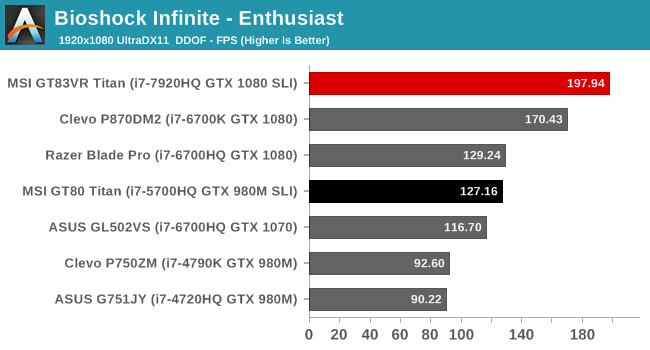 Although this game is getting a bit long in the tooth, it’s only with the Pascal launch that it became a walk in the park for laptop GPUs. It’s still great to keep around though because of the amount of systems that have been tested on it, just to see how things have changed over time. Unsurprisingly the MSI GT83VR Titan does very well in this game, and the SLI helps it surpass the Clevo again meaning we’re not yet at the point where we are CPU limited yet. 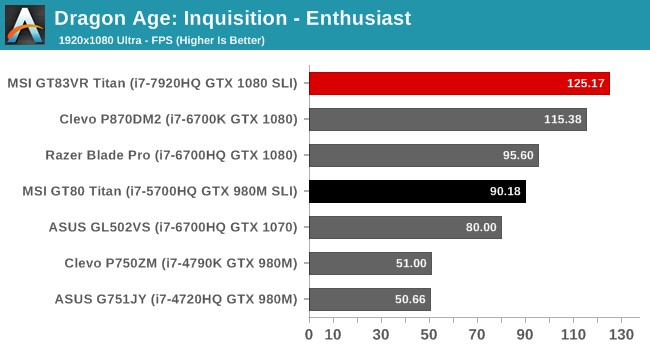 This is one of the best RPGs around, and even at 1080p, it can be very demanding on the GPU. With SLI, the MSI once again scores the highest we’ve seen on this test, although it doesn’t beat the single GTX 1080 Clevo by much. It would be nice to test this at higher than 1080p and see how it does, but the panel is the limit here. 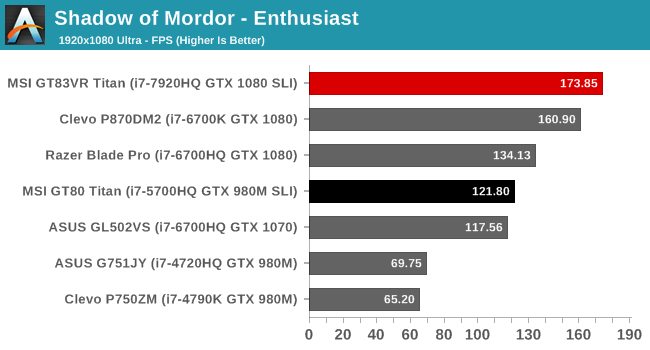 This is one of the rare games that lets you render the game at a higher than native resolution, so despite the ridiculous 1080p result of almost 175 FPS, we were able to run the test again at 3840x2160. The result was an impressive 118 frames per second on Ultra. It’s a great chance to see just how much the GT83VR Titan is being held back by its display. 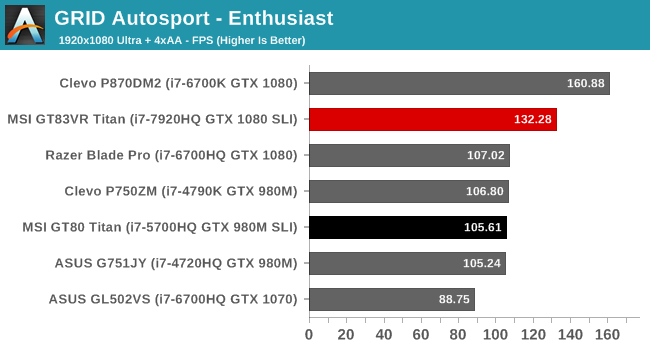 GRID happens to be one of the more CPU bound games around, and that shows itself here, with the MSI being bested by a single GPU Clevo with a faster CPU.

Having two GTX 1080 GPUs in a system has proven itself to be a very powerful combination. The move to Pascal has been a huge jump for laptop gaming, and the latest GT83VR Titan proves that in spades. The biggest issue is the GT83VR’s display, which is an 18.4-inch 1920x1080 60 Hz panel. The 17.3-inch class of notebooks has far more displays available, with both higher resolutions, up to 3840x2160, and higher refresh rates, and often with G-SYNC. When the GT80 Titan launched, a 1920x1080 panel was great, since it matched the 17.3-inch displays at that time, but over the last several years, the gap has significantly widened.

A single GTX 1080 is more than enough for a 1920x1080 display, even with the most demanding games, so adding a second one without getting a better panel is mostly wasted performance. As we saw in Shadow of Mordor, this is one of the few systems that could game well at UHD resolutions, so it’s disappointing to see it held back so dramatically by the display.

If you are going to use the VR portion of the GT83VR Titan, then the extra performance would be welcomed, especially since VR runs at 90 Hz and is more susceptible to lowered framerates. Although we don’t have a VR system to hook it to, it would be hard to imagine it not doing well in that scenario.