The ASRock UEFI firmware is consistent throughout its AM4 series, with the primary differences all coming in the way of simple aesthetics which is dependant on the series of motherboards. For example, the ASRock Phantom Gaming models have a black and red background, the X570 Aqua has the unique Aqua branding, while the ASRock Taichi series uses cogwheel Taichi inspired graphics. For the most part, the rest of ASRock's AM4 UEFI firmware remains the same, with minor differences coming in the settings such as controllers on Thunderbolt 3 inclusive models, and level of overclocking features which is dependent on the caliber and capability of the board. 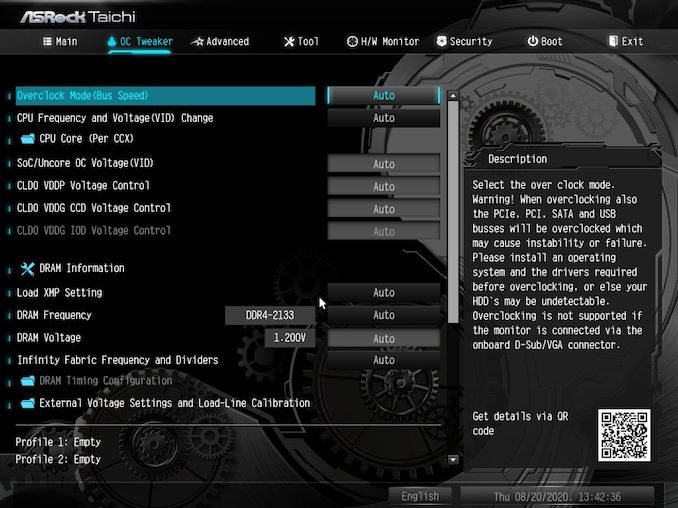 ASRock's UEFI firmware for the B550 Taichi features an attractive GUI which is based on a black ground with Taichi inspired graphics along the bottom and right-hand side, with the different menus available to select across the top of the screen. This includes the main section which is the initial screen upon entering the firmware. The text is white, with grey boxes and a light blue highlighter to signify which option is currently selected. 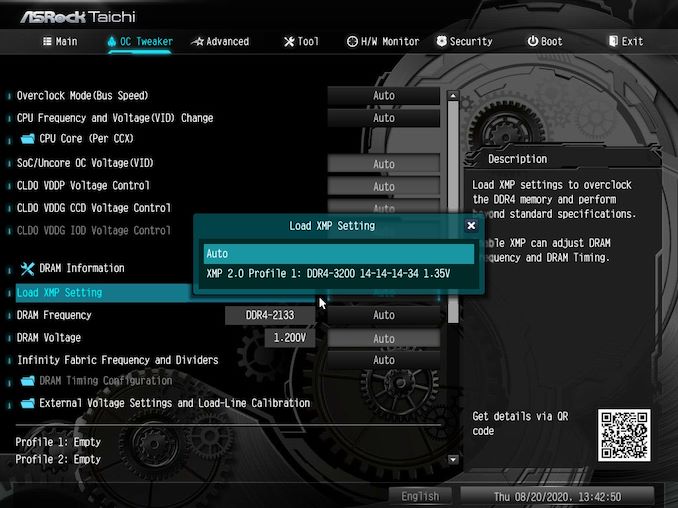 The primary options for overclocking are housed within the OC Tweaker section and include all the core options for overclocking the CPU and memory. This includes options for altering the CPU ratio and BCLK frequencies, as well as adjusting the CPU core, cache voltages, and SoC voltages. For users installing X.M.P 2.0 supported memory, users can enable these by selecting the relevant profile, although ASRock includes a rather extensive selection of memory latencies for users looking to fine-tune memory for maximum performance.

Other primary menus include the Advanced section which contains all of the CPU and chipset common options which includes AMD's Precision Boost settings. The tool section includes ASRock's Polychrome RGB settings, with other useful tools coming via the firmware updater and the SSD secure-erase tool. ASRock's H/W monitor displays a list of current temperatures, voltages, and status from the onboard sensors, while users can also configure ASRock's FAN-Tastic tuning utility for optimizing fan curves. The ASRock UEFI firmware for its AM4 models is easy to navigate and offers a wide variety of options for users to tweak their system.

At the core of ASRock's B550 Taichi is a software package is a flurry of useful applications and tools. At the heart of ASRock's software package is the A-Tuning software which allows users to apply overclocks to the CPU and change power settings within Windows. Other useful utilities include its Live Update and App Shop application where users can update to the latest drivers, as well as download applications, although it is riddled with Casino based games. ASRock also includes its Polychrome RGB software which allows users to customize the onboard RGB LEDs, as well as sync the lighting effects with compatible RGB memory, graphics cards, and the included RGB headers. To make use of the board's audio capabilities, ASRock also includes the Nahamic 3 software.

The ASRock A-Tuning software allows users to perform a multitude of customizations including CPU overclocking, adjusting fan curve profiles via the FAN-Tastic Tuning utility, as well as view a detailed list of system information. The main feature of the A-Tuning software comes via the OC Tweaker section which is similar to the functionality of the BIOS, but with fewer options. Users looking to overclock their CPU can use the A-Tuning to perform simple overclocks with options for CPU ratio and BCLK, with core voltage options for the CPU.

It's nice to see ASRock includes audio software in the bundle via the Nahimic 3 utility which allows users to equalize different audio aspects, and select between different preset profiles for different tasks such as gaming and movies. The ASRock Polychrome RGB software remains unchanged over previous iterations and offers plenty of visual customizations with many different lighting effects, and the ability to sync compatible components and peripherals within its RGB ecosystem.