Everything about the X seems like it can be followed up with a “that’s what she said.” The thing’s size, performance, how long it lasts - on battery of course. Seriously, you can mentally add that onto so many sentences, it seems as if the EVO and X are both answers to the proverbial question “why not?” 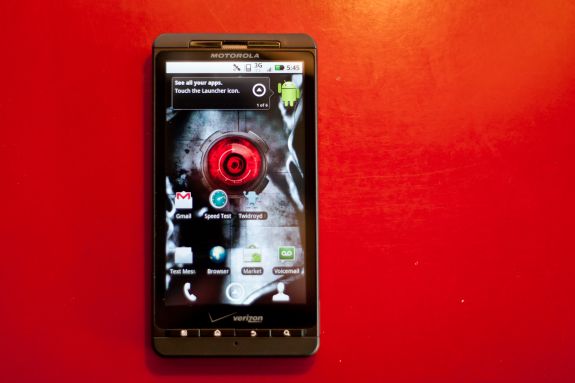 In reality, the 4.x” size screen phones seem a class of their own now, of which the EVO and X are newest members. Until we grow larger thumbs (genetic modification perhaps?) I think this is the upper limit for smartphone screen size until we get foldable screens. Any larger, and your thumb literally can’t sweep out far enough to reach the far corners of the screen. Anand has stated before that his cutoff size for when the tablet segment starts is at 5 inches; I think that’s right on the money. 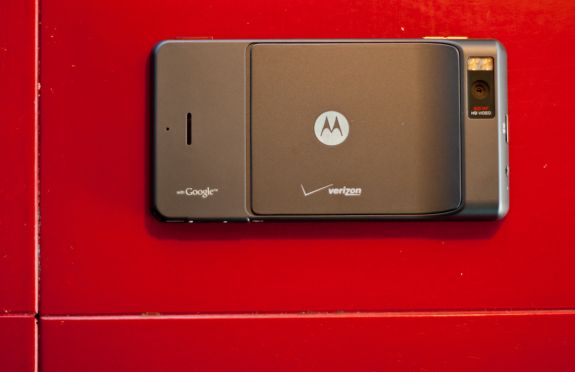 The X increases the screen size of the original Droid, while maintaining the somewhat unique FWVGA 854x480 resolution of the original Droid (Motorola erroneously maintains this is WVGA), compared to the more standard WVGA 800x480 resolution of other Android devices. The result is that dot pitch is a bit higher on the X than the EVO. It’s interesting that Motorola is sticking to FWVGA - this is admittedly exactly 16:9 aspect ratio and excellent for anamorphic videos, but no doubt still gives developers a bit of pause.

The other major change the X brings is TI's OMAP 3630 SoC with a 1GHz CPU core, but more on that in a bit. 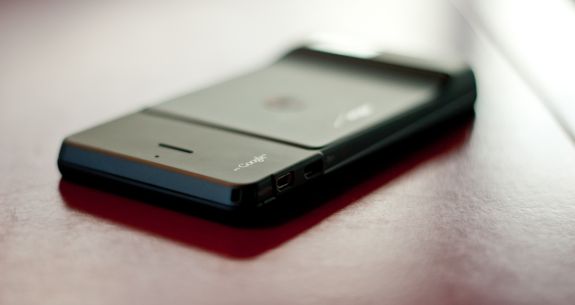 The X is also thin. Really thin. The majority of the device is 9.9 mm thick, while the top of the device is 1.4 cm. Motorola has made a tradeoff here - make the rest of the device thin and wide at the expense of a bulge in another location. That bulge, unsurprisingly, is the camera. The camera’s optical system simply requires a certain throw distance. Motorola could’ve made the entire device a uniform (and beefy) thickness, or do what it did and make a phone with a bit of a step.

But probably the biggest and most welcome change is that Motorola has ditched the ubiquitous capacitive buttons that have been an intermittent annoyance on some Android devices. 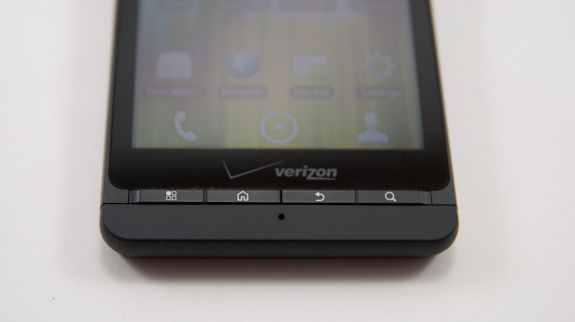 Some phones have pulled it off perfectly - the EVO’s buttons work fine, and the Motorola Droids that I’ve played with were perfect - but on others it’s a real scourge. On my Nexus One, the entire digitizer intermittently decides that keyboard presses map to menu, home, or back at times. Apparently I’m not alone either.

On the X, the row of buttons are the real uncut deal, and they’re perfect. There are really two sets of rocker buttons - the leftmost two is one rocker, the rightmost two are the other - but you won’t notice. They don’t jut out a lot, and don’t get pressed accidentally in the pocket. Right below the row of buttons in the center is one of three microphones on the X. 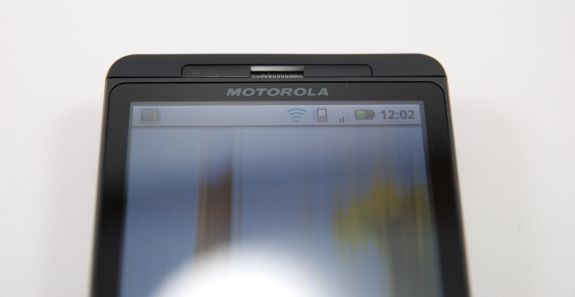 Up at the top of the X is the proximity sensor, notification LED and handset speaker. The proximity sensors are on the right side under the plastic, and the LED is on the left. There’s also the ambient light sensor up there.

On the right side of the phone are the volume up/down buttons, and the two level camera button. Motorola made a sort of big deal about their gold colored camera button on the original Droid, so I’m really confused why it’s a metallic red now. The volume rocker on the original Droid used to be stiff and problematic, the X’s is perfect. The camera button still requires a lot of force to click in all the way, and remains the only way to actually trigger camera capture. 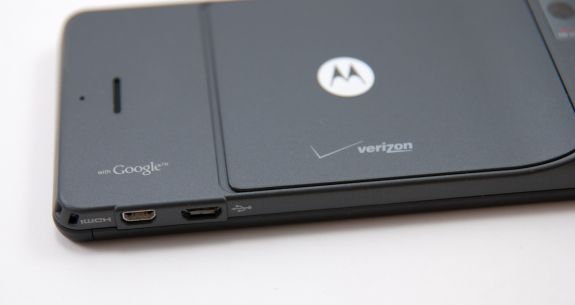 Moving around to the other side are the Micro-USB and Micro-HDMI ports. They’re a bit close together - maybe I’m special, but more than once I found myself trying to plug the USB charger into the HDMI port on accident.

Up top, there’s the power/lock button, 1/8” headphone jack, and a second microphone port. The top is slightly tilted - thankfully the power button doesn’t stick out normal to this surface, but rather perpendicular with respect to the display. Otherwise it’d get worn in really odd and probably fail fast. 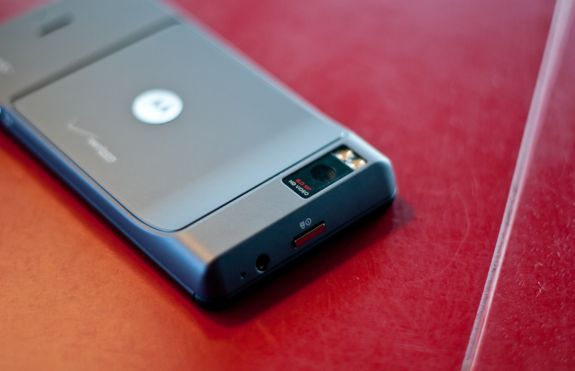 The bottom is where things are interesting. There’s the slightly raised 14 mm bulge where the camera and LED flash are, which rolls off over part of the battery door to the 9.9 mm thickness area. Finally, down at the bottom is the third of the X’s microphones, and a slit for the speakerphone. You can slide a fingernail in there, but there’s thankfully a fine mesh preventing pocket lint from collecting inside. The Motorola logo has some pattern to it, so it shouldn’t rub off.

In the Motorola Droid review, I talked a lot about the beefy metal battery door. I’m pleased to report that the X has one as well, and it slides on and off snug and secure, doesn’t creak, doesn’t vibrate. It’s solid. Under that door is battery - you have to pull up on a tab to get the battery out. Once it’s out, you can get to the preinstalled 16 GB microSD card. The card doesn’t have a push-click mechanism, it simply slides in and out. 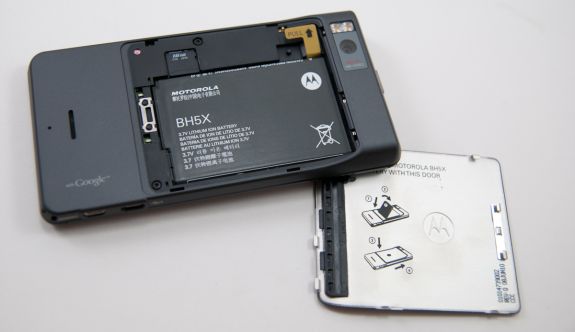 My only complaint about this pull tab battery release arrangement is that you pull and rotate the battery about the wrong axis. The battery slides in and goes down along its long axis, while the tab pulls up and kind of pries the battery against the way it slides in. I could see someone - if they’re not careful - being aggressive and breaking something, but I’ve yanked the battery numerous times to get the SD card out and haven’t broken anything yet. Just be careful.

Looking carefully, there’s a gold contact switch next to the pull tab which clearly makes contact with the metal underside of the battery door. You can see where it’s made contact with the door and left a little mark as well. More on that later.

The plastic exterior on the X feels rubbery - it’s got a grippy tack that has lasted a few solid weeks of my greasy hands, and doesn’t slide around. On the front at the very top and very bottom, the plastic bits seem to actually be a stiff rubber. Not sure why you’d want those parts rubber, but they feel different and more rubbery.

Overall, the build quality of the X is solid. Motorola has pulled off two high end Android phones that really feel good and inspire a lot of confidence. There’s no give or play with any of the buttons, the volume buttons aren’t loose and broken out of the box like some Droids were, and the grippy plastic makes it feel even better. Again, I think having the phone tilt a few degrees and not rest completely flat on surfaces will help the back not get scratched up.