The SGS3s all ship running Android 4.0.4 (IMM76D), which is just a few builds short of the current latest version of Android. Atop that is the latest version of Samsung’s controversial TouchWiz theme. Like almost all skins, that means a different lock screen, tweaked notifications shade, main launcher, and settings pane.

On the lock screen, there are application shortcuts which can be customized, along with a few other options. Weather, stock tickers, and an optional gestural camera shortcut are all TouchWiz enhancements. Like SGS2, missed calls or SMSes can also be directly addressed by swiping on their respective icons. 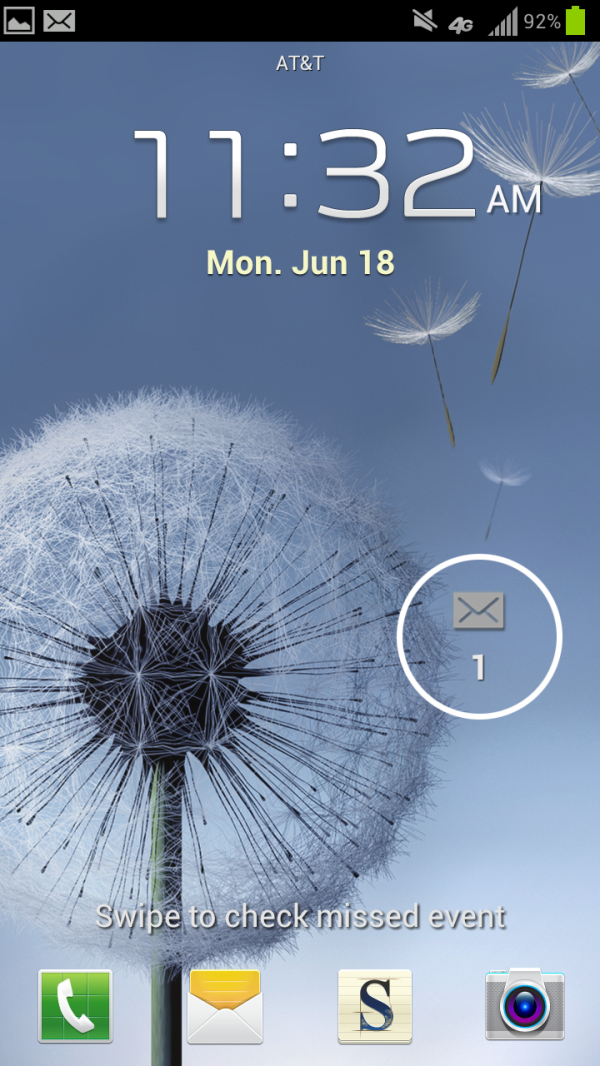 In the notifications shade, Samsung has added more power toggles. The bar slides right or left to expose those additional toggles. There’s also the date now printed alongside carrier, just left of the shortcut into the settings app which is standard in ICS. Speaking of the top status bar, TouchWiz also adds an optional battery percentage report - it blows my mind that this has been something you’ve needed to use a custom ROM to get for so long. 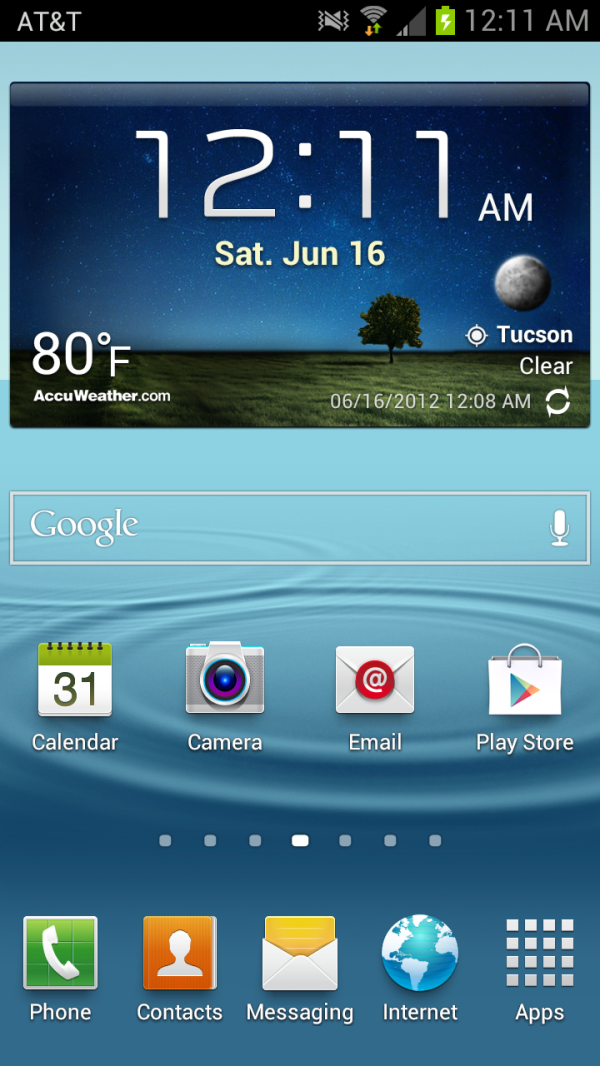 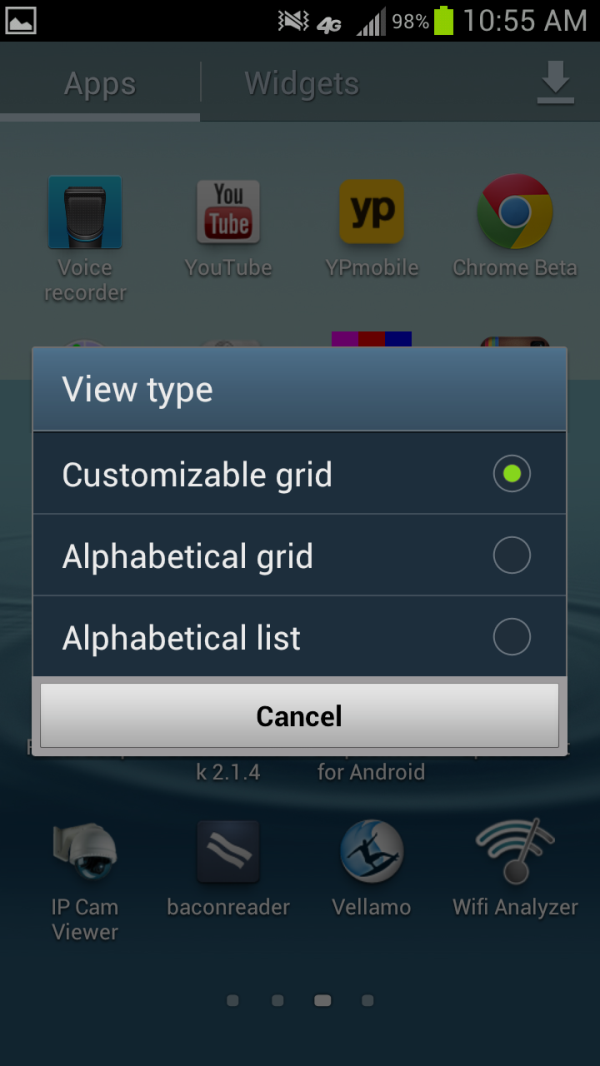 Samsung’s TouchWiz home screen goes with a 3D box left/right transition rather than the ICS stock planar swipe. For the most part however, the flow isn’t really changed from ICS. Widgets are added from a separate tab in the applications launcher, and Samsung hasn’t overwhelmed with way too many custom ones. The launcher is likewise a horizontally paginated application grid just like ICS. This can be sorted alphabetically or in a customized arrangement where newly downloaded apps get placed at the end of the list.

Settings gets a few new options that I think are worth going over. First is the obvious visual change which includes colorful icons that seem a bit corny but aren’t surprising. First is an option to customize the notification LED, but is pretty basic and probably will be supplanted with Lightflow for power users. Under Display is the option to enable “smart stay” which uses the front facing camera and keeps the display on when you’re looking at it, beyond the timeout length. I found that this does indeed work well, as long as there’s sufficient illumination for the front facing camera to see your face. 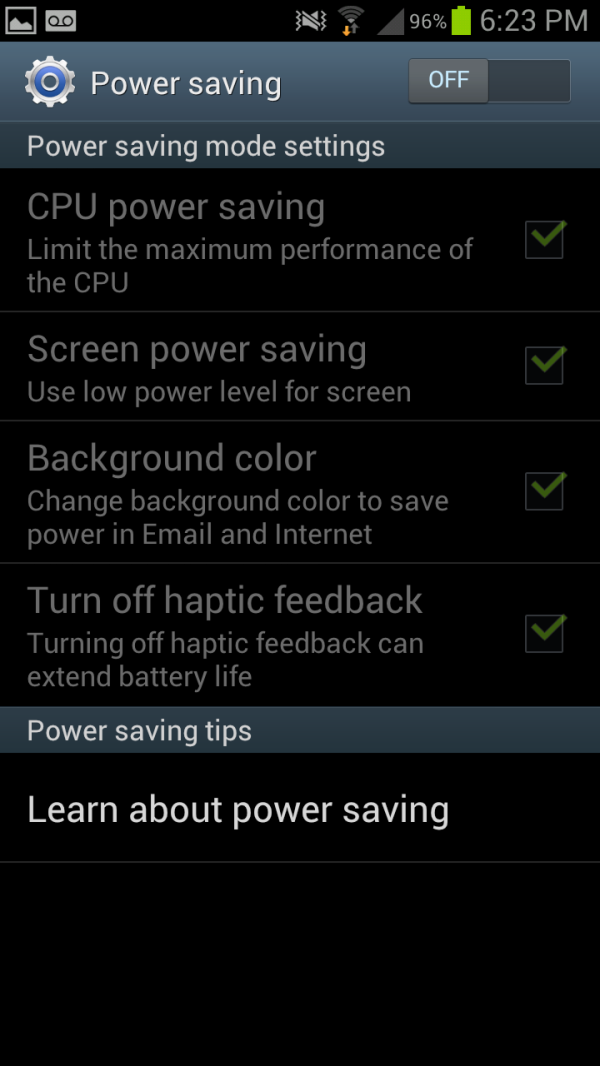 The next is more interesting - Power Saving. Under here is an option which enables you to change the SoC governor. Tick “CPU power saving” and the maximum MSM8960 CPU clock gets changed to 1.0 GHz instead of 1.5 GHz, giving you a nice savings if you’re willing to sacrifice some performance in turn for running with lower active power draw. I believe GPU clock also gets clamped as well, but can’t pull those directly. Outside of rooting and messing with the governor yourself, and a governor option pane on some ASUS products, this is the first time I’ve seen direct user access to CPU frequency since PocketPC days. 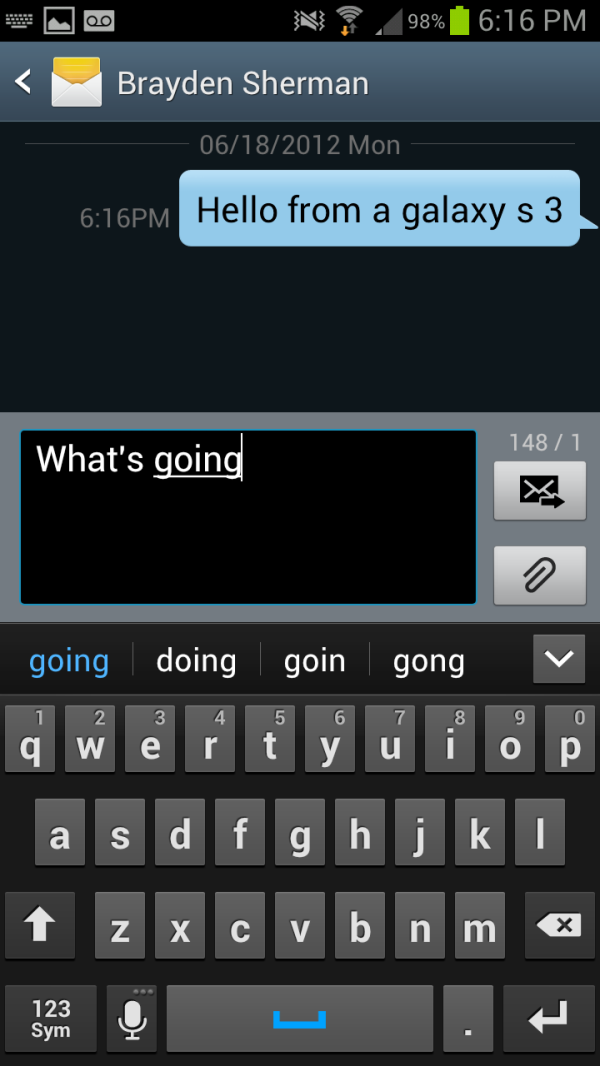 Also present are motion gestures, a lot of which I’ve seen before but never really fully utilized. Under security is that options pane I was talking about earlier for customizing the shortcuts on the lock screen, and enabling that camera launch gesture. Samsung also goes with its own browser customizations for Android 4.0.4’s stock browser, but it doesn’t deviate too much beyond just UI changes from what I can tell. Just like previous Samsung devices, I find the browser super smooth - gone are the days where browsing using the stock browser was a shuddery mess, though I still prefer Chrome Beta.

Messaging also looks very similar to how I recall it looking on the SGS2. Dialer also gets a change up and still includes a smart dial functionality.

Other than software preloads, which will differ between each carrier device, is Dropbox. Both Verizon and AT&T have opted out of the 50 GB for 2 years promotion, however the other carriers continue to enable this. I was told that the carriers who have opted out have done so because they view Dropbox as a competitor to services they’re backing or selling. I’m now up to 131.2 GB on my personal Dropbox account between free quests, the One series promotion, and SGS3 promotion.

The last part are two S - features. S Beam, and S Voice. S Beam is essentially a WiFi Direct augmented version of Android Beam to enable sharing more content than just what can be sent over NFC’s limited bandwidth. The gist of it is that you can send photos or files (even large video files) using S Beam over the WiFi direct link which gets setup using NFC. For example, from gallery, one can open a video, then put two phones together, tap and hold on the prompt, and NFC takes care of both setting up the WiFi direct connection and file transfer. In practice it works surprisingly well, even for large video files. I played around and saw a rate around 40 Mbps for transfers, which is pretty close to Samsung’s cited “1 GB in 3 minutes” (45 Mbps) speed. 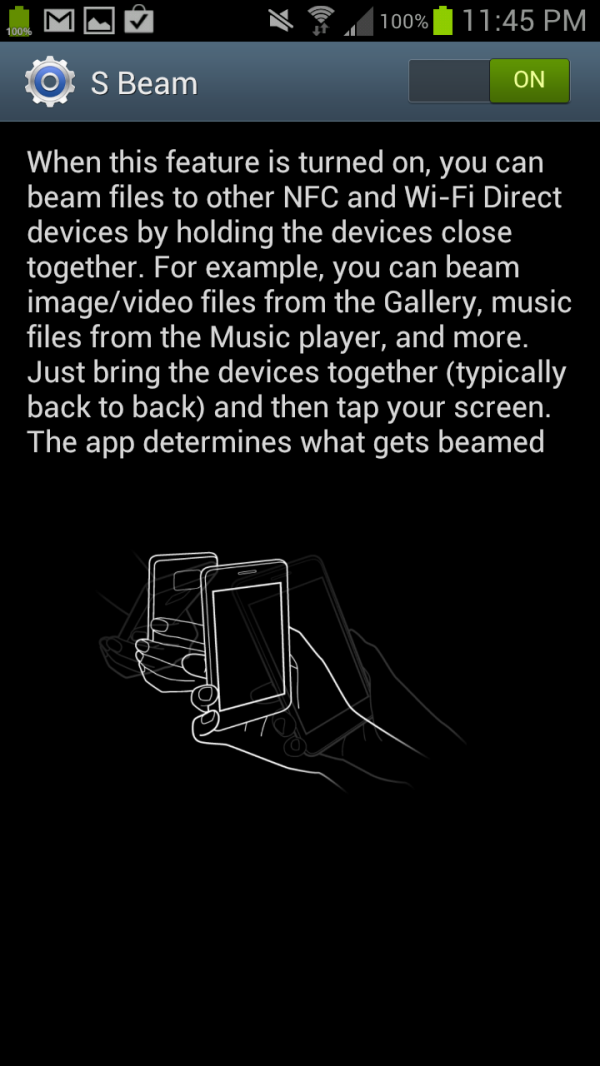 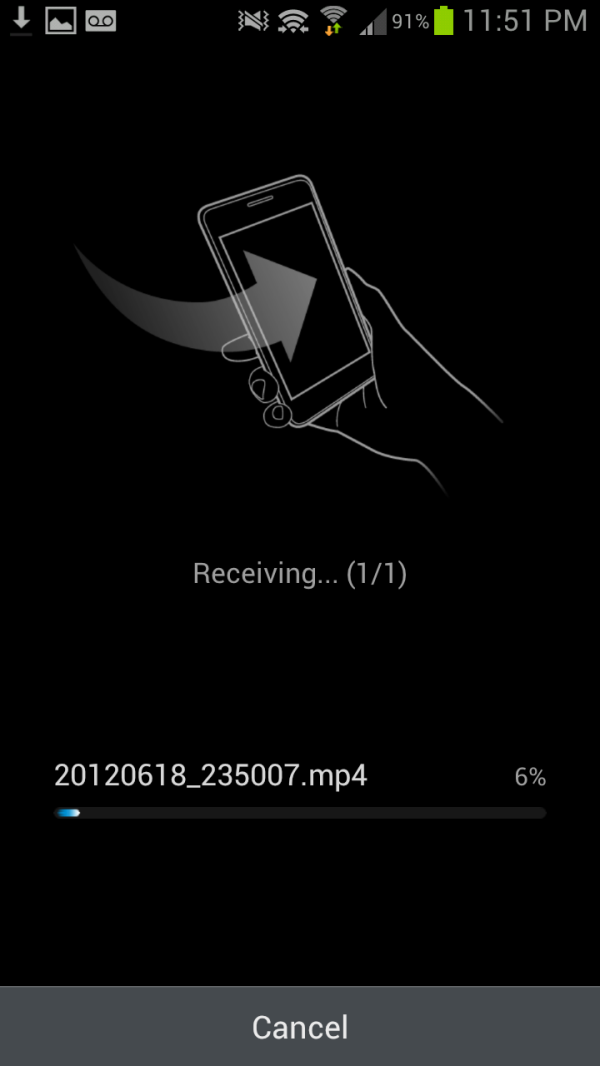 Part of S Beam is the TecTiles initiative, which is a combination of the TecTiles programmer application, and Samsung branded programmable 1KB MIFARE tags available in a set of 5 from carrier stores and online. Even though there are other NFC tags available for cheaper, and similar applications on the market, getting this in a prepackaged format into customers hands will go a long way to driving NFC adoption, which until now has been glacially slow. I programmed both my contact data and my WiFi network (hooray, no longer will I type my 20+ character PSK into new phones, at least those with NFC) into tags. 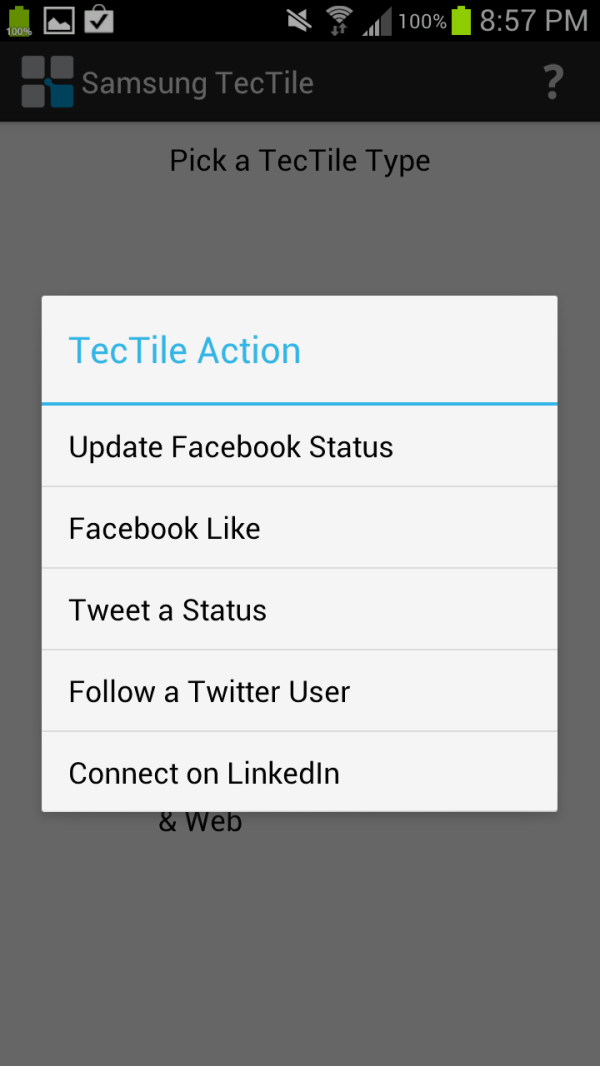 There’s also AllShare Play, which allows you to broadcast either a document, files, or photos to up to 6 devices on the same WiFi network. Trying out sharing features was partially why Samsung sampled two SGS3s, so I gave AllShare a shot with my 100+ MB electromagnetics textbook PDF scan from my ECE381 days. Sure enough, it was possible to jointly browse slides and annotate on the two SGS3s - each member of the AllShare session gets their own colored pen for annotating. I could see this being useful if you managed to round up a number of friends with SGS3s. I wish that the resolution was higher, but if I had paginated this book to be single pages instead of spreads it likely would be sufficient to read the body copy and equations.

Last but not least is S Voice. There’s no putting this lightly - S Voice is definitely a Samsung approximation of Apple’s Siri. The promise is a similar level of conversational interaction with S Voice going off and fetching data from appropriate pre-programmed sources and reporting back. A double tap on the home button fires up S Voice, and a familiar tappable microphone interface guides you through voice prompts.

You can do a similar list of things with S Voice as you can with Siri, including asking for the weather, calling people, adding tasks, and setting alarms. A few S Voice features that were previously above and beyond Siri (such as launching apps) are now part of iOS 6, but in theory the level of functionality is pretty close. I’m actually fairly surprised about how much the functionality matches, and wonder if this is the new thing that Apple will attack aggressively with litigation. In practice, I found S Voice a lot less conversational than Siri. I still think voice navigation is kind of a trendy feature that ultimately is slower than just using my hands, unless you’re driving and can’t use the phone.