Like cars and, now, the iPad, Amazon is naming their latest Kindle Fire exactly that (just Kindle Fire), though this is definitely a second generation tablet. The differences are slim but noticeable; a slightly faster 1.2GHz clock speed, up from 1GHz, and double the RAM at 1GB. Users also get significantly less storage space, down to 5.5GB from 6.5GB, with no option to expand memory. The majority of changes made to the Fire aren't hardware-based though; it's in the software.

That said, current Fire owners - myself included - can expect some of the software upgrades to be implemented on last  year's model, but Amazon is not revealing what updates will come to the 1st generation units. We'll have to wait until next week, when the new Fire releases, to see what changes are implemented to the original Fire, if they even release simultaneously. 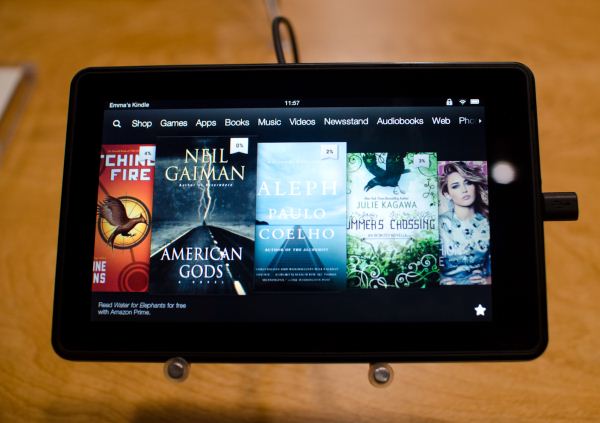 I spent some time with the Fire, which was almost forgotten in lieu of the newer HD models. It's quite speedy, even considering the lower-end OMAP 4430 powering the device. While both the Fire HD units stuttered occasionally in demos, the Fire did not. It consistently ran smoothly, whether I started playing video, opened a magazine or app, or played in the web browser.

The sense I got from the newer Fire is that it's both meant to replace last year's model while simultaneously acting as a bridge for users skeptical about a tablet from Amazon. Or, for users who just want to watch Prime videos anywhere in their own home and don't need the upgraded display, additional horsepower, or thinner size. As the only Fire tablet not displaying video at HD quality, this model would best serve older people who want to watch, well, older videos available on Prime that don't have HD versions. The thicker build is certainly easier to grip two-handed, and it feels more stable than either of the HD models.

Yet because of the speed of the device, likely thanks to no HD visuals, anyone who won't nitpick about not having video and pictures HD-crisp may have a better experience with the lower-end and less expensive Kindle Fire than the Kindle Fire HD models. Even though they are more powerful devices, it's unclear if they have the increased bandwidth to offer the same speed and fluidity in everyday use that I experienced in ten minutes playing with the standard Fire.