In recent chipset iterations, ASRock has pushed more than most other manufacturers in order to get their BIOS to feel more like an interactive bit of software.  From the early blue/dark-blue beginnings, we now get audio confirmations of options and a glittery background that twinkles.  We also get some higher definition icons, but the only thing missing is a paradigm shift to something completely and fully interactive, rather than a derivative of an old-style BIOS and a re-skinning of off-the-shelf code.  My own personal feelings of what a BIOS should be like aside, the ASRock implementation is still better than most on the market.

On booting the board, the user is presented with the option to press ‘X’ on the motherboard to activate a new feature called ‘X-Boost’ which ASRock are often promoting on social media.  Initially I did not see this option because one of my monitors is too slow to show a screen (or one could argue the ASRock board boots too fast, but my testing gave it 12.61 seconds to finish POST).  But this option, when enabled, will cause the system to hard reset, and the CPU is boosted in performance.  For the A10-5800K, this meant a boost to the highest turbo multiplier, giving 4200 MHz no matter what the CPU loading (compared to the different turbo speeds depending on workload).  This is essentially a version of MultiCore Enhancement/Acceleration for AMD Trinity processors, and every processor should happily perform at this speed.  As with our testing methodology, as it is not enabled by default, we did not use it.  Surprisingly, X-Boost did not enable the XMP profile of the memory – I initially thought that was because it was an AMD platform, but given that I can happily set an XMP profile manually in the BIOS, it was all a little strange.

Rather than split the action behind an easy and an advanced mode, we get straight into the meat of the BIOS with the ‘Main’ menu.  This menu does part of what I think all BIOSes should do – tell us exactly what we are dealing with in terms of the motherboard, the motherboard BIOS version, the processor, the current speed of the processor, the total memory installed and the speed of that memory.  All that is missing is the CPU temperature, some important voltages and perhaps some fan speeds as well.  The sole option on this screen is the ability to adjust which page is seen when the BIOS is entered by default – this is of most use to overclockers who will select the OC Tweaker menu. 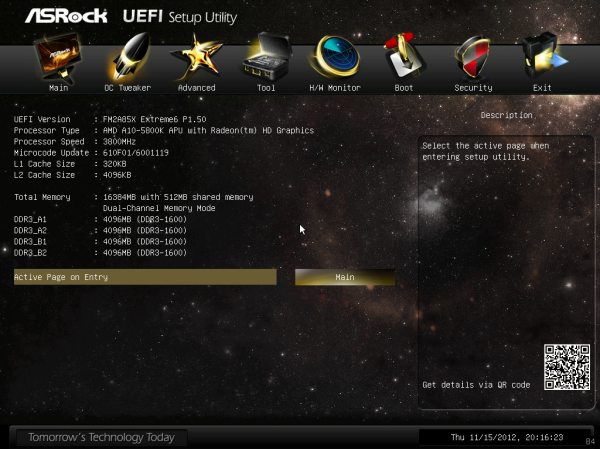 For speed enthusiasts, the OC Tweaker menu is the place to be.  A little different to previous ASRock designs, instead of a wall of options for everything in the system, the options are split into sections governing important areas.  We have a top option for an easy OC Mode which offers speeds from 4200 MHz to 4600 MHz in 100 MHz intervals – these are usually slightly looser OC settings than ideal in order to include the majority of processors and the variable overclocking characteristics possible.  Also in this menu is a manual overclock mode dealing with multipliers, AMD’s Turbo Core Technology, load line calibration and the iGPU clocks/voltages.  The memory speed and timings are further down in their own section, as well as the secondary voltages in the system.  In our testing, we were unable to get our G.Skill 2400 9-11-11 memory kit to work at XMP, but our G.Skill 2400 10-12-12 worked fine.  As per our previous FM2 review, we ran the 2400 9-11-11 kit at XMP but reduced the multiplier for an effective 2133 9-11-11 setting. 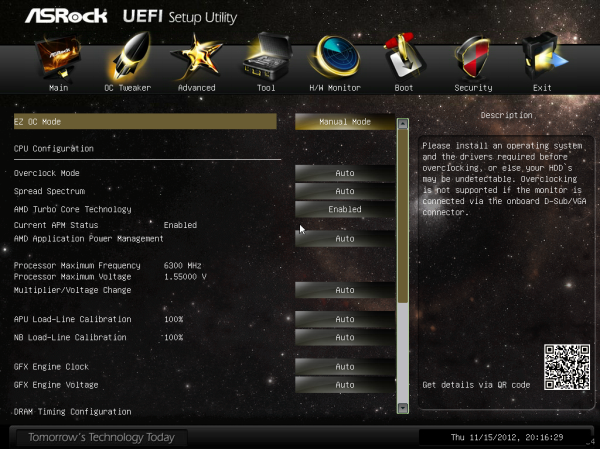 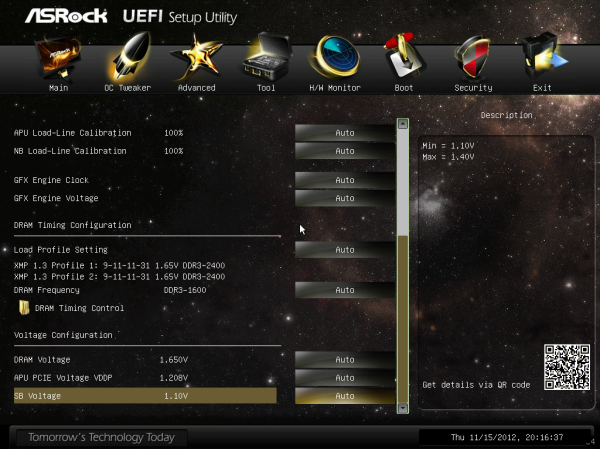 The Advanced menu from the top icons gives access to the other configurations on board – storage, North Bridge, South Bridge, controllers and USB et al.   The newer options that ASRock put on their products get crowbarred into the Tools menu - the system browser is used to diagnose if a PCIe device or memory stick is not working.  The OMG (Online Management Guard) is to disable usage of the LAN for specific hours of the day.  The dehumidifier function is to spin up fans when the computer is turned off to equalize water vapor concentration as the outside temperature changes; and we also get options related to BIOS flashing. ASRock is still the only motherboard manufacturer that actively advertises a BIOS that will contact the manufacturer servers for the latest BIOS then download it and apply automatically.  We also get the option to save the BIOS settings to one of three profiles here. 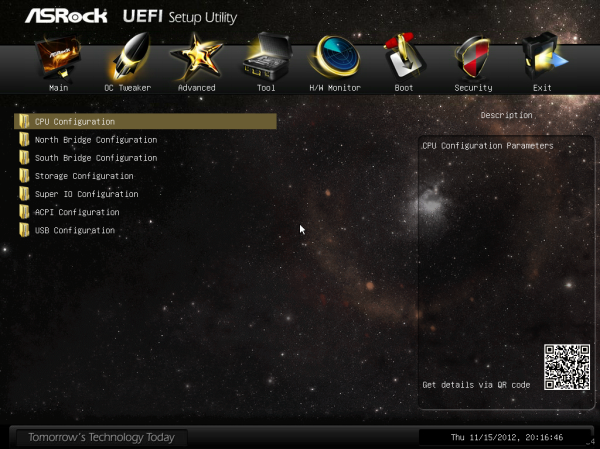 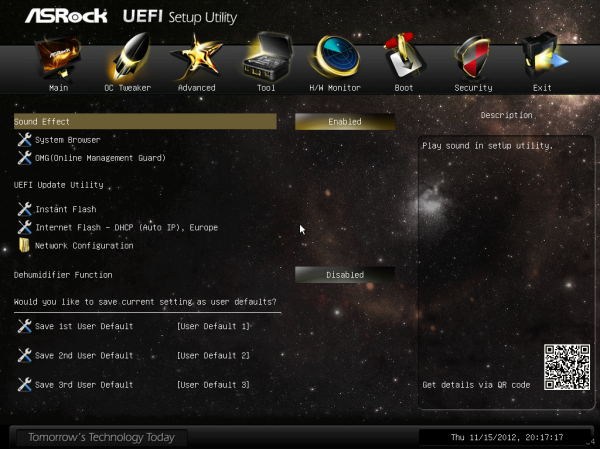 The fan options are in the H/W Monitor menu, and give us controls over the fans in four segments – the CPU fans as one, and three chassis fans get their own control.  By default these fans are put at full speed no matter what the temperature.  This is a power play on the part of ASRock to get better results in temperature readings at default, as some reviewers (as I did previously) include temperature readings without audible readings.  However, these fan options can be changed to speed profiles or as a particular ramp from a Level 1 (shallow) ramp to a Level 10 (fast) ramp.  Ideally we would see a fully selectable graph showing RPM vs. temperature with configurable controls, but no motherboard manufacturer has yet decided to put this on their systems, despite the ease with which it could be done in software. 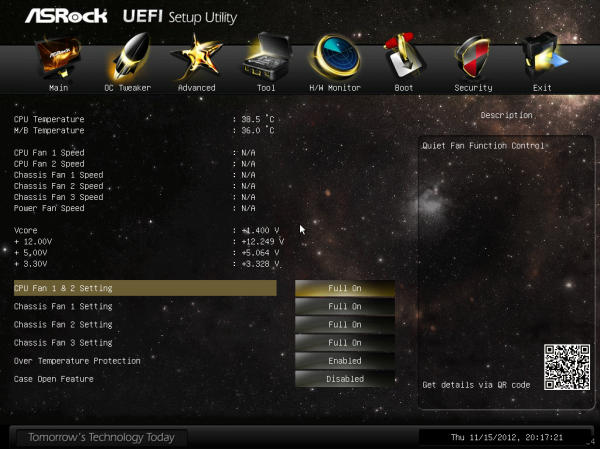 Other options in the BIOS relate to the boot order, boot failure from bad overclock settings, security, and exiting the BIOS.