Corsair Carbide 200R Case Review: How Low Can You Go

I can't believe I'm saying this, but installing our testbed into the Corsair Carbide 200R was actually somewhat fraught. Corsair cases are usually what I work on when I need a break, when I want something relaxing, but the Carbide 200R was surprisingly frustrating.

Things started as well as they usually do. The built-in motherboard tray centerpost allows you to easily line the motherboard up with the standoffs, and the tray itself already has the standoffs installed. You can also manually remove them and move them depending on the type of board you're installing. For what it's worth, getting the video card and power supply in is also pain free.

The custom designed plastic toolless drive cage in the bottom of the case is a nightmare, though. As is typical of cases, the included cardboard box of accessories (screws and so on) is mounted in one of the 3.5" bays. Unlike other cases, though, the box required a tremendous amount of force to remove, so much that it actually snapped some of the plastic on the right side of the cage. Drives are essentially supposed to be held in place by a combination of the pressure of the cage and a peg on the left side that's attached to a tab. Forcing out the box and then forcing our Corsair Link box into the bay was way too difficult; it would've been quicker and easier just to use thumbscrews in a conventional mounting scheme. 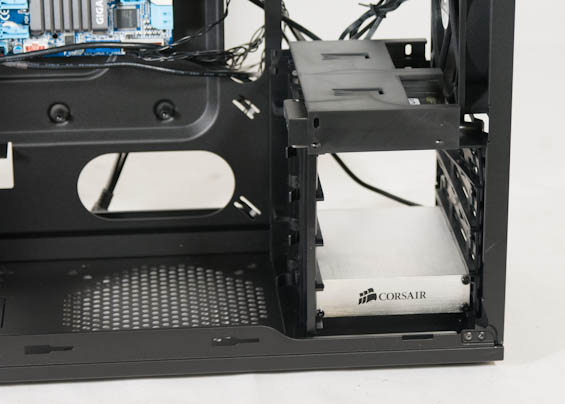 Installing a 2.5" drive is a lot easier, with a single plastic wedge holding the SSD in place. 2.5" drives are stacked on top of and next to each other in a two-by-two layout, but their power and data connections face the interior of the case instead of behind the motherboard tray. I'm not sure how I feel about orienting them this way (ignoring how questionably secure the drive was); it makes it easier to run a power cable from the optical drive in the top of the case, but also clutters the interior in ways I'm again just not used to seeing in a Corsair product. 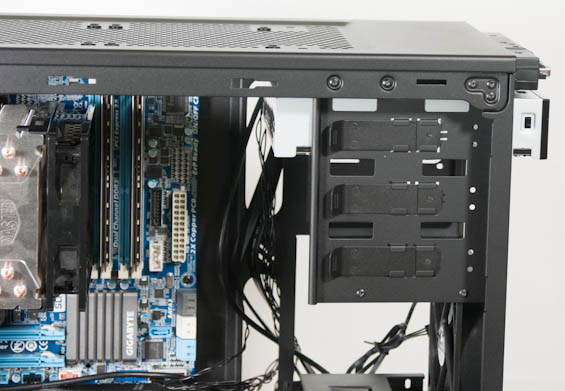 As for the 5.25" bay, the metal latches used seemed more stable in other case designs, but in the 200R they're about as secure as a 14-year-old nerd in a high school locker room. Corsair also only includes them on one side instead of both sides. You're going to want to use screws to lock the drive into place, as I fear it might be too easy to push the drive past the latches and into the case. 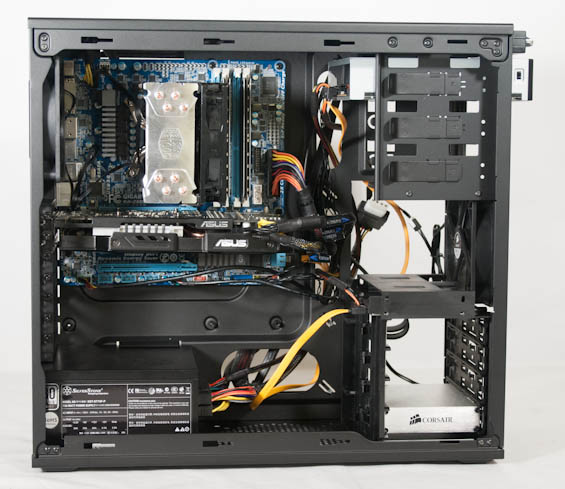 Finally, cabling went fairly smoothly, but the two fans in the 200R only include 3-pin headers and no molex adapters. For most users this isn't going to be a problem, but our testbed motherboard only features one additional fan header beyond the CPU header. That meant having to fish out a spare adapter (thankfully kept on hand for just such an event). Also, again, note that because of the orientation of the 2.5" drive bays, wiring up SSDs is going to busy up the interior of the case a bit more than I'd like.

I recognize I have a habit of nitpicking, but Corsair falls victim to their own standard when it comes to assembling the Carbide 200R. The toolless drive cage was a source of incredible frustration and feels completely out of step with the rest of the case, and while it's good for companies to at least experiment and try new things, I think a more conventional cage would've been a better choice even if it meant sacrificing some capacity. Everything else comes together fairly smoothly, but a molex adapter for at least one of the case fans along with a smarter drive cage design (and smarter toolless designs for the optical drive bays as well) would've gone a long way towards living up to expectations.