In and Around the SilverStone Sugo SG08

If you review computer hardware for long enough, your relationship with aluminum becomes a fairly complicated one. Review cases and you start learning all kinds of crazy things about building materials, eventually developing your own preferences. I'm pleased to say that this is one thing SilverStone continues to do very, very right.

There isn't anything especially outlandish about using a brushed aluminum fascia with an SECC steel chassis and shroud, but SilverStone opts to use thick material in the construction of the Sugo SG08. The front fascia is 10mm aluminum while the external shroud is exactly the right thickness of steel to be flexible enough during reassembly without being chintzy or overly fiddly. SilverStone's aesthetic with the SG08 is tame and effective, with a completely flat, unventilated front followed by a veritable mountain of ventilation on the top and sides. Interestingly, there's virtually no ventilation on the rear of the case; I suspect this is a deliberate choice to channel air as directly down to the CPU as possible.

Instead of thumbscrews, the SG08 has three standard screws that hold the single piece shroud in place. Remove that, and you're left looking at one of SilverStone's classic puzzle boxes. 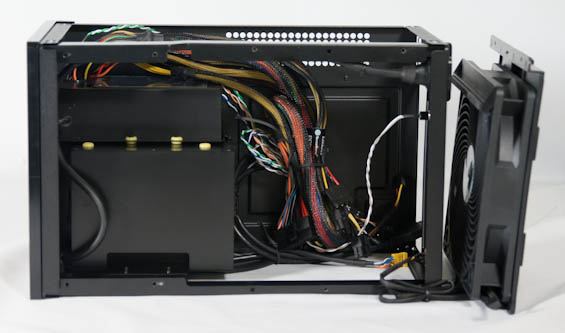 While the interior of the SG08 is fairly intimidating at first, there's always a logic to SilverStone's designs. Like a good sandwich, a "stacking order" must be adhered to. At the top of the case are the intake fan bracket and the slimline optical drive tray. Remove those and you have access to the motherboard tray itself and the storage drive cage. Remove the drive cage and you're left with the preinstalled power supply. It should come as no surprise that interior real estate is at an absolute premium, yet what's perplexing is that SilverStone opted to install the reset button on the back of the case. Leaving it in the front where it typically resides, even recessed, would've been much more ideal, as you now have front panel headers crossing essentially the entirety of the interior.

There aren't really a lot of surprises when it comes to the Sugo SG08. I like the aesthetic overall; it's simple but effective and won't look out of place. It's easy to be intimidated by the internal layout and you can tell almost immediately that closing up is going to be a pain, but when you get down to an enclosure this size, a lot of sacrifices are going to be made. Could the design of the SG08 be simpler? Probably, but how much so I'm not really certain.