The jump in the ASUS BIOS from X79 RIVE to X79 RIVBE comes by virtue of the Maximus VI Z87 range of improvements.  The main additions, as we saw with the Maximus VI Impact review, come from the My Favorites list, allowing users to select certain options and create a menu of their own, SSD Secure Erase to pass the ATA Secure Erase command to compatible SSDs, the Last Modified popup that lets overclockers know exactly what has changed between BIOS saves and, for the RIVBE, the black theme to go along with the black edition.

The big one is SSD Secure Erase: 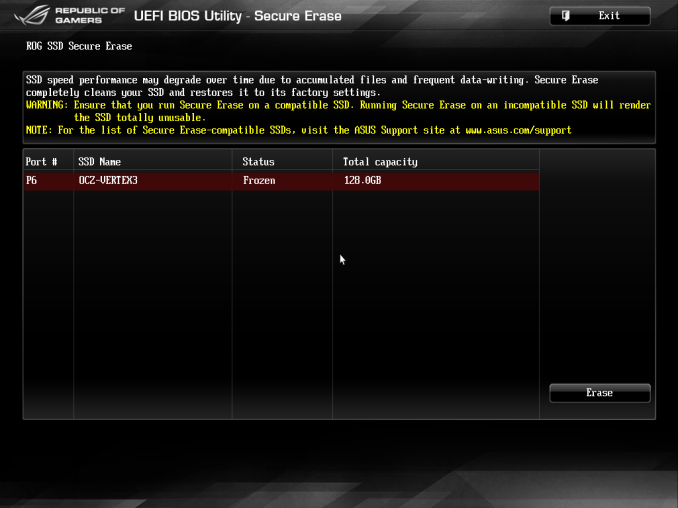 ASUS would like me to point out that SSD Secure Erase is best used for SSDs that pass ASUS’ quality control list; any SSDs not on that list could exhibit non-standard behavior and be rendered unusable by SSD Secure Erase.  This mainly relates to older models or those that use uncommon controllers – all modern Sandforce, LAMD, Samsung and JMicron drives should be covered, and modern drives from major consumer manufacturers in the future are likely to work (with latest BIOS updates of course).

Alongside SSD Secure Erase, ASUS’ new features include a customizable options menu, allowing users to select any option for the BIOS into a ‘my favorites’ menu: 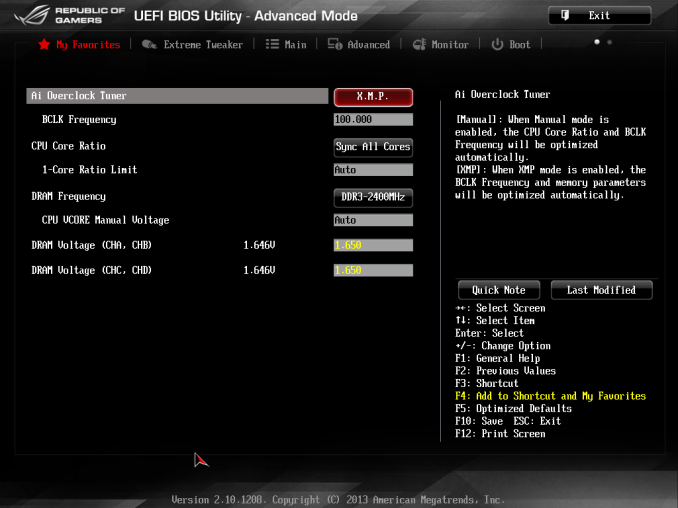 On the right of this image we see two further options: Quick Note and Last Modified.  Quick Note is essentially Notepad in the BIOS, where you can save a message or overclock suggestions for later.  Last Modified (which is also activated when you exit the BIOS) shows all the changes made since the BIOS was first entered, allowing users to dissect any overclock options that were selected.

For the ROG range, ASUS is including a few overclocking presets to help the extreme overclockers: 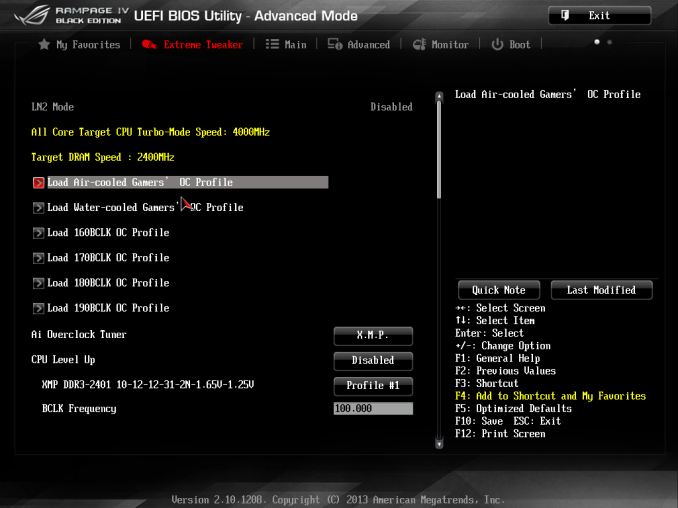 ASUS over generations still keep opening up various options in the BIOS for tweakers to go nuts, as shown by pages and pages of options.  Even as a motherboard reviewer and an overclocker, I have no idea what half of this stuff does, but ASUS regularly provide extreme tweakers with memory presets to overclock some of the high end kits: 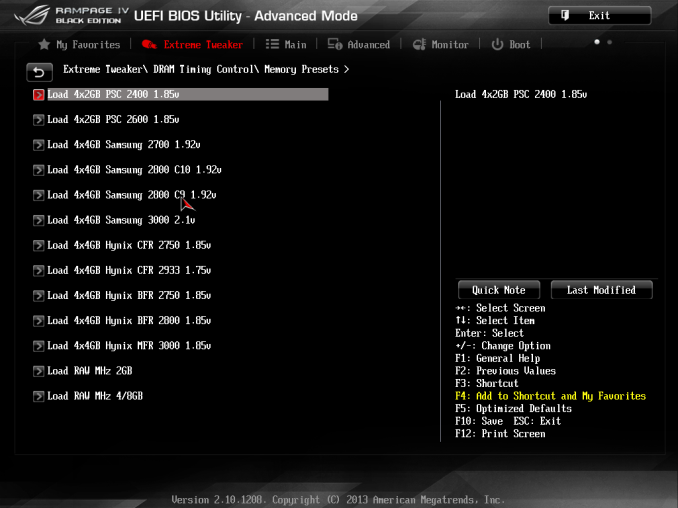 Other manufacturers are coming around to this way of thinking, with each setting requiring extensive knowledge and QVL.

By default, ASUS ROG motherboards go into advanced mode, but there is an easy mode to access: 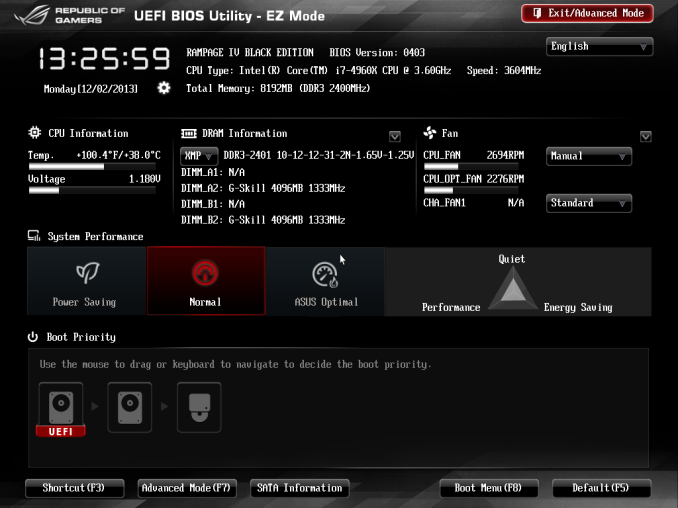 To put the ASUS BIOS into perspective: a modern graphical BIOS has around 20-30 different screens for me to screenshot, whereas an ASUS BIOS continually requires 50+ to organize.  Ultimately what each of the screens say is more important than how many there are, but ASUS like to offer a lot of control to those that understand the system underneath them.

The software from ASUS has taken a jump from flash based version of AI Suite of Z77 into a Java based design.  This means that on loading the software, you might be asked (if connected online) to update Java to the latest version, which is usually recommended.  As mentioned in our initial ASUS Z87 Pro review, the new version of AI Suite centers on their DIP4 interface: 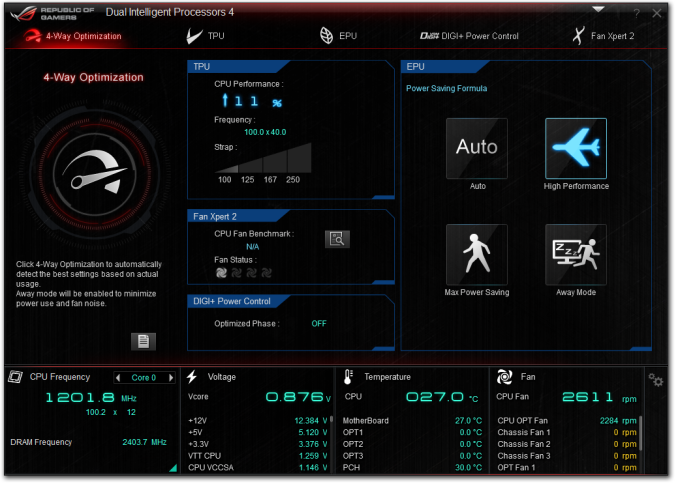 From this simple screen users can see the CPU details, temperatures, voltages, fan settings, current overclocks, power usage, and preselect one of several power modes.  Users might also notice that the CPU reported in this software is around ten degrees lower than the BIOS/CPU reports, due to an internal sensor calibration by the software to more accurately portray what is happening.  However, from this menu, users can select any of the overclocking tools; first up is TPU, which organizes CPU overclocks and voltages: 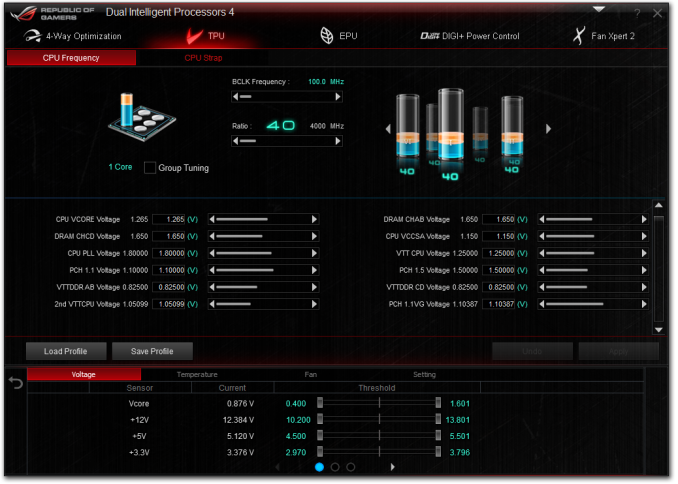 EPU for energy monitoring and performance: 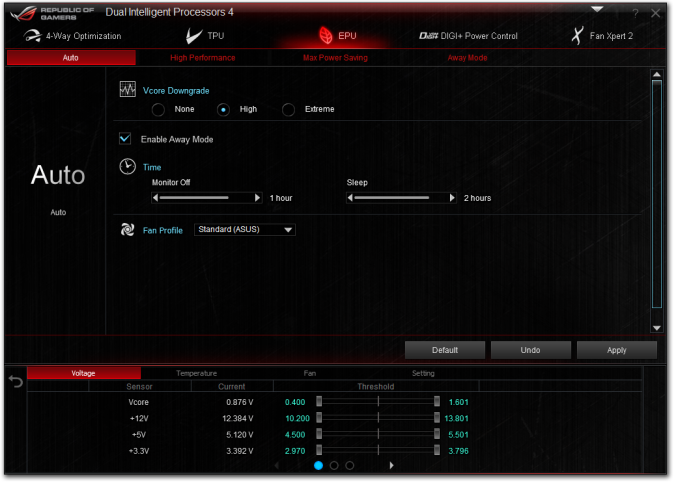 DIGI+ Power Control to customize the power delivery and Fan Xpert 2 which tests each fan plugged into the motherboard to test for true power/fan speed ratios: 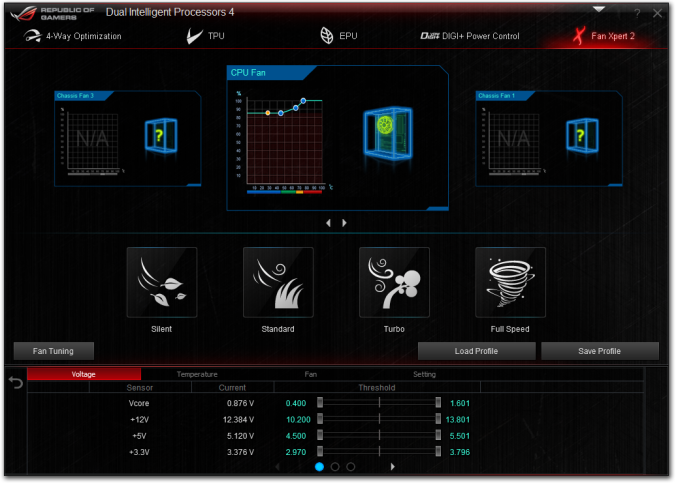 The 4-Way Optimization method on the front screen uses each of these in turn to find a batch of settings to help with both overclocking, fan speed and power usage.  Our quick blast with 4WO gave a simple 4.1 GHz overclock, which pretty much covers all i7-4960X CPUs sold.

The all new AI Suite also comes with standard features we have covered in previous reviews:

- USB 3.0 Boost:Replaces the Windows 7 driver for better USB 3.0 performance
- EZ Update: Connect to the ASUS servers to update the software and drivers; I still have trouble getting this to work to be honest.
- USB BIOS Flashback: Allows users to set up a USB stick to flash the latest BIOS to the motherboard without needing a CPU, DRAM or a GPU installed.
- USB Charger+: Allocates a set of USB ports for high power mode, offering quick charging to all BC1.1 compatible devices.  In this mode, the devices are not able to transmit data, and the port acts just like a charger.
- WiFi Go!/WiFi Engine: The WiFi tools allow users to set the PC up as an access point if they are connected via Ethernet, and also with a mobile device provides a direct screen link for mobile connection/file transfer between devices.

Designed for gaming is the GameFirst II network management software, which is actually our old friend cFosSpeed with a nice wrapper.  ASUS have written their wrapper/interaction screen to help users quickly prioritize the type of traffic through the network port.  Note that as this is general software, we are still working with the Windows Network Stack, unlike the Killer E2100 which likes to bypass the stack with priority demands.  This is more like a secondary buffer that sends commands to the Windows stack. 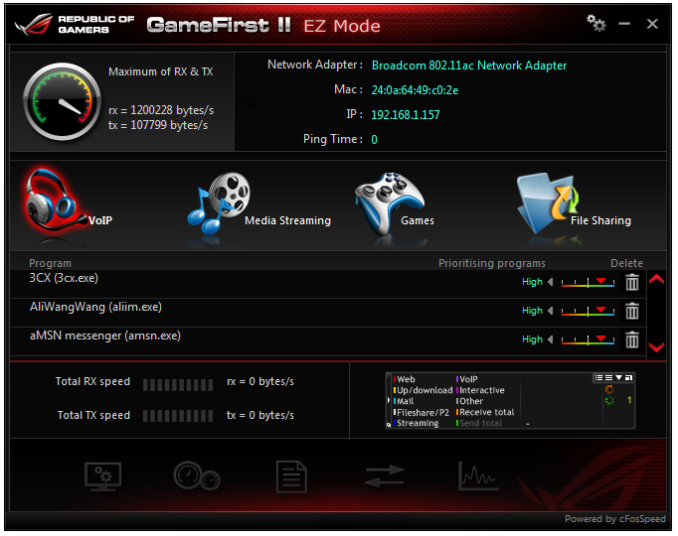 Like other cFos software derivatives, the options and menus allow for a wide array of customization and stat tracking: 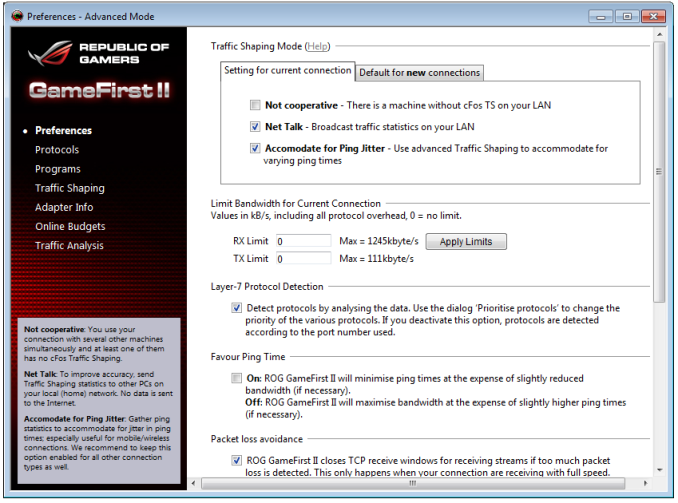 One of ASUS’ new tools for ROG motherboards is their RAMDisk software.  Despite the price of DRAM fluctuating in recent months, at one point it was cheap and did not harm a build much to pick up larger kit than originally needed.  Even my brother, who runs a single GPU gaming machine at 1080p, went with 16 GB just because it was not much harm in overall build cost.  With so much excess memory, there are several choices to use it: Multi monitor setups, a RAMCache, or a RAMDisk.  The latter partitions some of the memory off as a hard-disk with comparatively lightning fast read/write/latency.  Useful for game installs or temporary file allocation. 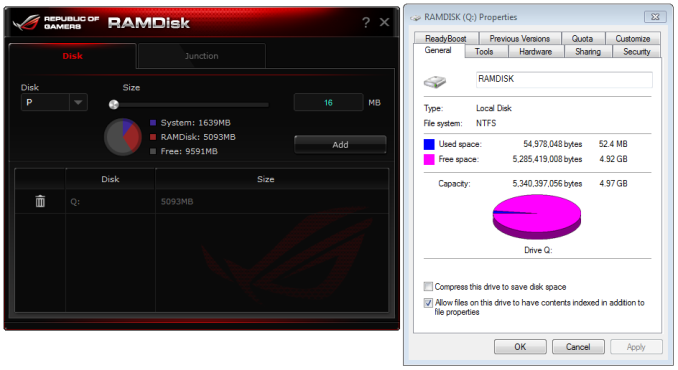 Users can select up to three quarters of their available free RAM for a RAMDisk, and the software comes free with the motherboard.  This makes me wonder, on a rather large scale, why companies like AMD have a staggered pricing plan for their RAMDisk software for different sizes of RAMDisk when it is just a skinned version of DataRAM’s software.  It would make much more sense to bundle it with their CPUs.

ASUS’s other software comes in forms we have already seen on other motherboards: an ROG themed CPU-Z: 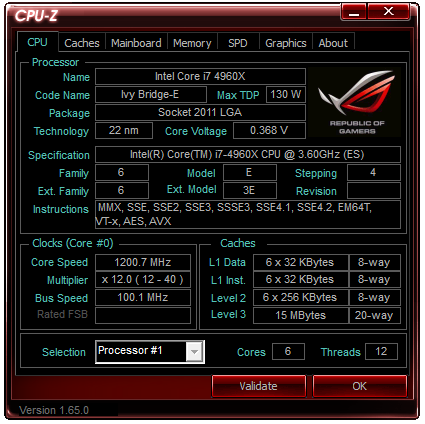 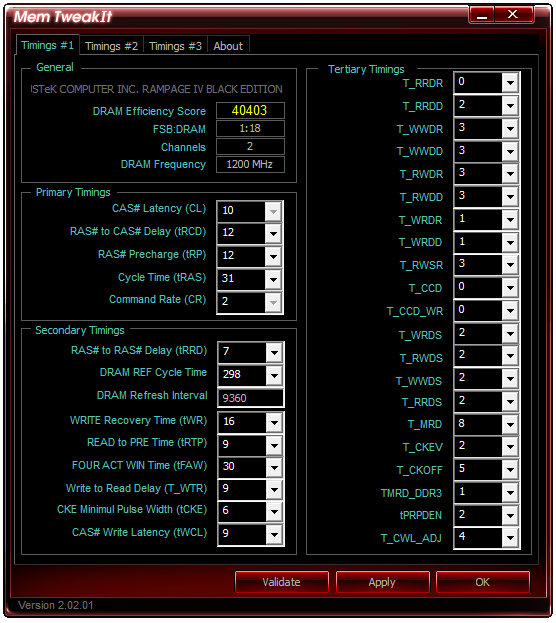 The only issue I had with the software overall was that my Driver DVD had some issues being read, and I sourced the latest version of AI Suite from the ASUS website.  The EZ Update tool should be able to pull this for us, but as usual it has never suggested an update to me even if one is available directly on the website.  This small section of the software still has issues, especially to beat MSI’s implementation.