It seems that Corsair is trying to have every case under the same series based on a similar aesthetic design. Much like the Obsidian 450D that was released two days ago (review forthcoming), which is strikingly similar to the rest of the Obsidian cases, the Graphite 760T looks like a distant cousin of the much simpler Graphite 230T. It features a balanced, slightly aggressive postmodern design, with the panels of the case engulfing the plastic front fascia and tall feet lifting the chassis several centimeters above the ground.

The Graphite 760T is being marketed as a case for advanced users but it is not targeted towards a specific group of users, such as gamers; therefore, we feel that Corsair's balanced design is perfect. The chassis of the case is made out of SECC steel but there is a lot of plastic in use. We should also note that the Arctic White version of the case obviously is not entirely white, as can be seen in our pictures; parts of the side, top and bottom panels are white but the rest of the case remains black, including the entirety of the front fascia. 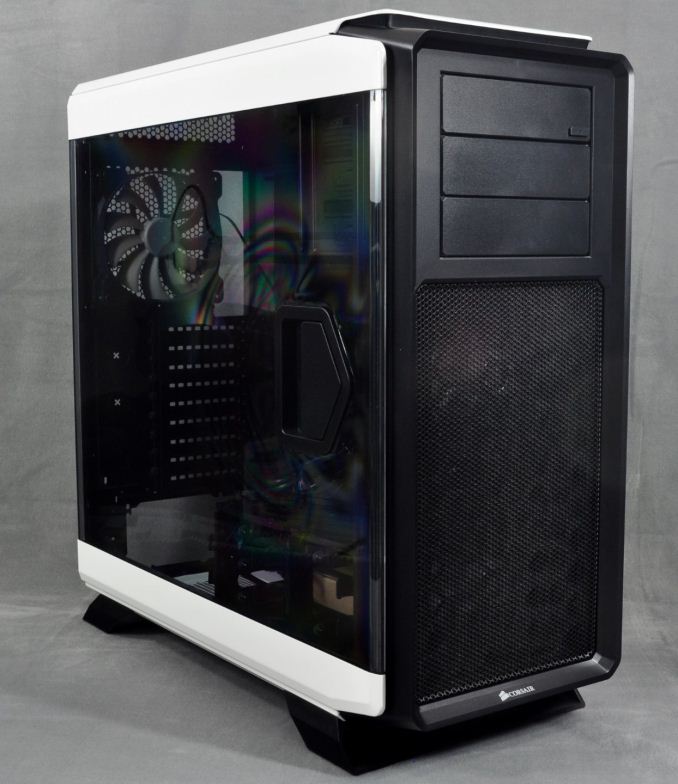 The front I/O ports can be found nicely arranged at the top side of the front fascia. There are three 5.25" bays, one of which has a cover for a typical optical drive. Corsair most likely felt that three bays is a good choice because one can be used for an optical drive leaving two for a large fan controller or a similar device. The rest of the faceplate is covered by a metallic mesh filter that can be removed by simply applying a little pressure at the top two corners simultaneously (preferably while the system is not powered on). It conceals the two intake 140mm fans; both stock intake fans feature white lighting that, due to the positioning and nature of the LED lights, is distributed unevenly across the meshed part of the fascia.

The side panels of the Graphite 760T are perhaps its most notable feature. Instead of using typical metallic side covers, Corsair installed latched, hinged doors that open backwards. Most of the surface of the left side panel is transparent acrylic (note again that the 730T lacks the window), while the right side panel is glossy black. Both doors are plastic, a good thing considering their size and thickness, as metallic doors would probably make the weight of the already heavy case unbearable.

A plastic white cover is magnetically attached on the metallic frame of the top panel. Removing it is a simple matter, as it can be simply pulled off, revealing a large meshed surface. While the cover is attached, the mesh is practically sealed and it has no part in cooling the case. Up to three 120mm or 140mm fans can be installed there if the cover is removed, or a liquid cooling radiator up to 360mm long and 140mm wide (so you can choose between 3x120mm or 2x140mm).

The bottom panel of the chassis also is white, in order to match the theme of the case, but the tall plastic legs of the case are black. There is a filter under the PSU intake fan that can be removed for cleaning by simply pulling it off from the back of the case. The rear part of the Graphite 760T is black as well, with a perforated area near the top and perforated expansion card covers. There are two round holes for liquid cooling hoses and/or cables but without rubber grommets; they come with solid metal covers that can be permanently punched out. Although the use of an external liquid cooling kit with a case this size is rather uncommon, the installation of two rubber grommets should definitely be standard on a $189 case.