Corsair painted the chassis of the RM1000 a matte black color, as the company usually does with their PSUs. Aesthetic improvements include chamfered edges and decorative stickers on the sides of the power supply, as well as parallel, embossed ridges aligned with the fan's finger guard design. Note that the chassis of the Corsair RM1000 is 180mm long, which is significantly longer than typical ATX PSUs. This could be a problem if the PSU is to be installed inside a small or low-cost case, but that seems unlikely considering the class and power output of the unit. Regardless, you'll want to make sure your case is able to accommodate such a large PSU. 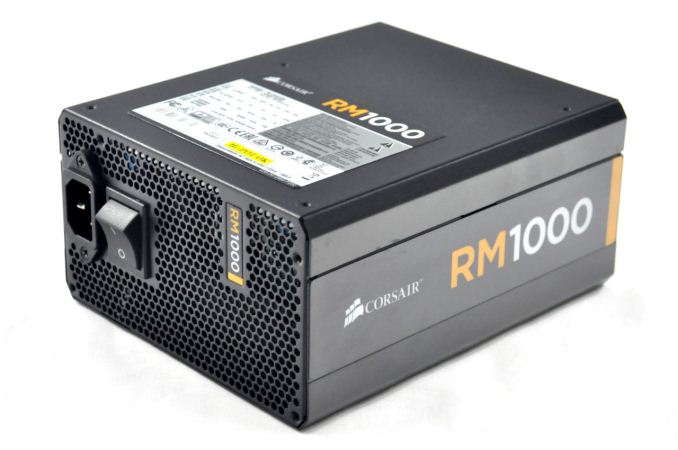 Corsair placed the sticker with the specifications of the PSU on the top of the chassis as the front of the chassis is littered with the connectors for the modular cables and the sides of the Corsair and RM1000 logos. The CPU and PCI-E cables share the same style connectors, the split 10-14 pin connector is for the ATX cable and the smaller connectors are for SATA/Molex cables. There is also a small connector for the Corsair Link interface. We should note that the RM1000 sports the "Basic" Corsair Link interface, which allows you to monitor some basic figures (e.g. fan speed and the 12V line amperage), but it is far less interesting than the complete monitoring capabilities of their top-tier digital models.

The 135mm fan responsible for the cooling of the RM1000 is a Corsair NR135L fan. As even the UL certification number points back to Corsair, this technically is Corsair's own unique product and not a re-branded fan, though some Chinese factory still makes it for them. It has a rifle bearing and a maximum speed of about 1600 RPM. At this point we should note that the RM1000 features a "zero-RPM fan mode", meaning that the fan will not start until the load reaches a significant load (about 40%). 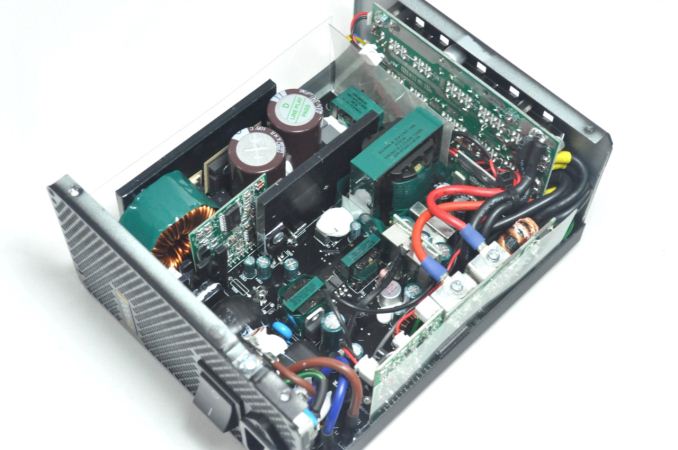 As we noted in the introduction, the OEM behind the RM1000 is Channel Well Technologies (CWT). The first thing that you'll notice about the design is not some special feature or fancy component but the heatsinks, which are preposterously small for a 1000W unit that is designed for low-noise operation and features a fanless mode. In fact, the heatsinks not only are small but also are nothing more than simple quadrangular metallic slabs, with minimal heat dissipation surface. Apparently, Corsair has placed a lot of faith on CWT's design and efficiency, especially considering the five year warranty they provide.

The 400V / 390 μF APFC capacitors are high quality parts supplied by Nippon Chemi-Con. The rest of the electrolytic capacitors are supplied by TAICON and CapXon, Taiwanese companies, with the exception of a stray small Nippon Chemi-Con on the connector's PCB. Although TAICON is not very well known, it is an old company and the quality of their products is considered to be on par with their (similarly priced) Japanese counterparts. CapXon is a very well known company and makes above-average quality products, but they've also had a couple of failed series in the past that rightfully reduced the reputation of the company amongst enthusiasts.

The build quality of the RM1000 is excellent overall. The soldering job is very good, with zero bad joints or burnings, only a few spots where the assembler was too generous with the solder. For mechanical cohesion, the manufacturer used a lot of glue to secure most components. An extra application of lacquer and glue can be seen on the inductors, most likely to minimize the chance of vibration-generated noise (also known as "coil whine").