The Cougar 600K ships inside a large, very well designed cardboard box. The artwork theme is serious and mainly focused on a picture of the keyboard itself. Inside the box, the keyboard is very well protected under thick Styrofoam pieces. 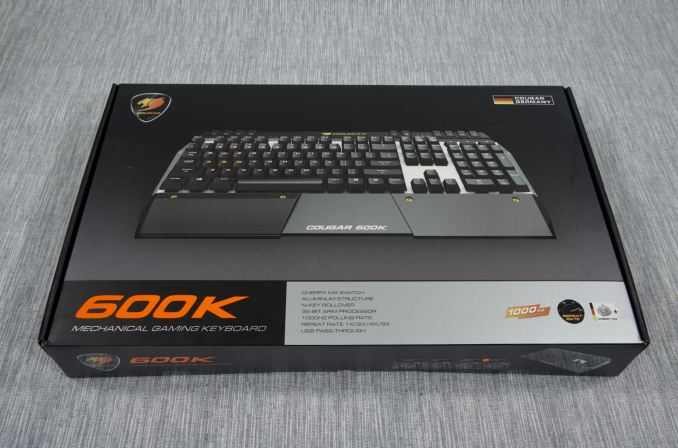 Aesthetically, the Cougar 600K shares the same impressive design with the top-tier 700K. It is a futuristic design, with enlarged keycap characters painted on top of the keys, which are in turn secured directly on an aluminum chassis that otherwise lacks a plastic frame surrounding them. Note however that it is not entirely made out of aluminum, as the top-half of the body is a brushed aluminum board but the rest of the keyboard is plastic. Cougar claims that the 600K is a "lightweight" keyboard but, considering that it tips the scales at 1160g, we beg to differ. It definitely is not lightweight nor designed for easy transportation. 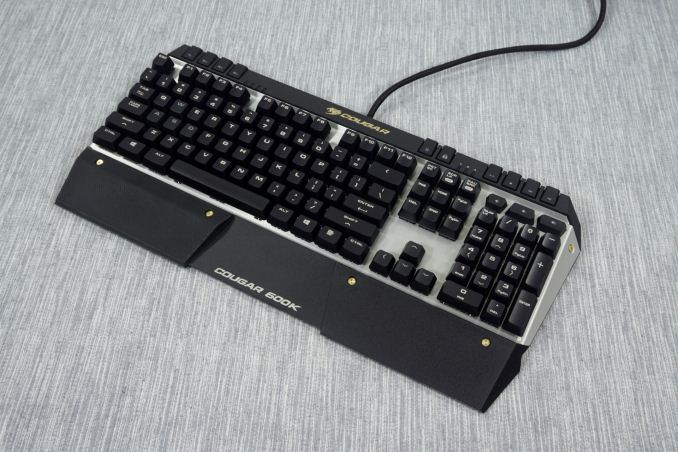 One of the unique features of this keyboard is the secondary wrist rest that magnetically attaches onto the left side of the full-size wrist rest. By raising the palm's rest point by these few millimeters, WASD or TAB-1234 gaming becomes significantly more comfortable. The secondary wrist rest also has a textured, non-slip surface. 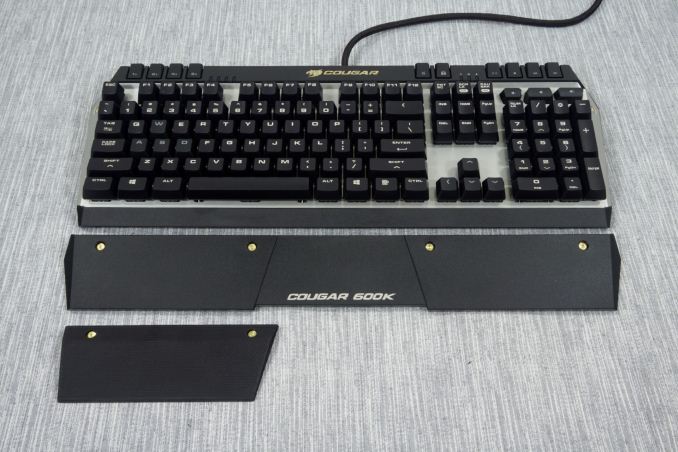 Cougar is using Cherry's MX switches for every one of the 104 standard keys of the 600K. The only keys that are not using Cherry's products are the three audio volume keys and the flat keys at the top of the keyboard. Cougar can supply the 600K and any of the most popular Cherry MX switches (Black, Blue, Red or Brown).

Our sample came with Cherry MX Blue switches, which are known to have audible and tactile feedback (i.e. they are noisy and mostly suitable for typists). Cross-type supports can be found under the larger keys, preventing wobbling and distributing the actuation force more evenly, meaning that the key will require about the same actuation force regardless of which part of the key is pressed. 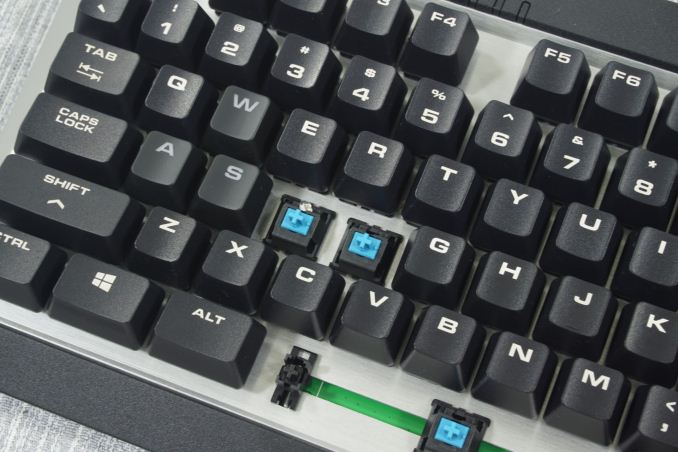 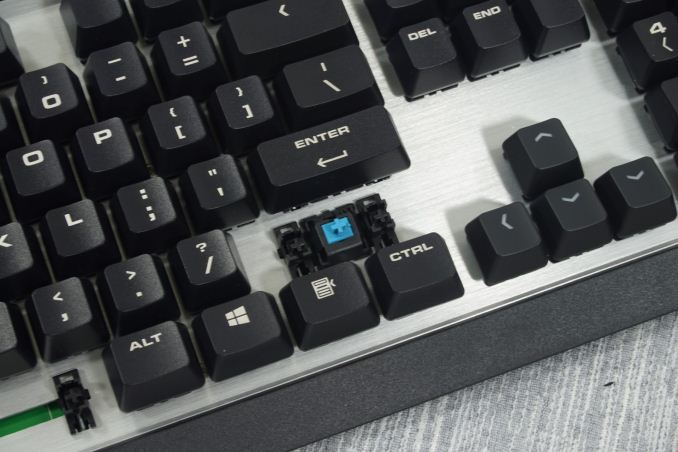 Four flat keys at the top left of the keyboard allow the user to switch between four different key repeat rates. The higher the repeat rate, the faster a key will repeatedly register if kept pressed. Six of these flat keys can also be found to the top right side of the keyboard as well. One controls the intensity of the backlighting (of the few keys that are actually backlit), one locks the Windows key and four provide basic media controls. 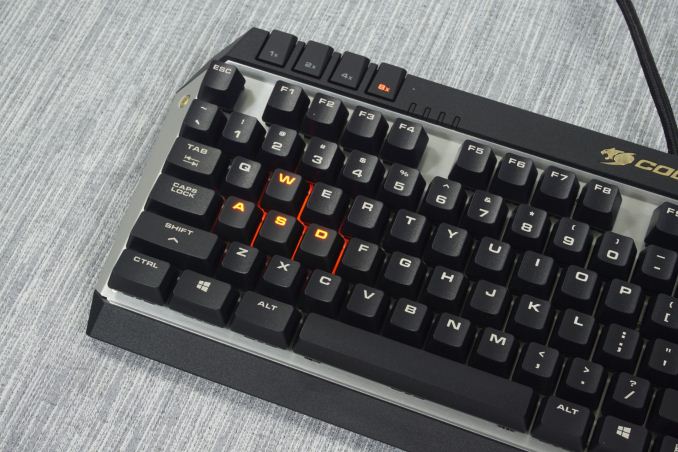 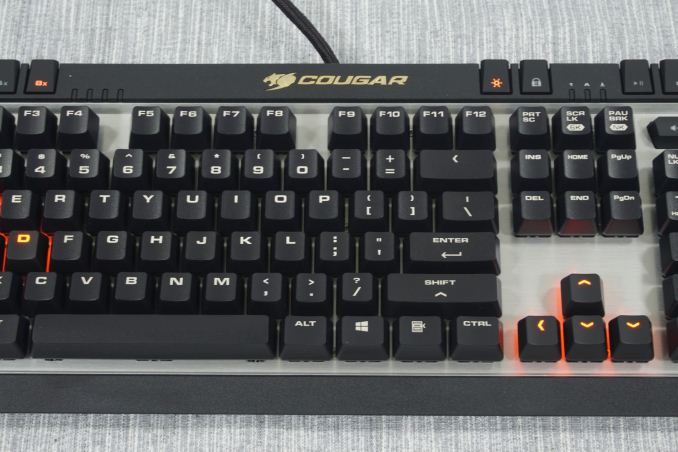 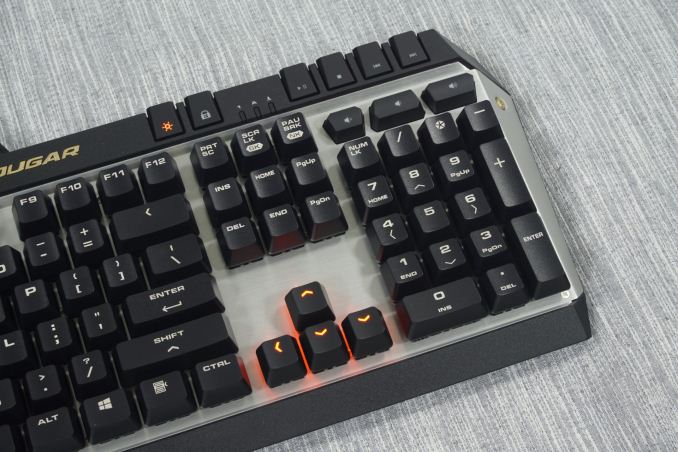 In between these four keys and the numpad are three tall plastic keys that provide sound volume control. These are not as convenient as a volume wheel but they get the job done. They are however notably shorter than the rest of the keys, so depending on the position of the keyboard, the user might frequently be pressing the numpad's top row keys instead of them.

One more option, that of switching between six and N key rollover modes, can be accessed by pressing the Windows key plus the SCR LK or Pause button. 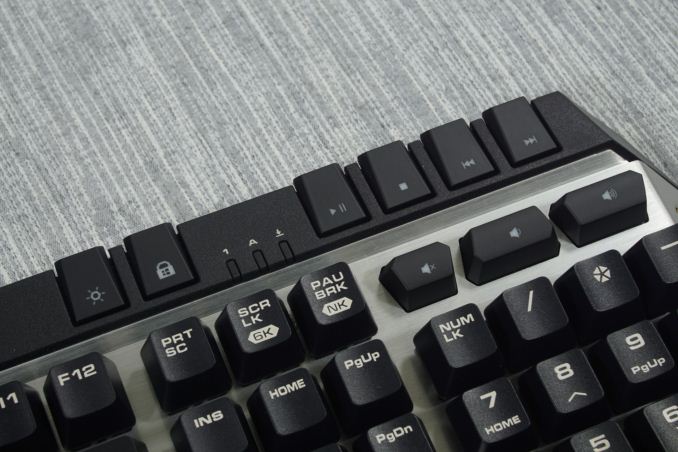 At the back of the keyboard, we found a single USB port near its right side. Having a USB port there can be very convenient for wired mice or to users whose the computer is not easily accessible, such as under an office desk or otherwise hidden. There is nothing of note at the bottom side of the keyboard, only anti-skid pads and two basic height adjustment feet. 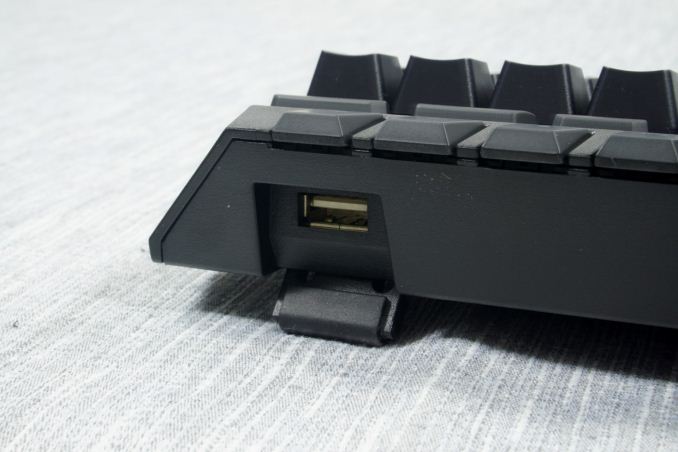 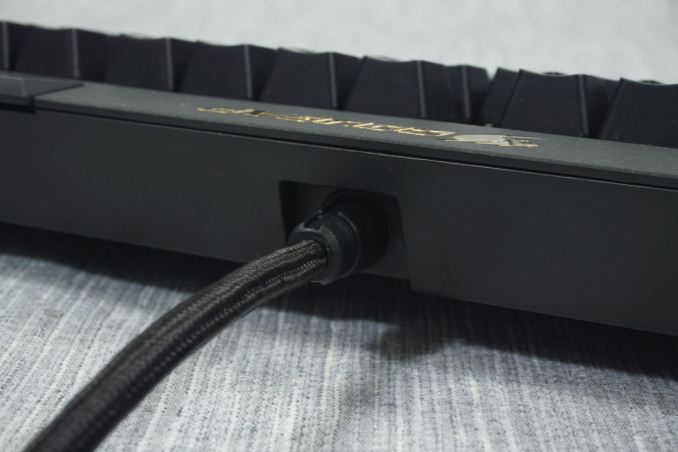 Ultimately, judging from looks and key layout alone, it would be easy to think that the 700K and 600K are almost identical, as even up close the two keyboards look almost exactly alike. What little difference there is between the keyboards amounts to the fact that that the 600K has no macro keys located to the left, and the Space Bar is not split. Looks can be deceiving however, and once you go under the hood it becomes much more obvious how these two keyboards are different. Although it looks almost exactly alike the 700K, the 600K lacks almost every single advanced feature that the 700K had, with the differences being far more important than just some dedicated macro keys.

To begin with, the backlighting of the Cougar 600K is limited to just eight main keys. The W, A, S, D and the arrow keys are the only keys with a LED beneath them. The difference can be spotted almost instantly once you know what to look for, as the characters of these keys are semi-transparent while every other keycap character is solid. This "selective" backlighting will appear very odd to everyone not using these specific sets of keys. As even FPS gamers are trending towards the use of the ESDF keys instead, offering selective lighting on just the WASD keys was definitely not a great design choice.

Furthermore, the Cougar 600K lacks any kind of programmability. More than just a few macro keys are missing; none of the keys can be reprogrammed to perform any advanced function or even to change the layout. Simply put, in exchange for a lower price tag the Cougar 600K becomes a typical, standard layout keyboard and the user cannot do anything to change that.

In order to test the quality and consistency of a keyboard, we are using a texture analyser that is programmed to measure and display the actuation force of the standard keyboard keys. By measuring the actuation force of every key, the quality and consistency of the keyboard can be quantified. It can also reveal design issues, such as the larger keys being far softer to press than the main keys of the keyboard. The actuation force is measured in Centinewton (Cn). Some companies use another figure, gram-force (gf). The conversion formula is 1 Cn = 1.02 gf (i.e. they are about the same). A high quality keyboard should be as consistent as possible, with an average actuation force as near to the manufacturer's specs as possible and a disparity of less than ±10%. Greater differences are likely to be perceptible by users.

The machine we use for our testing is accurate enough to provide readings with a resolution of 0.1 Cn. For wider keys (e.g. Enter, Space Bar, etc.), the measurement is taking place at the center of the key, right above the switch. Note that large keys generally have a lower actuation force even if the actuation point is at the dead center of the key. This is natural, as the size and weight of the keycap reduces the required actuation force. For this reason, we do display the force required to actuate every key but we only use the results of the typical sized keys for our consistency calculations. Still, very low figures on medium sized keys, such as the Shift and Enter keys reveal design issues and can easily be perceptible by the user.

In terms of quality and consistency, the Cougar 600K performed just as well as we expected a keyboard with Cherry MX switches to. The Cherry MX Blue switch has an actuation force rating of 50 Cn and the average of the Cougar 600K was 49.3Cn, with a disparity of ± 6.89%. These are small force differences and would be imperceptible by any user. Naturally, as with most mechanical keyboards that use the same switch for the Space Bar key, it requires much less force than the rest of the keys, as the size of the keycap greatly reduces the required force. The left Shift key had a little low reading as well, but that is also due to the size of the keycap and definitely not due to low quality switches.