For those in the PC industry, it has been clear to see that MSI’s gaming laptop strategy is quite rigorous. The net is cast far and wide, covering high end and mid-range, but also investing in new technologies which may or may not be part of the future. Brett recently reviewed the 18.4-inch 4.5 kg behemoth in the MSI GT80 Titan, featuring two GTX 980M GPUs in SLI with a Broadwell CPU, which is one such direction that MSI is taking. We saw a few models from MSI at CES, but for Computex the range is expanding. We’ve chosen a few of the most interesting models here.

At CES, MSI announced the GS30 Shadow gaming laptop, a seemingly run-of-the-mill 13.3-inch Crystal Well based Haswell with eDRAM, no discrete graphics card, 16GB of DRAM and RAID SSD storage. We reported that it looked half decent as a mobile gaming device, but the interesting element at the time came via the external dock. The external dock allowed the system to run with a full discrete graphics card, supporting up to 450W. The GS30 docked into this directly with PCIe 3.0 x16 from the CPU, allowing a full bandwidth implementation, and the dock would cost around $200 sans GPU. In fact after Computex I visited Singapore, and in the Funan DigitaLife mall there was one retailer who had the GS30 + dock on display. I asked the shop owner about sales, and he said out of the five he received in stock, he had sold three (with the dock) in six weeks which is an interesting number.

There were some issues with the dock that we noted at the time. The dock itself was not particularly user friendly in standard laptop circumstances – due to the shoebox-like shape it meant that the laptop was a good six-plus inches off of the desk and not suitable for typing. The dock was also not hot-swappable, meaning that the system had to be restarted in use. The display of the laptop was also not able to use the discrete card, meaning that the user had to have an external display anyway, making the laptop little more than a mini-PC. A lot of this changes with version 2. 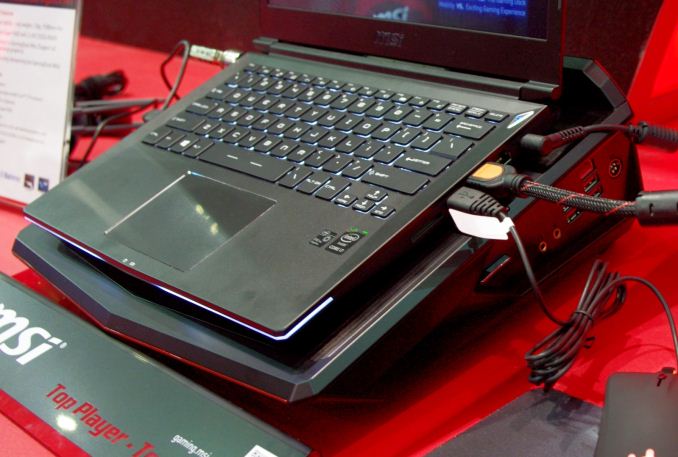 The dock goes angular, allowing for full use at a desk with minimal effort. As we can see on this side, the dock also comes with additional IO ports such as USB, Ethernet and a card reader. This improves the usage of the device considerably, either on or off of the dock. The new design, with a Broadwell-H based Iris Pro GS30, will also allow the display of the laptop to use the graphics power under the hood. This is done more through a video-out from the GPU to a video-in to the laptop rather than directly changing the GPU at the software level from integrated to discrete. Either way, there’s no need to also have an external monitor. 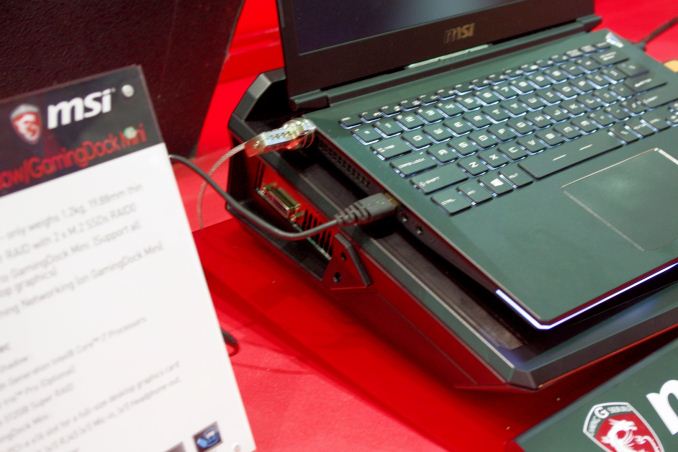 Hot swapping should be as simple as disconnecting the video-in and changing the output monitor via hotkeys, allowing users to seamlessly switch between outputs. The dock will be able to take a GPU up to 330W and the deeper dock might allow for some of the larger AIB manufacturer designs. 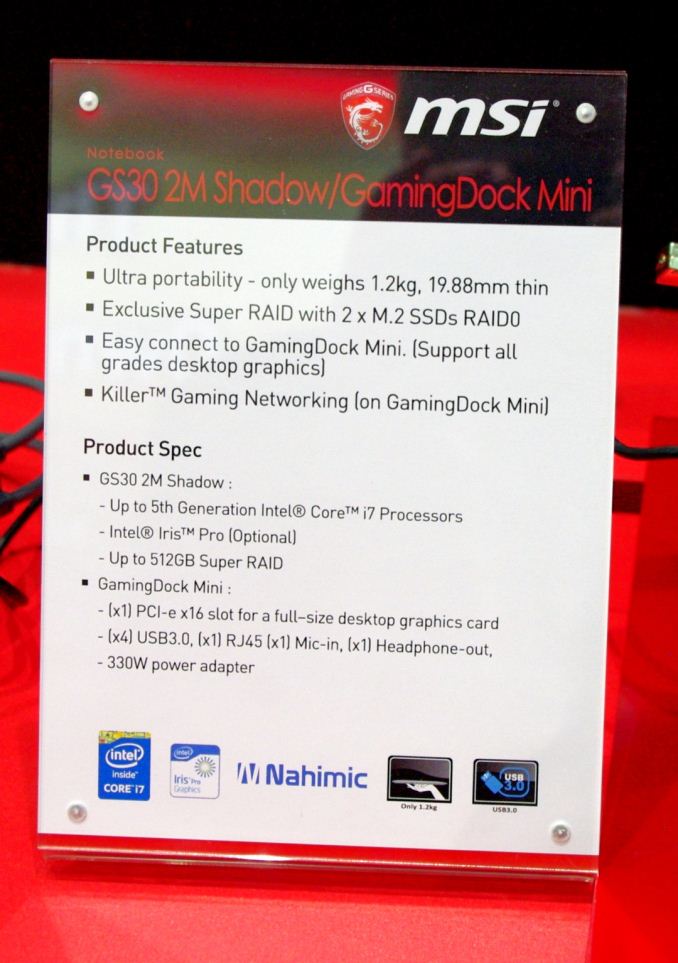 Standard specifications apply here – MSI’s SuperRAID and Killer are base add-ins for them at this point, along with Nahimic Audio. As always, MSI is finalizing the design and we should see it on the market in Q3, with exact configurations determined by the retailer. Hopefully MSI hasn’t produced too many of the original versions, because now that this is on the horizon I suspect most review websites will be suggesting to hold out for version 2.

To complement the discrete graphics technology, MSI had a new style of laptop on display in order to gauge opinion. As the sub-title suggests, we have a GT72 laptop with eye tracking technology: 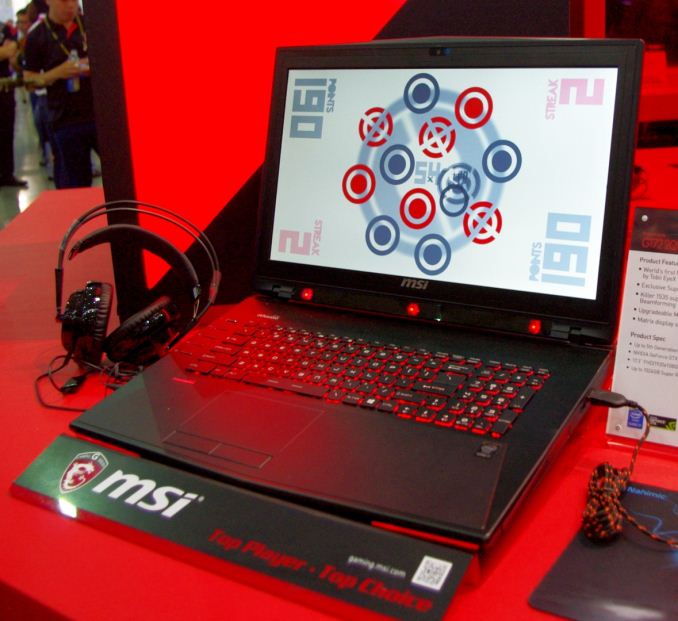 At the hinge we see three red lights which are part of the technology designed by Tobii. The software comes with a quick calibration tool that takes a minute to perform, and thereafter a user can move their eyes to parts of the screen they want to move the mouse to. Note that this function doesn’t click (for example in menus), but the demo provided showed Assassin’s Creed using the technology to adjust where the camera was pointing: 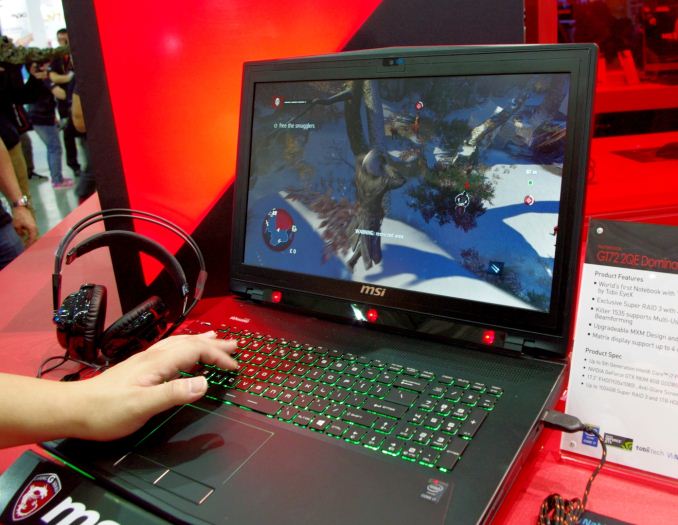 So in this case the WASD keys were for moving the character, and the technology tracked the eyes as to where to look in the game. Even with only 30 seconds playing with the technology, in this environment it seemed a little tough to get to grips with, especially if you looked down at the keyboard or at part of the HUD, but I presume 30 seconds is not enough to get used to it. I did however do the calibration tool, and played the game in the first image which involved moving my eyes to get the grey targets. It was very intuitive, and I scored well at least. 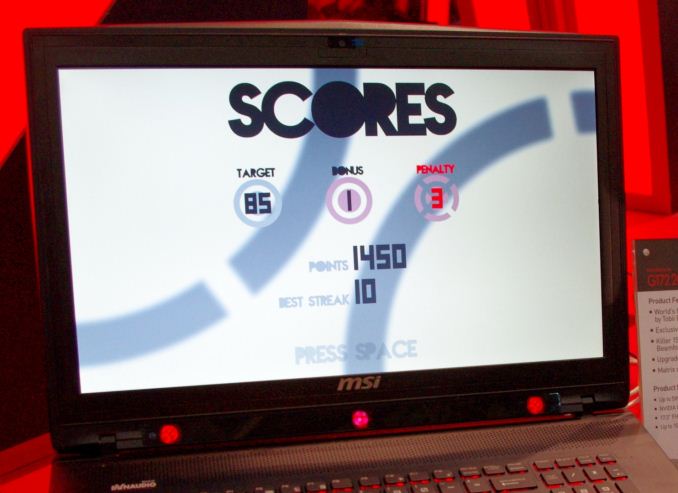 Ultimately I think this is the sort of game where eye-tracking might be more beneficial – indie type games from the Windows Store. These sorts of games would be more preferable to a low-end device rather than a GT72, but ultimately like most manufacturers the goal of new technology is to offer it to the high end first, see uptake, and then filter it down. Depending on the cost, I could see it being brought down to desktop replacement/gaming type models, although something a bit smaller might be a stretch due to added cost. 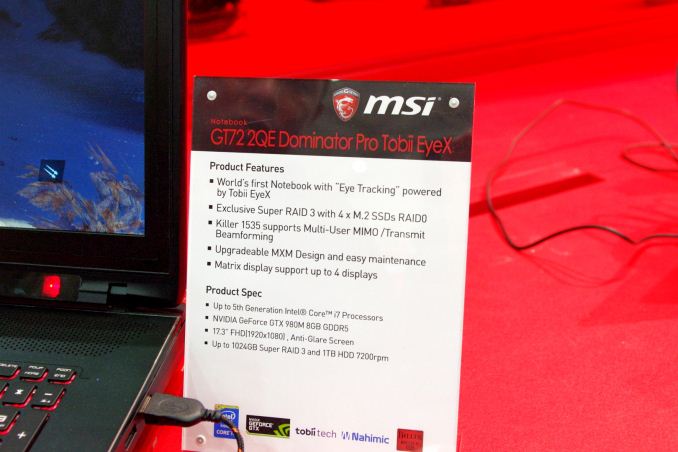 Just before Computex it was announced by NVIDIA that G-Sync on mobile devices was now supported, and that allowed the laptop manufacturers to show off their designs. Naturally MSI was in this mix, and similar to the Tobii model, we get a GT72 variant showing Mobile G-Sync: 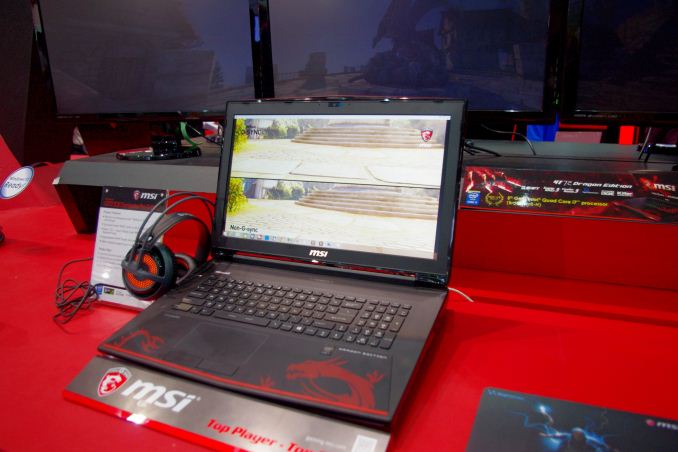 What became interesting was the discussion around G-Sync, because as it turns out Optimus (the ability to adjust from discrete graphics to integrated graphics dynamically) will not work with G-Sync at this time. In order to counter this, MSI has added a GPU button to the GT72 in use: 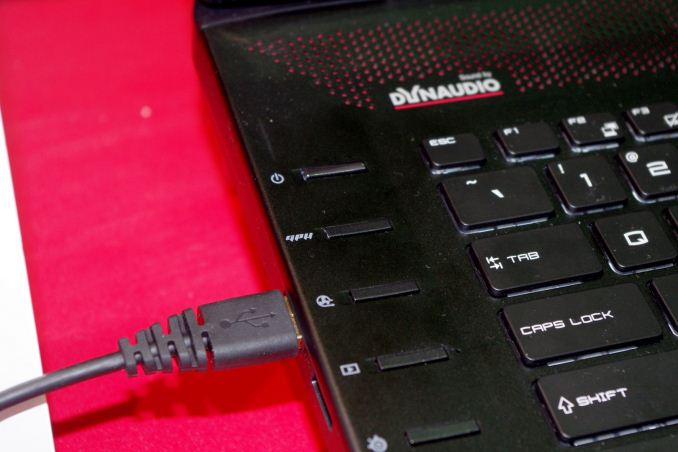 This allows the GPU to switch from integrated to discrete and vice versa, though if I remember correctly the system requires a restart in-between. G-Sync should still work in both modes, but turning off the discrete card should aid battery life significantly when in remote locations. For gaming there is also a turbo mode for the fans, exchanging noise for cooling. With these devices, especially on location, most gaming is performed with headphones anyway so having this option helps keep those temperatures down.

Part of MSI’s Computex event was done in collaboration with Square Enix for the PC release of Final Fantasy Type-0. As an avid Final Fantasy fan it was perhaps a bit of a shock to see Square Enix and MSI collaborate on a joint launch, but along with the game MSI was showing off a full-red GS60 (as well as a silver GS70). 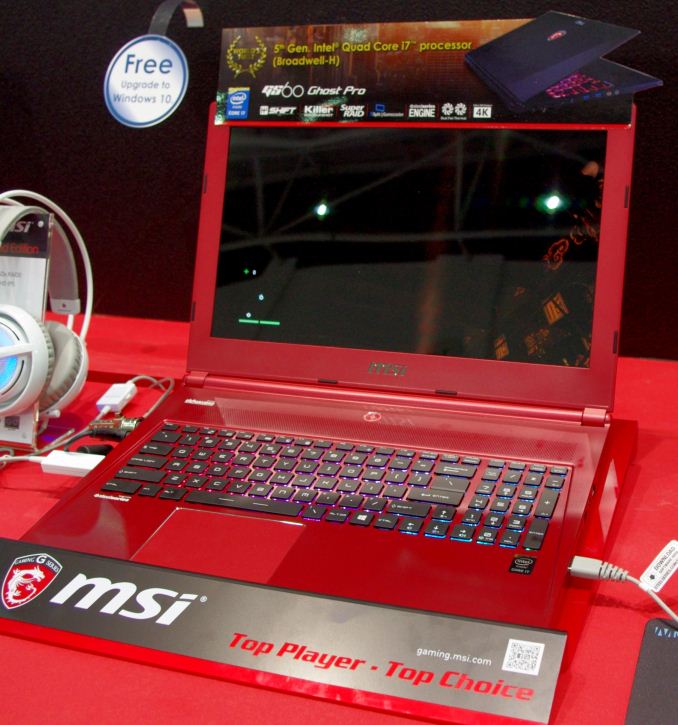 Given the vast array of black laptops we see (or blue ones from HP and color choice ones from Dell), it was good to see something a little different in a premium chassis with the gaming vernacular. Due to most gaming keyboard backlights being red, MSI takes a different tack here and we get a white/blue-ish result. Personally I think it looks better than average, although perhaps something to rival the Dell XPS13 for bezel design would be preferable. That being said, I can’t wait for Type-0 to get to Steam – I never played the PSP version, and I’m currently going through the older ones on Steam 10-15 years after I first completed them with higher resolution texture packs. Final Fantasy 8’s story finally makes sense now, because it certainly didn’t when I was 14!