Producing concept boards is common in the automotive industry.  Every year, companies such as Ford, Audi, Jaguar or Volkswagen will produce a concept as an indication of 'this is what we could do if we wanted' or 'this is an idea, what do you think?'.  In the motherboard industry, seeing concept motherboards on display is something of an oddity.  However, innovation in the motherboard landscape doesn't come very often, so seeing ASUS go forth and provide a pair of concept boards was an interesting exercise.  Last year ASUS teased us with the Danshui Bay concept board, utilising 1366 and 2011 sockets on the same product - this year, the concept is a little more realistic.

Meet Zeus.  This motherboard is slightly mad.  Take a regular X79 chipset motherboard, but do away with all the PCIe lanes.  Then in their place, add two GPUs on the PCB itself, cover with heatsink, done.   Even though in the CPU market we are seeing consolidation of components, the very nature of computer building is that it is component driven - take the memory, the CPU, the motherboard and the GPU(s) you want and fit together.  The component market fluctuates in price, so this component philosophy works well for users.  But applying this concept to motherboards in a serious manner gives Zeus: 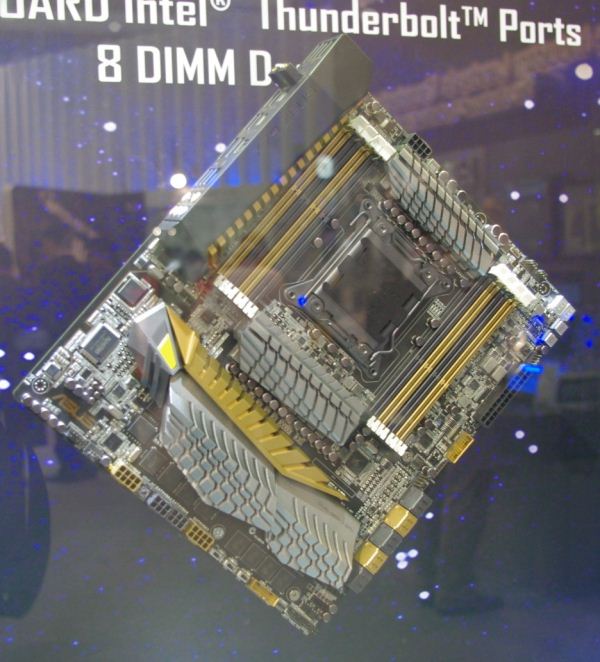 Most of the time, concepts are not put into production.  I have a distinct feeling that while Zeus may be a reasonable idea, it wouldn't be coming to market.

Also on display was the Wolverine.  The brief for the engineers on this motherboard was 'how many power phases can you put on a board?'.  The answer from ASUS was 40, which suggests 8x2x2 multiplexing + 8 for other things: 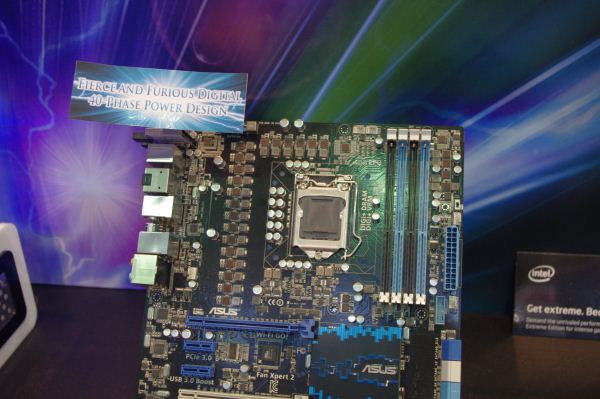 Similar to the Zeus, don't expect the Wolverine on sale any time soon.  40 phases is almost ridiculous and has no serious benefit to any user.