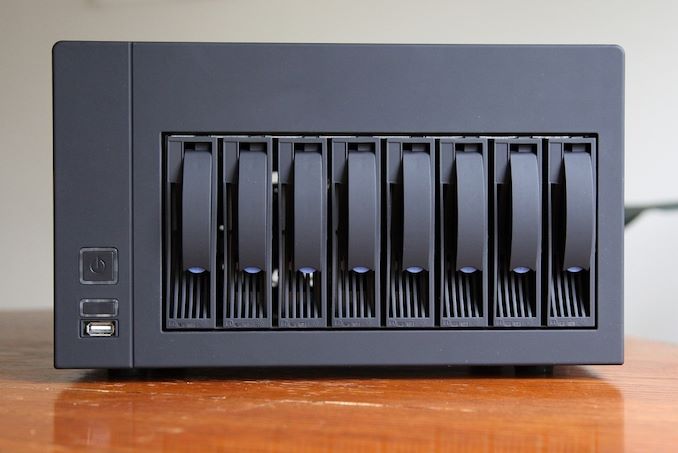 The network-attached storage (NAS) vendors had a relatively quiet presence at CES 2020 compared to what we used to see in earlier years. We have a few announcements and show presence coverage from a couple of vendors to cover, but, a commentary on the current stage of the NAS market is first required to set the stage.

Where is the Network-Attached Storage Market Headed?

As an active follower of the network-attached storage (NAS) market and a media analyst covering CES for more than a decade, the change in the approach of the NAS vendors to the show over time has been interesting to observe. At a higher level, it also shows the direction in which the NAS market is headed. In the early 2010s, the cloud concept was still in its infancy and over-the-top (OTT) streaming was just taking off. However, the rise of smartphones and the associated user-generated content meant that consumers suddenly had a significant amount of data at home that needed access in a centralized manner. A number of vendors attempted to capitalize on this home consumer demand by releasing NAS units catering specifically to this market segment. Fast forward to 2020, and a number of things have changed on the home consumer front:

The factors mentioned above have led to the market for consumer-focused NAS devices experiencing little to no growth in the past couple of years. While the underlying data storage explosion thesis remains unchanged. However, the place where the data gets stored as well as the type of customers who want fast, reliable, and centralized storage with a focus on privacy have become skewed. From the perspective of NAS vendors, the primary growth area is in small businesses and enterprises. We will be seeing hardware and software features focusing on various segments of that market moving forward. For example, QNAP already has Thunderbolt 3-equipped NAS units for enterprises involved in media production.

Where does that leave the consumer NAS models? Since the area is not a growing segment, we will see second tier vendors such as ZyXEL (which last released new NAS units back in 2015) completely exit the market. We also believe that Netgear is completely dropping the home-consumer oriented models in the ReadyNAS lineup. Some vendors (such as Iomega / LenovoEMC) have lso completely exited the NAS market despite having had SMB- and enterprise-focused units in their lineup. Moving forward, the retail crowd will be served by units such as the Western Digital My Cloud Home / Home Duo / Expert / Pro series. Given the huge hard drive capacities, the retail crowd hardly needs more than four bays. This segment is also least bothered by aspects such as SSD caching. Synology, QNAP, and Asustor will release updated models of their 2-bay and 4-bay NAS units every year or two, but the main focus will be on their SMB offerings. On the software side, we believe that NAS apps such as Plex, Twonky Media Server etc. will slowly turn into abandonware. Prosumers and enthusiasts among the home consumers will end up purchasing low- and mid-range SMB NAS units for their privacy-focused centralized data storage needs.

The effects of the above trends has already been seen at CES over the last few years. In the early 2010s, Synology used to have a presence at one of the press events (Pepcom or ShowStoppers) and also a booth in the main show floor. QNAP used to have either a booth or a suite at one of the hotels. Asustor used to share a suite with Asus. At CES 2020, Synology had a fly-in and fly-out presence at Pepcom along with a 4-bay NAS announcement. QNAP did have a booth and a number of announcements, but the focus was mostly on business features. Asustor announced a new business NAS unit, but didn't have any presence at the show. Netgear didn't have any ReadyNAS units on display in their suite. We did have some upcoming / second-tier vendors such as Terramster displaying their wares at the show. Vendors such as QNAP, Synology, and Asustor have begun organizing their own annual user conferences to announce new products and software features. Additionally, other business conferences focused on virtualization, security etc. are turning out to be better events for these NAS vendors. Overall, CES is no longer an important show for the NAS market. Having said that, the rest of this piece captures some of the demonstrations and announcements made in the NAS space as part of CES 2020.

In H2 2019, Asustor had launched the Lockerstor 8 (AS6508T) and Locketstor 10 (AS6510T) tower form-factor NAS units along with demonstrations of the AS-T10G and AS-U2.5G 10Gb and 2.5Gb network adapters. They had also demonstrated updates to various native apps in the Asustor Data Manager (ADM) OS. These Denverton (Atom C3538) units came with dual Intel-based 10GBASE-T ports and dual Realtek-based 2.5G RJ-45 ports along with two M.2 NVMe SSD slots for caching purposes. Priced at $999 (AS6508T) and $1149 (AS6510T), they are cost-effective solutions for SMBs. 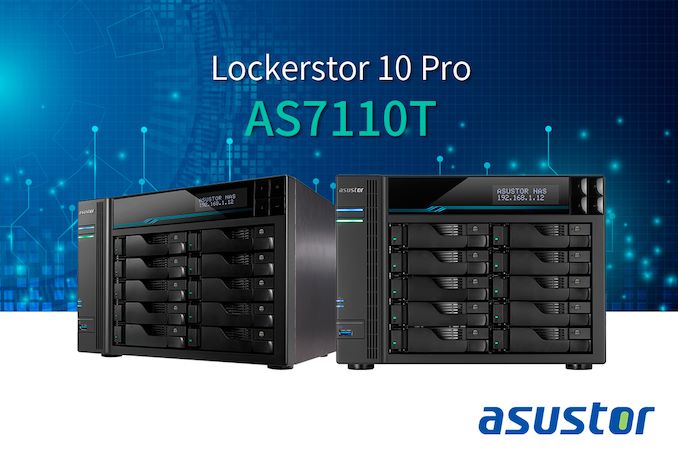 The Lockerstor 10 Pro (AS7110T) uses an Intel Xeon quad-core processor with DDR4 ECC memory. This 10-bay NAS comes with a 10Gb port as well as three 2.5Gb ports, has dual M.2 NVMe / SHCI SSD slots, and two USB 3.2 Gen 2 (10 Gbps) ports. Availability is slated for Q1 2020. We do not have any additional details as yet, but, it seems strange that the Lockerstor 8 and 10 come with dual 10Gb ports, while the Lockerstor 10 Pro has got to make do with just one. We have reached out to Asustor for further comments.

QNAP has been regularly releasing updates to their QTS and also announcing new hardware models throughout the year. As part of CES 2020, they announced the TS-251D (2-bay single-gigabit NAS featuring the Intel Celeron J4005, with a PCIe 2.0 x4 expansion slot for either additional M.2 SSDs or NBASE-T ports up to 10 Gb or USB 3.1 Gen 2 ports) and the TS-230 (2-bay single-gigabit NAS featuring a Realtek RTD1296 quad-core Cortex A53-based SoC and 2GB of DDR4 RAM) for home consumers.

QNAP also launched the VS-8348 VioStor NVR NAS with a Core i5-8400T and QVR Pro native app for SMB video surveillance recording needs. The company has also been focusing on AI solutions. As part of this, they are adding face recognition to their QVR Pro motion search functionality. The same technology is being demonstrated with the QVR Face to monitor staff attendance in office environments, and digital signage products. Another AI application is their KoiMeeter video conferencing solution that can provide audio transcription and real-time translation in meetings. The QuWAN QoS features helps optimize network bandwidth for unhindered meetings. The company has also been making a big push in the network infrastructure space with their Guardian switches. The QGD-1602P was the new product being demonstrated in this segment. An update to the existing QGD-1600P, it integrates 10G SFP+ ports and has a 370W total PoE budget. It can also run the QTS operating system. The QuCPE Edge Computing Server was also being displayed at CES 2020.

Synology announced the 4-bay DS420j NAS at CES 2020, though the details of the unit have been public for a few months now. It is based on the same Realtek RTD1296 used by QNAP in its TS-230 unit. The DS420j accommodates two extra bays compared to that unit and comes with 1GB of RAM . There is a single gigabit LAN port and two USB 3.0 ports in the unit. The unit supports the ext4 filesystem only for the internal volume. 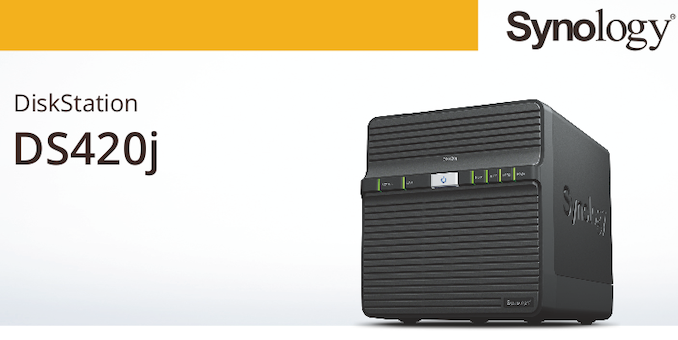 Synology is also promising new features in their updates to the Synology DSM over the course of 2020, but was silent on the details. We look forward to hearing about the new features shortly. On the business / enterprise side, Synology also announced the availability of the SA3600, a 12-bay Xeon-D 1567-based NAS with SATA / SAS support, two 10GB BASE-T ports, and four gigabit LAN ports. The 2U rackmount NAS also comes with two PCIe 3.0 x8 slots and can support both btrfs and ext4 for the internal volume. They key feature of the SA3600 is the expandability offered with the help of the 12- and 24-bay RX1217sas and RX2417sas expansion units. The maximum number of supported drive bays is 180.

Terramaster started off as a direct-attached storage (DAS) manufacturer. We had reviewed one of their offerings back in 2017. Recently, they have started a push on the NAS front too, with products targeting a wide range of customers ranging from home consumers to enterprises. The products on display at CES 2020 were actually the ones launched last year, but they did provide insight into the breadt of their offerings. 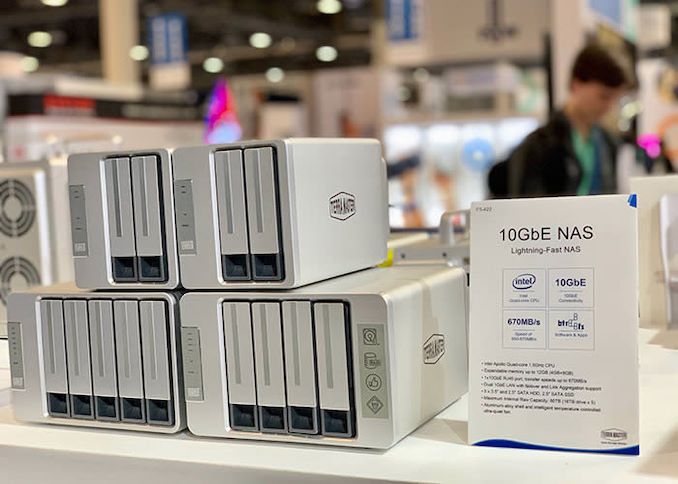 The key product from Terramaster, in our opinion, is the surprisingly affordable F5-422. At $570 for a 10GBASE-T Apollo Lake x86-based 5-bay unit supporting btrfs, it doesn't break the bank. However, the platform holds back the maximum speeds to around 650 MBps over the 10GBASE-T port. Terramaster's TOS 4.1 operating system is the Linux-based OS for their NAS units and it comes with a 'desktop-like' UI similar to Synology's DSM. The company also had rackmount enterprise NAS units based on Denverton and Core i3 platforms, as well as Thunderbolt 3-equipped DAS units at their booth.