A mere glance on Azio’s Retro Classic hints that the company fully intended to build a keyboard that stands out from the crowd. If someone had never set eyes on Azio's keyboard and just tried to imagine the keyboard’s design solely by its name, then they would most likely expect it to look like a classic IBM keyboard from the 80’s, as that is a classic PC keyboard. Azio’s designers intent however was to travel further back in time. The core design is based on a typical 104 keys layout, but the keycaps are rounded, reminiscing the form of classic mechanical typewriters and, retroactively, steampunk design.

A closer inspection reveals many more interesting details. Most of the keyboard’s body is made of plastic but the frame that surrounds the keyboard is solid aluminum alloy. The same goes for the decorative tag between the control keys and the arrow keys. The surface of the keyboard is covered with real leather. The keycaps are completely plastic, including the copper-colored plastic surrounds, but the paint job is so good that can easily fool an untrained eye. 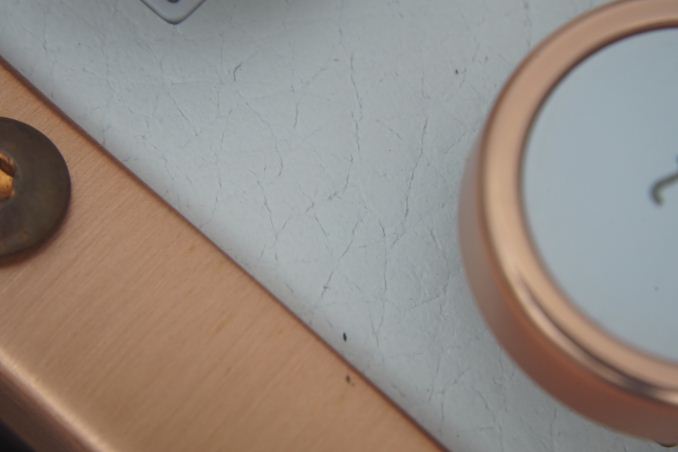 There are four versions of the Retro Classic available. The version that we review today, the “Posh”, has a white leather surface and a copper-colored frame and surrounds. Azio also has available the “Onyx”, with a black surface and dark chrome metallic parts, and the “Artisan”, which is a mix between the former two with a black surface and copper-colored surrounds and metallic parts. Finally, Azio also has a version with a real walnut wood surface, the “Elwood”.

We received the US layout version of the Azio Retro Classic. It is a standard 104 keys keyboard that fully adheres to the ANSI layout. It has a 6.25× Spacebar and seven 1.25× bottom row keys. There are four indicator LEDs at the top right side of the keyboard, three for the common Caps/Num/Scroll lock keys and a fourth that indicates whether the Win key is locked or not. The indicator LED lights are white and fairly bright. The aesthetic problem here is that they are not well isolated from each other, meaning that the light “bleeds” to the inactive indicators next to an active indicator. 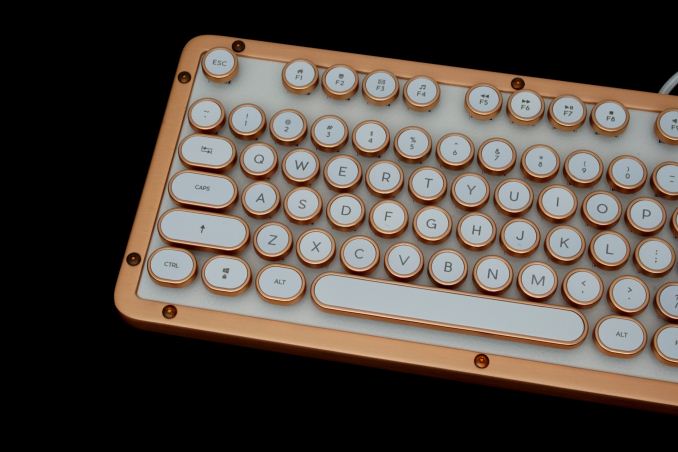 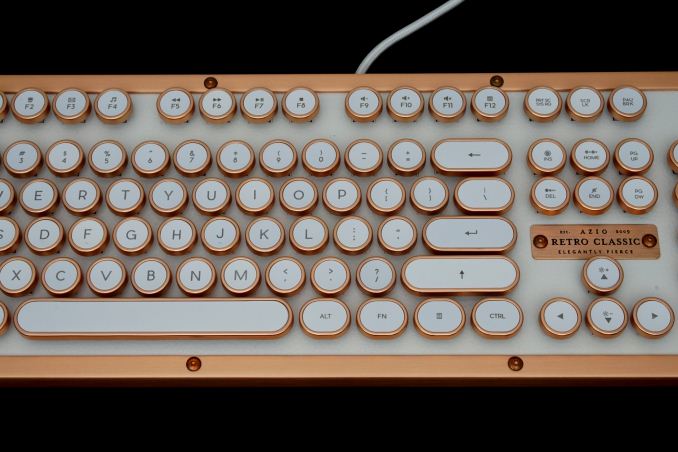 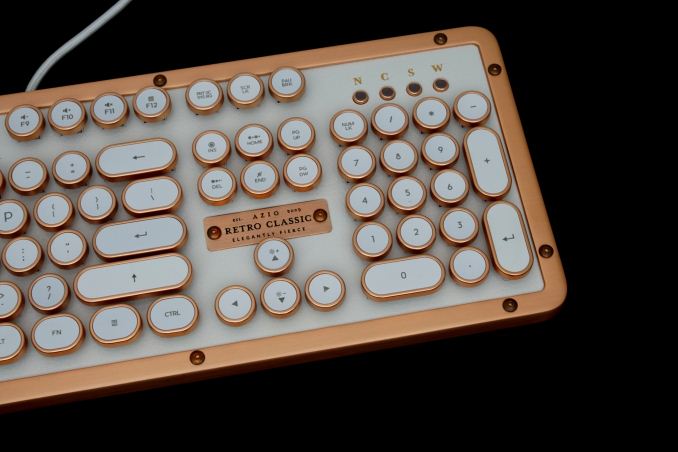 The right Win key has been replaced with an Fn key that allows for a few advanced commands via keystroke combinations. When the Fn key is being held pressed, F1-F4 keys launch basic system applications, F5-F8 actuate multimedia control commands, F9-F11 control the sound volume, F12 launches the calculator, the control/arrow keys control the backlighting and, finally, pressing the Win key locks it.

The Azio Retro Classic stands on pillar-style feet with surrounds matching the color of the keycaps. The rear feet can extend linearly by screwing/unscrewing them, allowing fine tilt adjustments. They only extend about half an inch maximum and some might complain that this tilt is not enough as that they are used to greater tilt angles. We later found out that comparing the Retro Classic to typical keyboards like this is a major mistake, because the circular keycaps have been designed to be pressed at an exact right angle. As the keyboard is entirely flat, with no contoured keys or staircase rows, higher tilt angles actually decrease typing comfort instead of improving it. 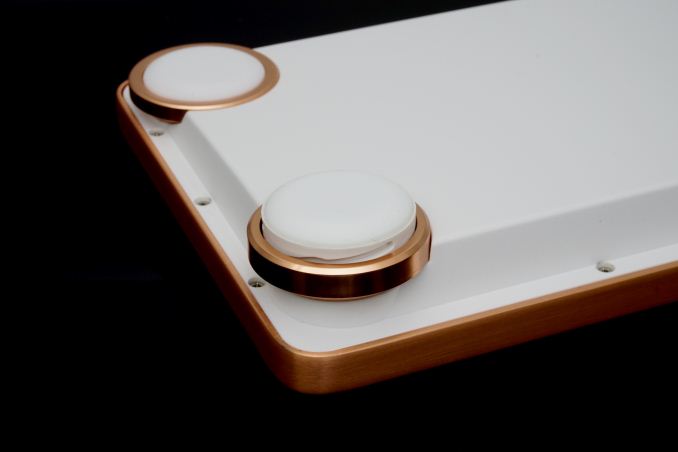 Pulling the keycaps off the Azio Retro Classic is very easy but we strongly advise caution, as they need to be pulled off perpendicularly with minimal wiggling. The top part of the switch that holds the keycap is made of rather thin plastic and it feels easy to dent or damage. Be especially vigilant pulling off the Space Bar key because it makes use of two springs that will just come off once the keycap is pulled. The new Kailh switches have their LEDs at the center of the stem, lighting up the center of the keycap with minimal light bleeding around the key itself. Kailh essentially copied Omron’s mechanical switch concept, whom we suspect are not going to be too happy about this. There is only one Kailh “Typelit” switch currently available and is an audible tactile type, much like a Cherry MX Blue with a significantly shorter travel distance. 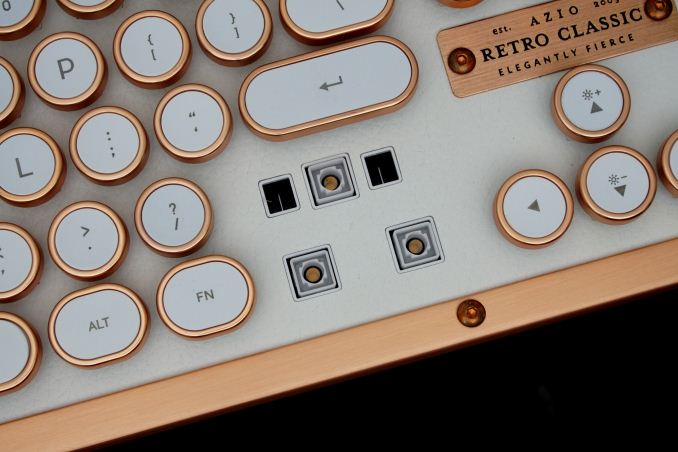 The backlighting color of the Posh version that we received is orange, while every other version is using white LEDs. This was a nice design touch because white backlighting would just not work on a keyboard with white keycaps and a white surface. It is well-applied, covering the keycap characters evenly and brightly. There is some light bleeding around the keycaps, which we would prefer not to have, especially under the Space Bar key. If Azio wanted to, they could stop any light from bleeding around the keycaps, but they deliberately went with semi-transparent plastics for the keycap stem. We feel that containing the light to just the inside of the keycap would match the design better, bleeding lighting is not really matching a retro design.

Inside the keyboard we found a thick steel frame supporting the mechanical switches. Here we can see that the larger keys have support braces evening out the keystroke force from underneath the frame. The design is clean and the assembly job appears to be immaculate, with not even the slightest of imperfections to be found. 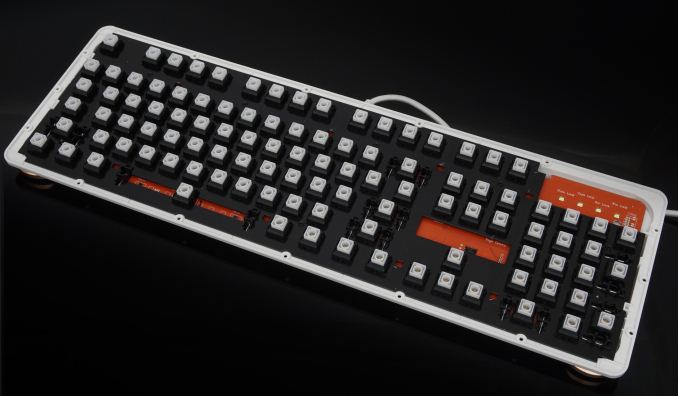 The heart of the keyboard is a Holtek HT68FB560 microcontroller. It is an unimpressive chip, with a 16 MHz CPU and 32 KiB of flash memory. As the Retro Classic has no advanced functions, such as macro recording or programmability options, this controller is more than adequate for the needs of the keyboard. 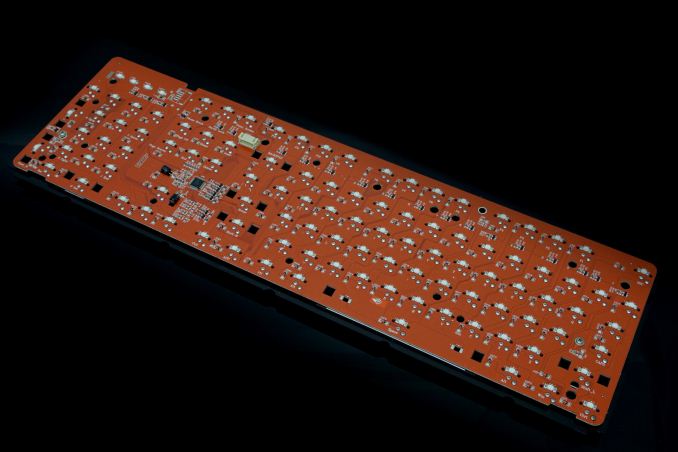 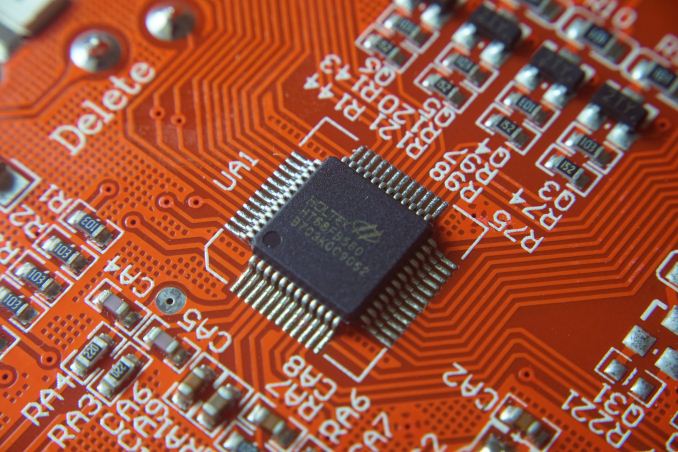