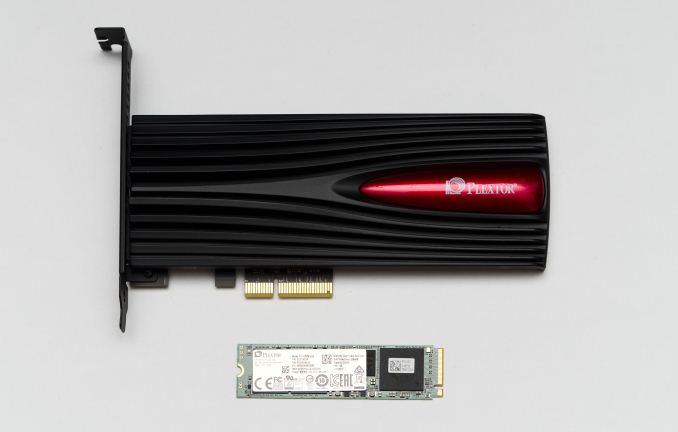 Today Plextor is officially launching their first SSDs with 3D NAND flash memory: the M9Pe family of NVMe SSDs. Based on Toshiba's 64-layer BiCS3 3D TLC NAND, the M9Pe is the successor to the 15nm MLC-based M8Pe, which was their first NVMe SSD. The choice of TLC NAND for this new flagship product mirrors a trend across most SSD vendors, who are abandoning MLC NAND in even the high-end product segments as they transition to 64L 3D NAND.

Aside from the updated NAND, little has changed from Plextor's previous generation of NVMe SSDs, and the specifications are almost identical to what was previewed at Computex 2017. The M9Pe still uses Marvell's 88SS1093 controller with Plextor's own firmware. The 128GB capacity has been dropped from the lineup, and 1TB is still the largest model. Performance ratings for the M9Pe are mostly much higher than the M8Pe, especially for sequential transfers. The 256GB M9Pe has lower random read and write speeds than the M8Pe, and the random read rating of 180k IOPS also falls below the planar TLC-based 256GB M8Se. However, the higher capacities of the M9Pe promise much improved random I/O performance, with random read speeds of up to 400k IOPS for the 1TB model.

The write endurance rating on the M9Pe is a step backward from the M8Pe and instead matches the M8Se's rating. However, as a higher-tier product the M9Pe does get a five year warranty instead of the three year warranty on the M8Se.

As with the previous generation of NVMe SSDs from Plextor, the M9Pe comes in three variants. The base model is the plain M.2 2280 card, dubbed the M9PeGN. The M9PeG is the same M.2 SSD with a heatspreader that adds slightly to the exterior dimensions of the drive. The M9PeY variant is the add-in card version. This places the M.2 drive in a half-height half-length adapter card with a heatsink and LED lighting. The heatsink is geometrically identical to the one used on the M8Se, but the plastic highlights have been changed from blue to red, and the monochromatic LEDs have been replaced with RGB lighting.

Our review samples of the M9Pe have arrived and will begin testing later this week. A full review will be available later this month.