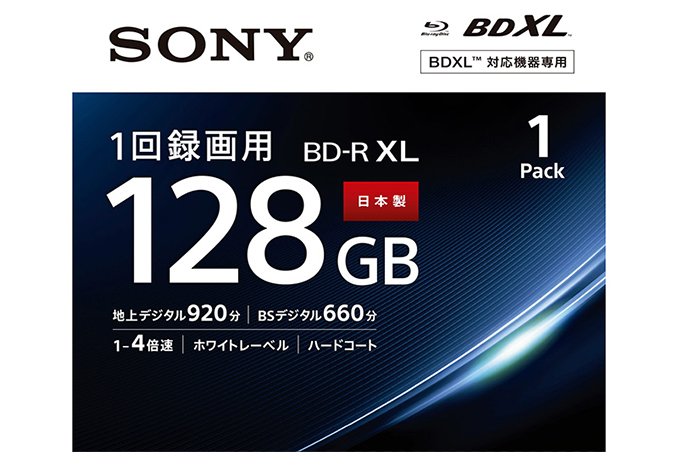 Sony is about to start selling the industry’s first 128 GB write-once BD-R XL optical media. The discs will also be the first quad-layer BDXL media formally aimed at consumers, but bringing benefits to professionals that use BDXL today.

Although the general BDXL specifications were announced back in 2010 for multi-layered write-once discs with 25 GB and 33.4 GB layers, only triple-layer BDXL discs with a 100 GB capacity (generally aimed at broadcasting, medical, and document imaging industries) have been made available so far. By contrast, quad-layer 128 GB media has never seen the light of day until now.

As it turns out, increasing the per-layer capacity of Blu-ray discs (BDs) to 33.4 GB via a technology called MLSE (Maximum Likelihood Sequence Estimation) was not a big problem, and most of today’s BD players and optical drives support the BDXL standard. However, increasing the layer count to four while ensuring a broad compatibility, signal quality across four layers, yields, and some other factors slow downed release of 128 GB BDXL essentially by eight years.

In a bid to build a viable quad-layer 128 GB write-once BDXL disc, Sony had to design three new materials. First, the company had to create a new recording alloy that would provide the right combination of reflectance and transmittance to ensure that the layers can “reflect” data bits when needed while allowing the 405nm laser to pass through them when another layer is accessed. Then, Sony had to develop a new inter-layer material (called dielectric) that would also be able to transmit light waves. Finally, because with four layers the first one has to be located closer to the disc’s surface, Sony had to design a new protective coating for the media.