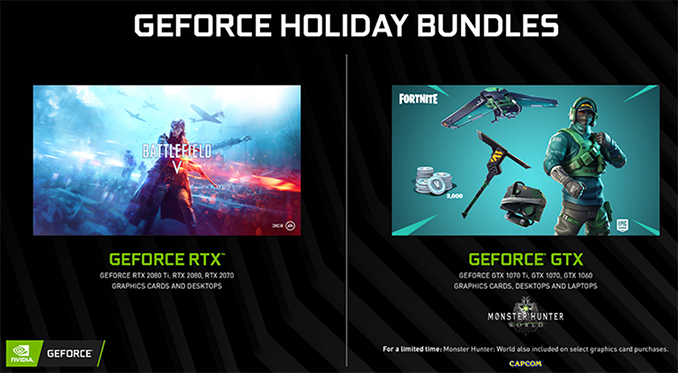 NVIDIA has announced details regarding its GeForce GTX and GeForce RTX bundle campaigns that it is going to run this holiday season. From now on and till early January, NVIDIA will offer free copies of either Battlefield V or Monster Hunter: World with the purchase of eligible graphics cards. In addition, it will offer a set of items for Fortnite game to its buyers.

Customers who buy NVIDIA’s latest GeForce RTX 2080 Ti, GeForce RTX 2080 or a GeForce RTX 2070-based graphics adapters or desktop PC from participating partners will get a copy of Battlefield V ($59.99) for free. The title is the first game to use DXR ray tracing, so it is natural for NVIDIA to bundle the game with its Turing-powered video cards. Besides, supplying an AAA title with a range-topping GPU naturally makes the latter more attractive to enthusiasts. This bundle is already running and is set to go until January 7, 2019.

For those who plan to get NVIDIA’s previous-generation GeForce GTX 1070 Ti, 1070, or 1060-based graphics cards, the company has extended its Monster Hunter: World ($59.99) promotion announced in October until January 7, 2019. In addition, those who purchase one of the aforementioned GeForce GTX adapters will also get a special Fortnite Counterattack Set (which includes a “Reflex” outfit, the “Response Unit” back bling, and the “Pivot” Glider and “Angular Axe” pickaxe gear) as well as 2000 V-Bucks. This Fortnite promo will run until January 29, 2019.