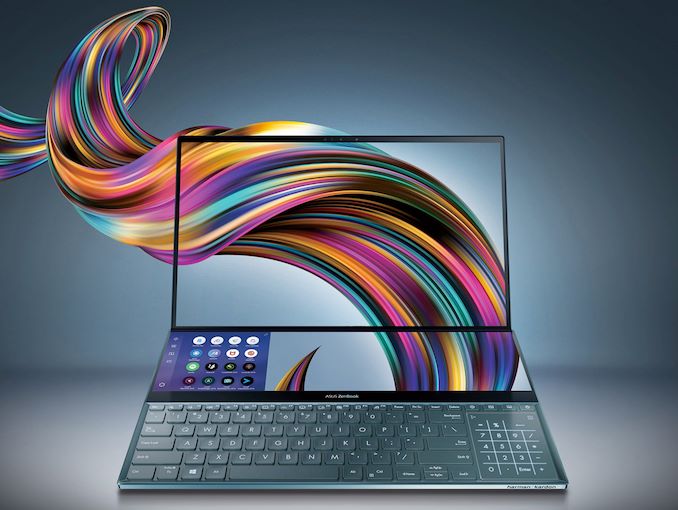 Modern notebooks can offer performance and feature set comparable to those of desktop PCs. One thing that laptops cannot offer is the screen real estate: desktops can be equipped with a large 32-43-inch monitor, whereas mobile workstations come with a 15.6 – 17.3-inch LCD at best (unless, of course, they are connected to an external panel). ASUS this week launched its ZenBook Pro Duo notebook that comes with a 15.6-inch 4K primary OLED display that is accompanied by a 14-inch secondary screen. 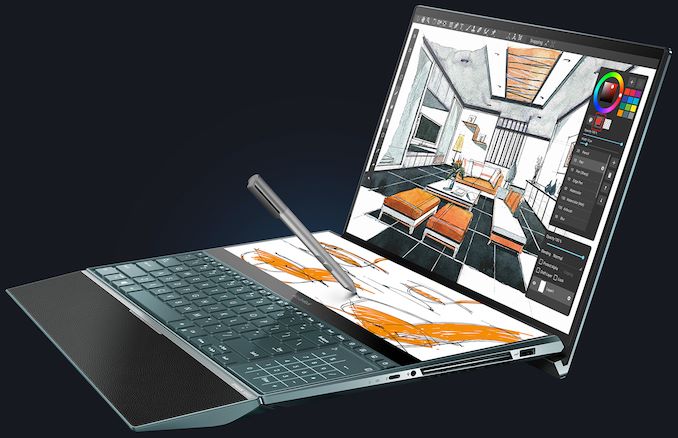 Being in the flagship family of mobile PCs from ASUS, the ZenBook Pro notebooks incorporate all the latest and greatest technologies that the company has to offer. This includes a luxurious aluminum unibody chassis that stand out from any competition. The ZenBook Pro Duo UX58 is clearly not an exception: it comes in a celestial blue aluminum chassis with reflective edges that looks extremely stylish. Unlike most laptops in the series, the ZenBook Pro Duo UX58 is not that compact: it is 2.4 cm thick and it weighs 2.5 kilograms. But there is a reason why the notebook is not really compact: it has two displays and contains high-performance components like Intel’s eight-core CPU and NVIDIA’s GeForce RTX discrete GPU. 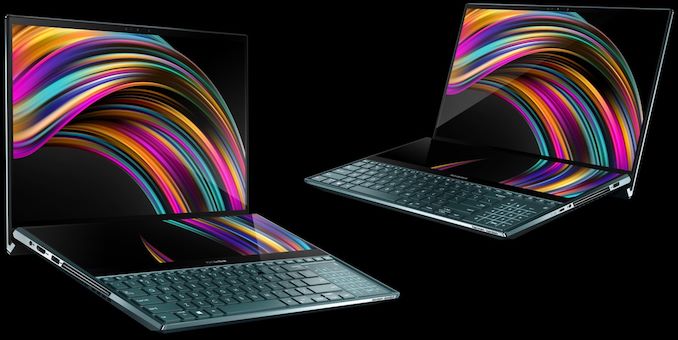 The primary display of the ASUS ZenBook Pro Duo UX58 is a Pantone Validated 15.6-inch OLED touchscreen with a 3840×2160 resolution that can reproduce 100% of the DCI-P3 color gamut. The secondary display of the laptop, which the company calls ScreenPad Plus and which is located above the keyboard, is a 14-inch touch-enabled display featuring a 3840×1100 resolution, a 32:9 aspect ratio, and 178˚ viewing angles. The ScreenPad Plus can be used like a regular secondary display under Windows to extend the desktop space. Besides, it can be used with ASUS’s ScreenXpert control software that simplifies multiscreen window and program management as well as can run specially-designed apps. Furthermore, ASUS is also working with developers of professional applications to create versions that can take advantage of the ScreenPad Plus in a way that many apps take advantage of Apple’s TouchBar. 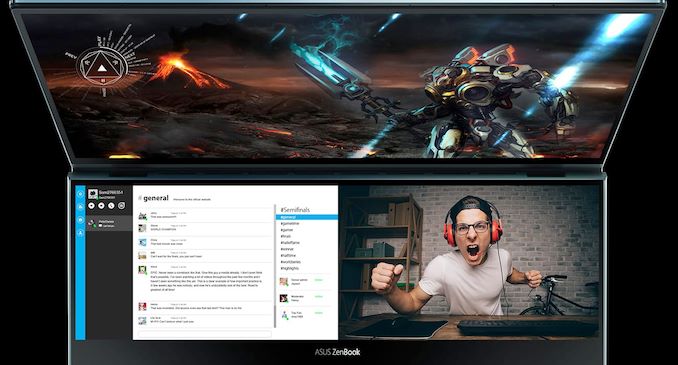 The internals of the ASUS ZenBook Pro Duo UX58 is as premium as its externals. Depending on exact model, the notebook can be based on Intel’s six-core Core i7-9750H or unlocked eight-core Core i9-9980HK processor, though we do not know whether ASUS lets owners of the notebook overclock this CPU. The systems also feature NVIDIA’s discrete GeForce RTX 2060 graphics processor with 6 GB of GDDR6 memory; 8, 16 or 32 GB of DDR4-2666 DRAM, and an SSD with up 1 TB capacity (PCIe 2.0/3.0 x4/NVMe). Considering that we are dealing with very high-performance components, expect ASUS to use a specially designed cooling systems with multiple heat pipes and fans. To boost performance of the notebook, it has a Turbo Fan button that speeds up fans to maximize cooling performance and enable the CPU and the GPU to increase their boost clocks. 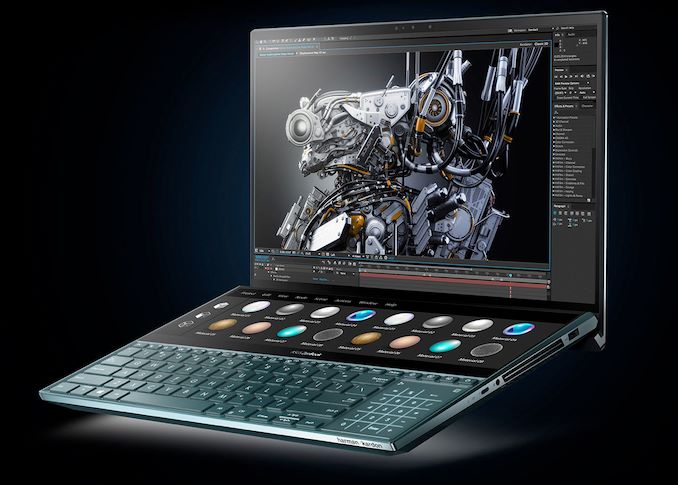 Connectivity wise, the ZenBook Pro Duo UX58 is a first-class machine as well. On the wireless side of things, the laptop is equipped with Intel’s Wi-Fi 6 solution (with Gbps+ throughput) and Bluetooth 5.0. As for physical connectors, the laptop comes with one Thunderbolt 3 port, two USB 3.1 Gen 2 Type-A connectors, an HDMI 2.0 display output, a 3.5-mm combo audio jack, and a proprietary jack for charging. 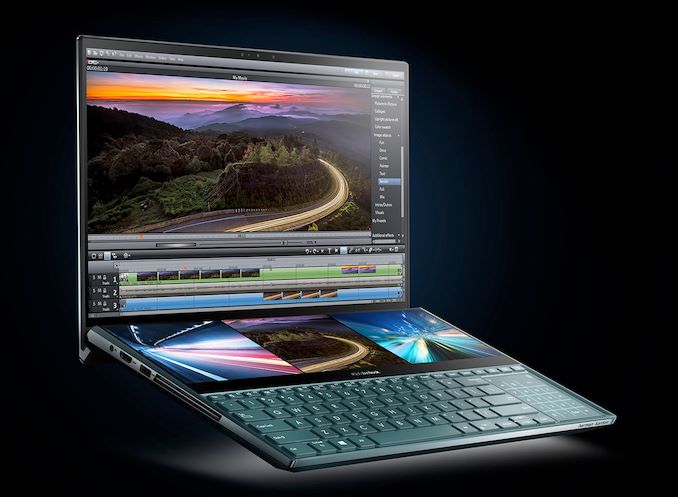 When it comes to multimedia capabilities, the mobile PC has a Windows Hello-capable webcam with IR sensors, Harman Kardon-badged stereo speakers, and a microphone array with Cortana and Alexa voice-recognition support, 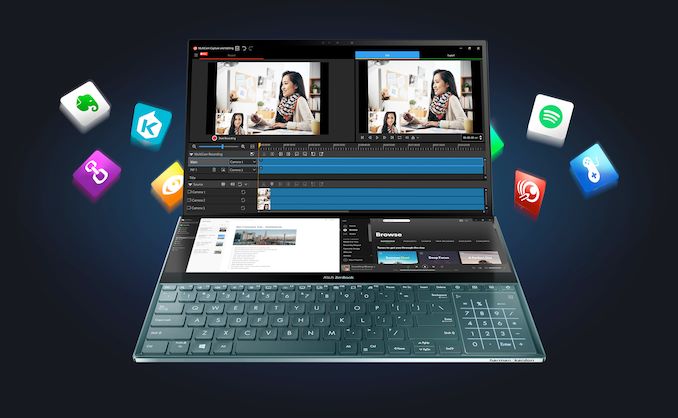