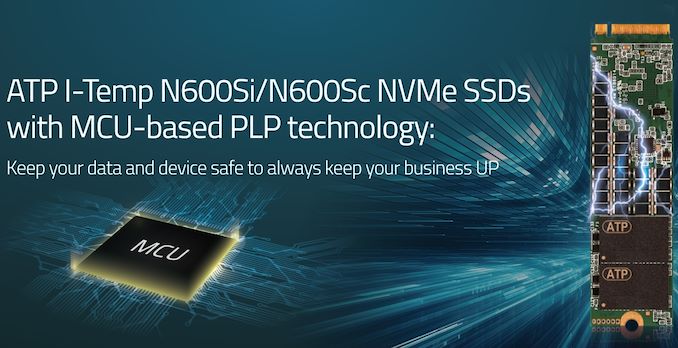 ATP’s N600S-series drives are based on an NVMe 1.3 controller with eight NAND channels that supports Low-Density Parity-Check (LDPC) ECC with a 2 KB codeword, end-to-end data protection, and programmable RAID engine. The drives are set to be available in 120 GB, 240 GB, 480 GB, 960 GB, and 1920 GB configurations and offer sequential read/write performance of up to 3,420/3,050 MB/s, which would make them among the fastest M.2-2280 SSDs for embedded applications with a PCIe 3.0 x4 interface.

One of the key features of ATP’s N600Sc and N600Si SSDs is the company’s 4th Generation power loss protection (PLP) technology, which the company calls PowerProtector 4. The technology relies on a special microcontroller unit (MCU) that enables protection not only against power loss, but also against excessive input power noise, power-up inrush current, and input over-voltage, which is something that may happen in rough environments. The MCU can be further customized as well, so the PLP feature can be tailored towards particular customers and a particular applications.

ATP did not announce MSRPs of its N600S-series SSDs, but since the company plans to offer different versions of the drives with ability to tailor them, prices will vary.