The party piece of this hardware comes in the form of the wrap around heatsink - the passive design and the low power usage (10W in 2D or idle mode) is destined to appeal to HTPC and quiet systems enthusiasts who yearn for DirectX 11. 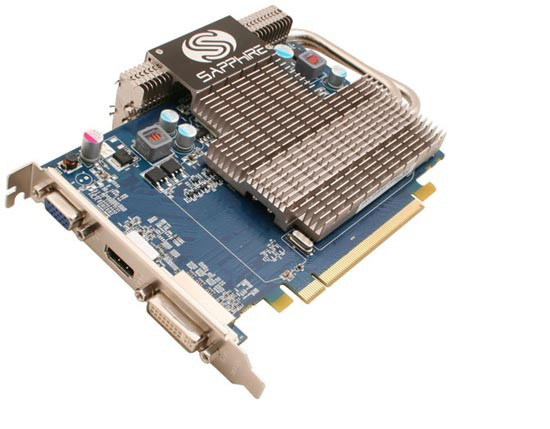 Using a Sapphire-custom PCB and AMD's 40nm Redwood GPU, you will see 320 shaders clocked at 550Mhz, with a 1GB DDR2 memory at 800Mhz connected via a 128-bit interface.  Seems odd that they're using DDR2 and not GDDR3, given the increased heat dissipation mechanics of GDDR3 and the cost between them is negligible.

In terms of battling against the multimedia, the card offers DVI, HDMI and and VGA outputs while conforming to the HDMI 1.3a standard for full support on Dolby TrueHD and DTS-HD Master Audio.  ATI's on-board Unified Video Decoder will provide hardware decoding of all Hi-Def media.

Pricing so far has not been announced, but expect it to be in the region of £70/$90.