Of course, what’s really changed about the Droid 2 is the keyboard. I reviewed the original Droid a while back, and talked a lot about why I found the first Droid’s keyboard frustrating to the point of being unusable. What I was missing however was perspective on the original Droid’s refreshed keyboard, which has somewhat raised keys, and thus much better feedback. 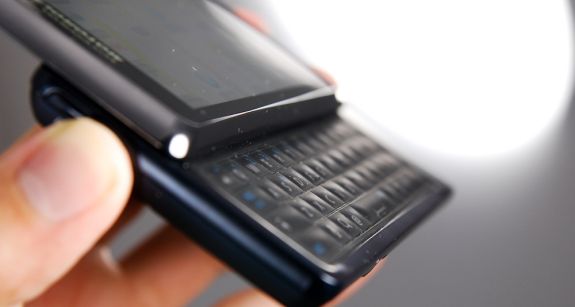 If you’re contemplating upgrading from the original device, just how much better the Droid 2’s keyboard will feel to you is purely a function of which revision of the original Droid you’re coming from. If you were an early adopter and got the first one, the difference is dramatic to the point of earth shattering. Most people I know with the first revision, concave-key sporting version don’t even use the hardware keyboard. However, if you’ve already got a later revision from hopping onboard later or RMA, the difference isn’t nearly as dramatic.

The oversized Dpad is gone, which is good for most things as it just didn’t serve much purpose in Android, but did have get use in some game emulators and other programs. Android developers are likely going to build interaction paradigms around whatever inputs are present on a majority of devices, and there just doesn’t seem to be a majority of Android handsets with Dpads or optical trackpads. You’re not totally screwed if you needed directional controls, however, as the Droid 2 maintains up down left and right keys in the bottom right. What’s really nice about the Droid 2 keyboard is that the space picked up from ditching the DPad has been put to really good use. The keyboard is arranged in an offset pattern just like a real QWERTY keyboard should be.

The domes themselves are also convex, just like they always should have been. Even better are raised bars on j and f for index finger placement—again, just like a real keyboard.

There are dedicated search, microphone input, back, and ok buttons as well. The result is that with the exception of home, all of the capacitive buttons are present in landscape mode as well. There’s alt-lock in the place of caps lock, which is a bit odd, but everything you’d expect is here.

The Droid 2 has pulled a complete 180 from the original Droid’s travesty of a keyboard. I’d say the device has gone from having one of the industry’s worst smartphone keyboards to arguably one of the best, if not the best. My only major complaint is that the top row of keys is too close to the slider—your fingers will occasionally brush the top. It just feels like there should be an extra millimeter or two of space, especially considering how there’s plenty of that at the bottom. Just look at the photos above and you'll clearly see that the original Droid had an extra mm or two at the top. If you've got long fingernails, this reduced space will definitely pose a problem.

The keyboard slider assembly is likewise unchanged from the original Droid. There’s no spring assist—just friction. There are thankfully two clicks for keeping the phone in the closed or open position, but nothing more. Sliding the tray open and closed is smooth, but not very. 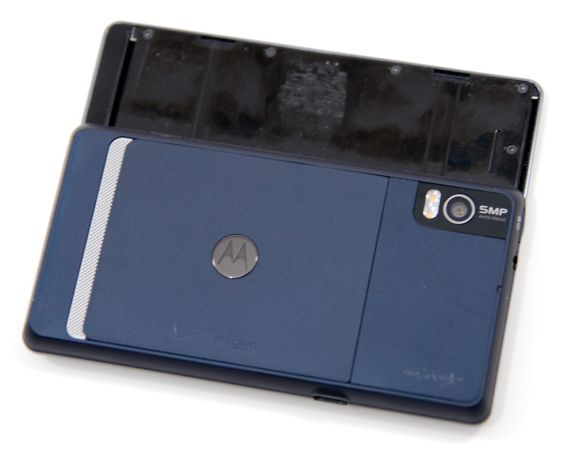 I don’t think anyone will complain about it, and don’t get me wrong—it isn’t a problem—but I’m left wondering why Motorola seriously couldn’t add two strips of Teflon to the slider and make it feel smooth as glass. HTC has done it forever.

As it stands, you can clearly see the slider assembly making marks on the glossy back of the display, which begs another question: why the heck is this so glossy? Regardless, the addition of some teflon would make the Droid 2’s slider rightfully feel like a piece of precision engineering or an expensive micrometer. Otherwise, it feels forced and a bit cheap. There’s also one or two degrees of oreo effect when the keyboard tray is closed. In the open position, the mechanism is completely solid.

The Droid 2's backlighting is adequate, but just a bit understated. I didn't have problems finding keys in the dark, but they're not super bright, just lit. 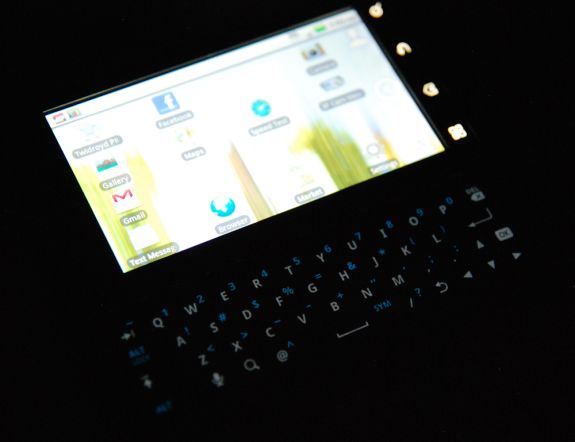 On the whole, the Droid 2 feels much the same as the original device. What’s different is that Motorola has worked out the few hardware oddities (like that chin at the bottom) and smoothed over the hardware’s rough spots. Literally smoothed over—the 2 has gracefully rounded edges along the outside and slightly longer radius curves in most others.

The result is probably the most optimal balance between ties to the old Droid and a much needed refresh.