If you’ve played around with the original Motorola Droid, the Droid 2 will feel very familiar. In fact, at first glance, the Droid 2 appears almost identical to its predecessor—so much so that distinguishing the Droid 2 from the original in the hands of passers-by can be a bit of a challenge.

First off, the back of the device isn’t black anymore, it’s a deep navy blue. In fact, basically all of the plastic on the back is a deep navy blue soft touch material. I’m generally not a fan of soft touch backs, as they tend to rub off or discolor from hand grease after a few weeks, but the Droid 2 has done a pretty good job keeping its tack.

The other particularly striking aesthetic change is a dark chrome band running around the top edge of the display. It’s a deeper, darker kind of chrome than I’ve seen on a smartphone before, and gives the Droid 2 a classier look instead of the gaudy fingerprint magnet that chrome usually turns into. 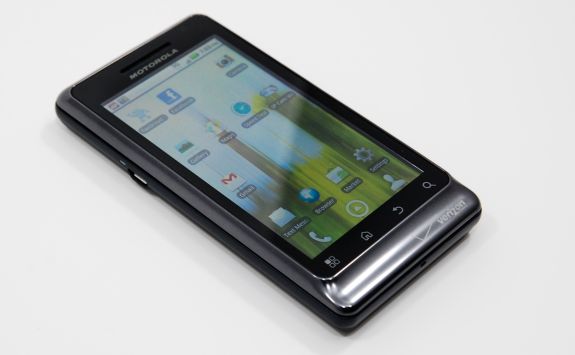 The lip at the bottom is likewise gone, replaced with a tapering chrome slope. Honestly, this space is now somewhat wasted on the Verizon logo. The microphone that used to be here is displaced to the bottom of the device.

The other physical changes are subtle. The previously troublesome volume rocker has been replaced with a much more solid feeling one with less protrusion, and the hard to click camera shutter button also is gone. Both of these changes are perfectly executed—the shutter button is still two step, but now doesn’t require so much force that you change composition when pressing so hard.

Motorola has kept the same style capacitive buttons from the original Droid, and they work the same as the previous device's. What’s different is the placement.

I’ve already said my piece about this before in the Droid X review. What’s good is that the Droid 2 now has the same button order as said device. What’s bad is that it will no doubt be met with swearing and gnashing of teeth for a few weeks if you’re used to the placement on the original Droid. Hopefully things will settle down now and there will be some standardization. Hey, imagine how I feel regularly using 3 different layouts.

The back of the Droid 2 is essentially the same design, but different colors. The gold speakerphone grating is changed—it’s silver now. As I mentioned, the back is now a navy blue color soft touch material. The camera markings and glass/plastic cover have been moved around a bit, but the camera and flash assemblies themselves appear unchanged. 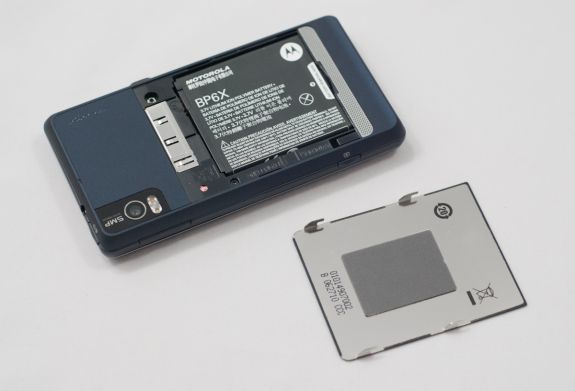 If you pop off the battery door, you’ll discover what lies underneath is basically the same as well. In fact, the Droid 2 appears to use the same BP6X battery the old Droid did, which is a welcome boon for old Droid users—you've now got a backup battery. 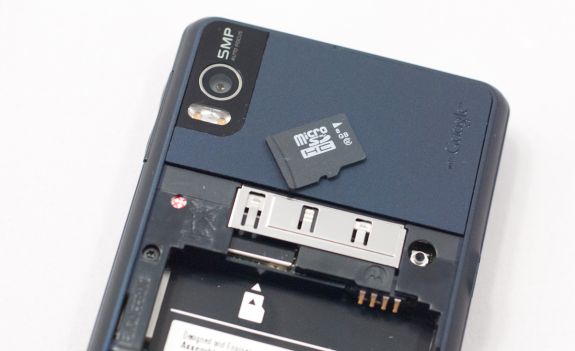 The microSD card slot is still not quite optimal, requiring you to slide your thumb along the top and press to get the card out. I strongly prefer press-click-eject designs as I’m constantly worried about breaking or scratching contacts. I guess Motorola doesn’t expect you to be taking the microSD card out a lot. Oh and the card is class 2, not higher performance class 6 like on the Droid X.

The only remaining subtle tweaks are up top. The power button is similar in shape and style to the other buttons, sporting a rounded top that blends into the case. It’s sometimes a bit hard to locate the power button by sliding your finger along the top of the case, but not impossible.

If you look carefully, there’s also a tiny notch right at the edge between the flat back of the device and the top—this is the port for an internal microphone for noise canceling. I’m a bit concerned this could get blocked with lint or grime. It’s seriously tiny. 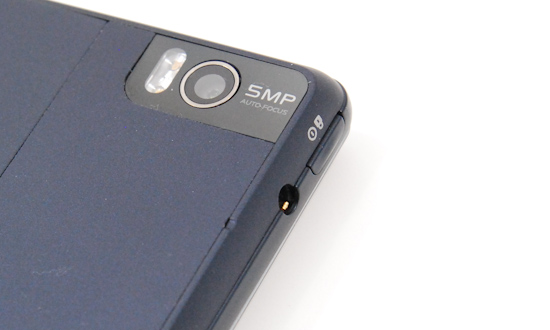 The phone is essentially exactly as slim as its predecessor, but still not super thin. You pay a price in thickness for getting that hardware keyboard (which is excellent—more on it in a second), but not a big one.

Lastly, the Droid 2’s packaging isn’t anything special or extraordinary. It’s similar to the packaging the Droid X came in, with the device in a nook at the right, and a flip up cardboard piece with accessories underneath. Motorola and Verizon aren’t going for flashy with the packaging, they just want to fit a heck of a lot of them in a box for shipping. 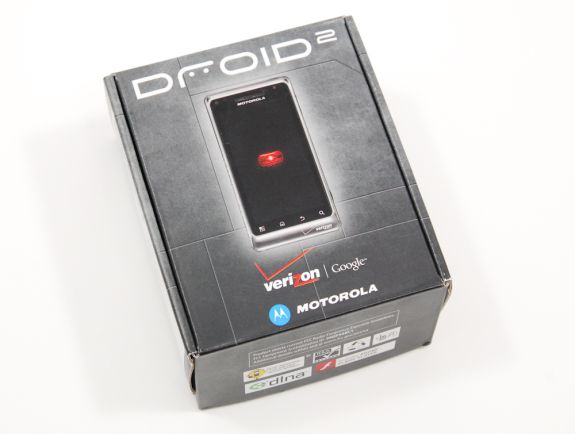