Today Motorola unveiled 4 new Android based devices during their press conference at CES today; three smartphones and 1 tablet.  We were able to get some limited hands on time with these devices at the end of the conference.

The first device, the Atrix 4G was announced earlier this morning during AT&T's press event but we do have a few more details about this smartphone and its "webtop" peripherals. Here are the detailed specs from Motorola's press kit:

Two docking peripherals were also showcased for the Atrix; a desktop dock with HDMI out and a laptop dock with 36Whr battery and 11.6” display.  The Atrix can seamlessly move between these docks.  There was no discernable lag when going between the desktop dock to standalone, and then to the laptop. 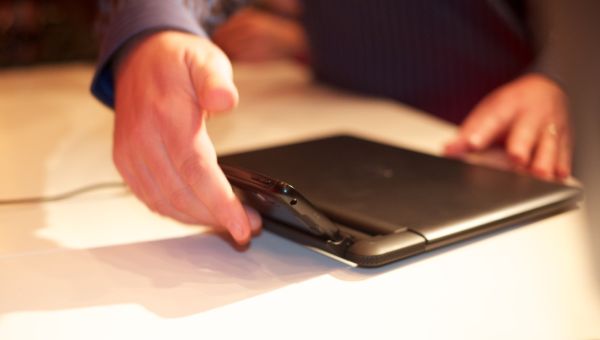 When docked in the laptop you run a webtop app that runs on top of Android that lets you spawn other Android apps in tabs as well as browse in Firefox. Unfortunately we were not able to run any benchmarks on these phones after the press event, we can comment on its performance subjectively.  The UI was pleasantly smooth and responsive.  We didn’t notice any slowdown in performance while web browsing or during general usage of the phone.  When docked, performance of the Firefox browser (full desktop version 3.6.13, Motorola proudly states) was also quite snappy for a mobile device.   The web browsing experience was surprisingly good.

The build quality of the laptop dock was very good.  The chiclet style keyboard was comfortable and easy to type on.  Not quite as good as the 11” Macbook Air, but definitely more than adequate.  Surprisingly the laptop dock is heavier than expected given that it really only contains the screen, keyboard and battery.  We do not have official weight figures for it yet.

No official release date was given for the Atrix 4G however Motorola states it will be available sometime in Q1 2011.

The next device announced is the Driod Bionic.  This looks to be another dual-core 1GHz smartphone, however Motorola wouldn't clarify whether or not it was based on NVIDIA's Tegra 2. Here are the detailed specs:

The Droid Bionic will be a Verizon LTE device wth a 4.3” qHD (960 x 540) LCD display and 1930mAh battery. Physically this phone is a bit larger in all dimensions and heavier than the Atrix 4G.  It also has half the memory (512GB vs 1GB on the Atrix) and doesn’t feature any of the webtop capabilities.

The final product announced today was the Xoom tablet.  Motorola states this is the “world’s first” device to run Honeycomb (Android 3.0).  Unfortunately Motorola wouldn’t let us get our hands on the Xoom since its still not production ready.  They had the Xoom running a few demo videos that honestly did not seem very impressive.  Maybe it was the framerate of the video, but the UI demonstration looked pretty choppy.  Hopefully they’ll have the performance kinks worked out closer to launch.  Motorola says the Xoom is scheduled to launch sometime in Q1 2011.

Here are the detailed specs for the Xoom:

Surprisingly Motorola wasn’t definitive about using the Tegra 2 in the Xoom in its press release.  We couldn’t find Tegra 2 mentioned anywhere else in Motorola’s press releases.