The new Kindle Fire may have gotten most of the attention when Amazon refreshed its Kindle lineup this year, but Amazon is still very much in the e-reader market. The fourth-generation Kindle, the Kindle Touch, and the Kindle Touch 3G all promise to deliver the traditional Kindle experience in a lighter and less expensive package - continue reading for our thoughts on the new $79 Kindle.

The new Kindle’s 6”, 600x800 E-Ink Pearl screen is basically the same as the previous model’s, but that’s where most of the hardware similarities end: the keyboard, a mainstay of all previous Kindles, has been removed and replaced by four physical buttons and what Amazon calls a “five-way controller,” a directional pad surrounding a button. Typing is now done using this controller and an on-screen software keyboard, which I’ll complain a bit about later. 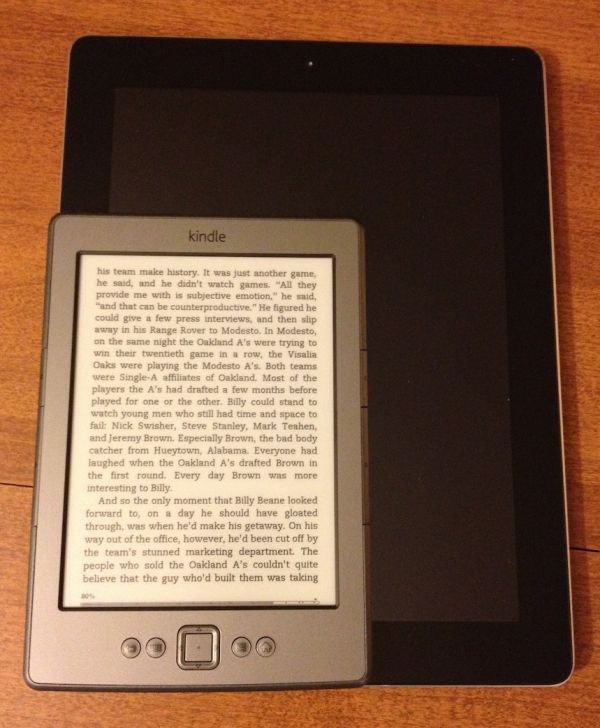 For all the inconvenience of text entry, the keyboard’s removal does noticeably reduce the Kindle’s size and weight - the new unit is 6.5” (166mm) tall, 4.5” (114mm) wide, and 0.34” (8.7mm) deep, and weighs just a shade under 6 ounces, down from the 8.5 ounces of the previous model. As a result, it’s comfortable to hold in one hand for most extended reading sessions. Many promotional shots show it nestled in the back pocket of someone’s jeans, which you can do, even though you feel like you’re going to snap it in half when you sit down. Suffice it to say that it slides easily into most bags, cases, and purses without issue. 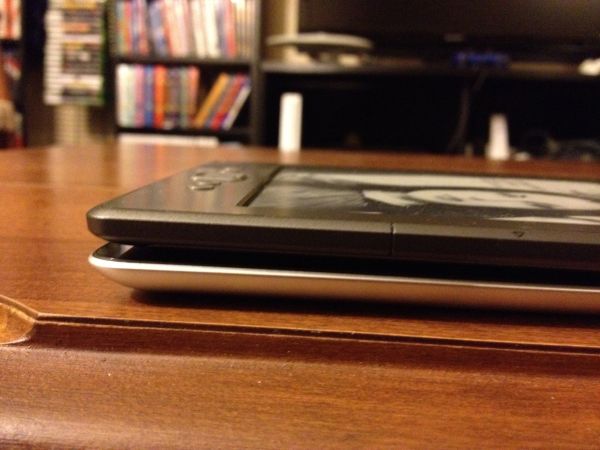 On the inside, the Kindle is outfitted cheaply (to hit that $79 price point) but well enough, given its intended function - the fine folks over at Blog Kindle have done a very thorough, device-bricking teardown of the Kindle so that we didn’t have to. The action is driven by a Freescale i.MX50-series Cortex A8 SoC running at 800MHz, while an Epson KCRE7000 E-ink display controller handles the visuals. An Atheros AR6103 chip provides wireless b, g, and n Wi-Fi speeds of up to 72.2 Mbps on the 2.4GHz band. 256MB of RAM from Hynix and 2GB of flash memory from Sandisk round out the rest of the Kindle’s important chips. 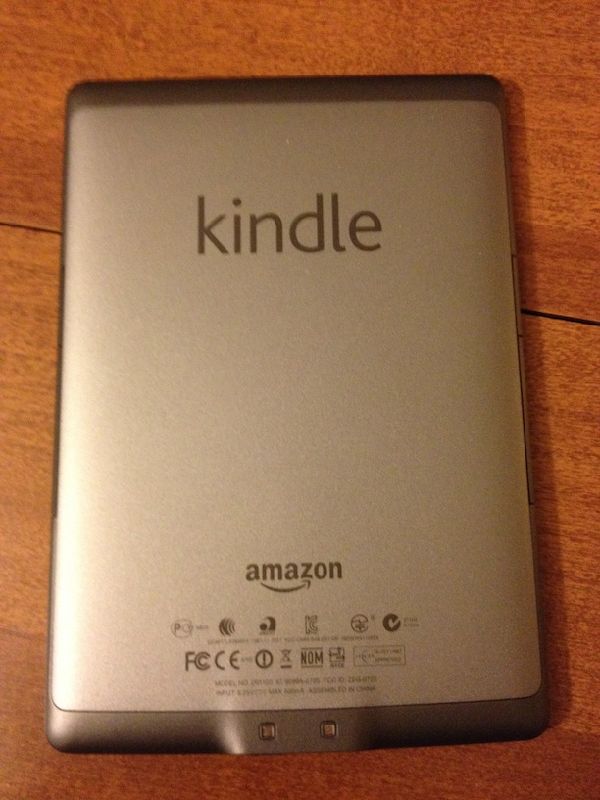 All of this hardware is powered by a 890mAh 3.7 V battery, which Amazon says is good for about a month, and while I haven’t had the thing for a month I can say that this sounds about right - after a week of daily usage, I’ve used about a quarter of the Kindle’s battery life. There’s no charger included in the box, but the included micro-USB cable can be connected to any computer or USB charger - the Kindle had no problem with my iPhone’s charger, and I expect that most micro-USB chargers will work without issue. Amazon also sells its own branded adapter for $10. 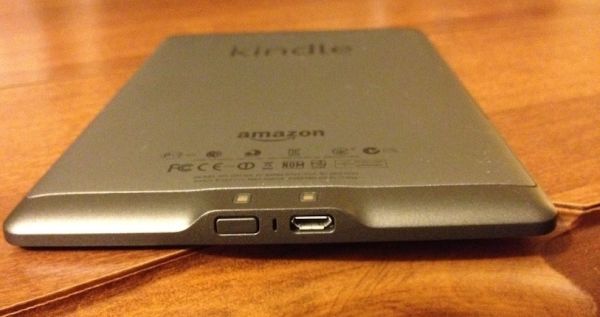 The basic Kindle’s 2GB of storage space (which in practice works out to be around 1.3GB after the system software) is half that of the previous generation Kindle and the forthcoming Kindle Touch, though it’s certainly as much as you need to store anything you’re actively reading. Amazon’s cloud storage lets you archive anything you’re not reading, and you can re-download it to your device in short order if you’ve got a Wi-Fi connection.

Aside from Amazon’s .AZW format books, this Kindle supports TXT, PDF, unprotected MOBI, and PRC files natively. HTML, DOC, DOCX, JPEG, GIF, PNG, and BMP files can all be viewed after being converted by Amazon or another program. You’ll notice that there are no audio files on this list - the low-end Kindle doesn’t support audio in any way, so audiobooks, the “read to me” text-to-speech feature, and music are incompatible with it. The Kindle Touch will include audio support when it launches in November, and the Kindle Keyboard (a rebranding of the previous-generation device) continues to support audio.

Plugging the Kindle into your PC puts it into USB drive mode, where you can charge the device and move files into its flash memory. To continue to charge the Kindle while using it normally, eject it from the computer. 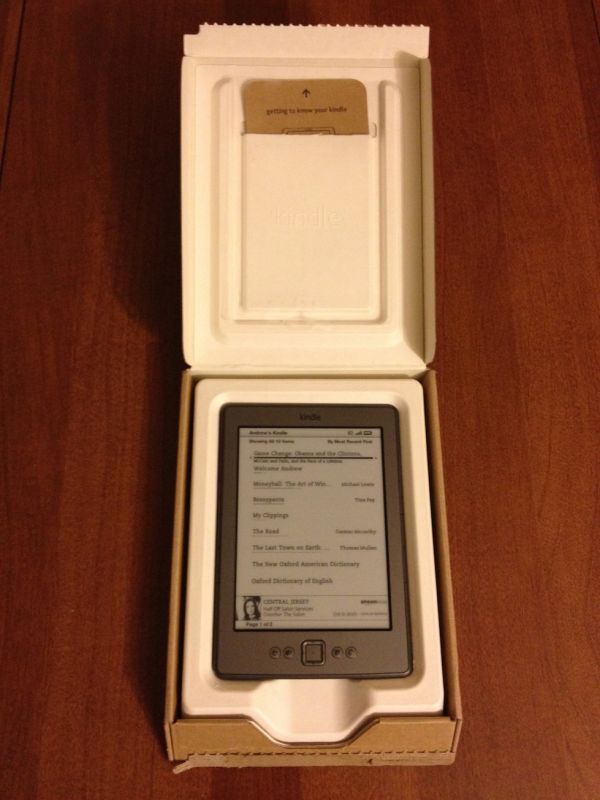 The Kindle comes in a simple, unadorned cardboard box with “Kindle” emblazoned on the side. Open it up, and you’ll find the device and the micro USB cable nestled in an all-cardboard enclosure that should be familiar to anyone who has experienced Amazon’s “frustration free” packaging - the lack of plastic makes it both easier to open and more environmentally sound. A simple slip of cardboard tells you how to navigate with and charge the Kindle, and there’s no other manual in sight. 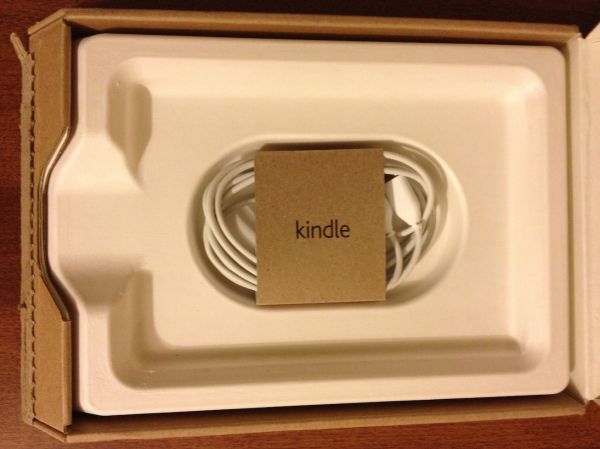 First-time setup is a bit of a pain, and it all comes down to the keyboard - previous Kindles have all used a smartphone-ish physical keyboard (the Kindle Keyboard continues to, of course), and forthcoming Kindles will all include some manner of touchscreen, but the base Kindle just has an on-screen keyboard and a directional pad for navigation.

You now know why no one Tweets from their Xbox 360. For the same reason, you’ll want to stay away from the included web browser for anything more complicated than a quick search - typing is just too belabored.

After connecting to my wireless network (WEP, WPA, and WPA2 are all fully supported, and once I typed in my SSID the Kindle saw my hidden network without difficulty), I found downloading books from my Kindle library to be quick and relatively painless, though again hampered by constant clicking to navigate and to type. Buying new books is best done on a PC, where Amazon will give you the option to have your titles automatically downloaded to the Kindle - you can find and purchase books on the device itself, but if you find the keyboard as painful to use as I did you’ll tend to shy away from it. To its credit, Amazon’s search suggestions list is pretty long and pretty aggressive, so you generally shouldn’t have to type the entire name of the book or author that you’re looking for.