When I first met Holo, Google's Honeycomb theme, I wasn't convinced that it was something that would last. It was different, which earned Google points for sure, but it wasn't exactly comfortable. I was surprised to see an evolution of Holo used in ICS, but the theme has grown on me.

Ice Cream Sandwich feels a lot like Android meets Windows Phone. Part of that surely has to do with the very contrasty nature of the theme, but it's also the choice of font (Android 4.0 replaces Droid Sans with Roboto) and hard edges sprinkled throughout the UI. Holo is still distinctly Android in that there are still multiple home screens with support for widgets, but it's also different. Ice Cream Sandwich is Android maturing, it's the second implementation of Holo allowing us to finally plot a trajectory for where Google sees this thing going in the near term. It's different as I mentioned before. Holo and ICS aren't iOS nor does it look like they ever will be. The UI is either going to pull you in or turn you off. I like it. It's different, it's clearly a play on the whole Android theme; it's the type of UI you'd expect from an OS named after a robot.

At the same time it's no longer awkward. Elements of the design and many of the first party apps are just clean. It's truly a first class citizen. Different than both iOS and Windows Phone, but with a design that's just as credible.

The core of Android remains unchanged. You get multiple home screens (five by default) that you can populate with shortcuts, widgets or folders. Widgets are resizable just as they were in Honeycomb. Shortcuts work the same way they always have, while Folders get a nice update in ICS. Drag any icon on top of another one and they'll create a folder. Folders are quick to open and easy to rename, just tap on the name of any open folder and type away.

The app launcher gets a bit of a facelift. Instead of an endless scrolling cube, you get pages of apps that you flip through. Once you've reached the end of your pages of apps you'll start flipping through widgets. All of this is smoother than it has ever been on Android.

Play around with ICS for a little bit and you'll quickly pick up on a new UI element that appears inspired by Windows Phone: 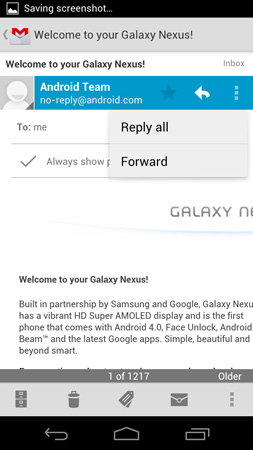 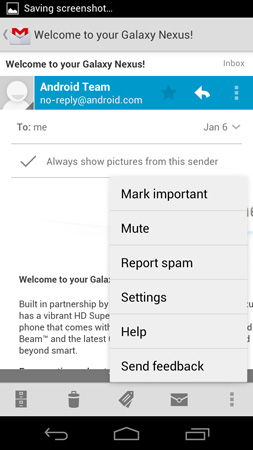 These vertically oriented ellipses will appear at either the top or bottom of an app and reveal additional menu options.

In Gingerbread you had the fixed Android menu button, but with that gone you have to rely on these contextual menu buttons to bring up additional actions. I'm honestly pleased with the move because all too often I'd forget to tap the menu button to see whether or not there were additional options in Gingerbread. ICS makes it very obvious when there's more you can do.

A cornerstone of any good operating system is a good task switcher. I still believe that webOS dealt with the concept of individual apps and switching between them better than any other mobile OS, but it looks like that platform is pretty much dead with little chance of making it into the top three mobile OSes.

Google and iOS haven't traditionally focused much on task switching, although both have provided support for it. In Gingerbread, you'd switch between apps by holding down the home button, which brought up a list of up to eight of your most recently used apps. Ice Cream Sandwich implements a drawer-style app switcher menu, first introduced in Honeycomb, activated by hitting the dedicated task switcher button:

The Gingerbread method of switching may be quicker, but it's definitely not as useful as what ICS offers. For starters you can switch between more than just six apps in ICS. The most recent apps are located at the bottom of the list, the oldest at the top. You can also quit apps using the switcher by sliding them to the left or right. Doing so immediately frees up any memory the app was using, even if it was suspended.

Scrolling through the list of recent apps, like scrolling pretty much anywhere in ICS, is extremely smooth. The only real complaint I have here is that the task switcher takes far too long to draw initially. As I alluded to before, this is something that may get better with a faster SoC, particularly one with a faster GPU. 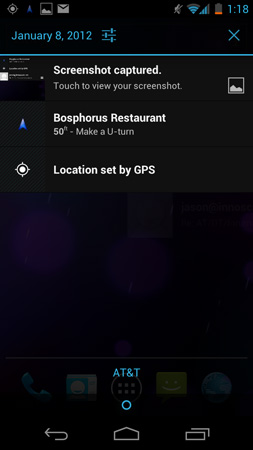 I am surprised Google didn't borrow the quick settings options its partners usually like to stick in the shade, but there is a link to the system settings panel at the top.

Android 4.x also finally enables the ability to take screenshots from within the OS. There's no necessity for OEMs to bake-in their own screenshot functionality and key press combination, no need to connect using USB and fire up ddms, and no need to root and install some application to make it work. Traditionally, those three have been the exclusive way to get screenshots taken on Android.

To take a screenshot in Android 4.x, simply hold volume down and the power/lock button at the same time. An animation plays, you get a notification, and the screenshot is saved (with a timestamped name in PNG format) in /pictures/screenshots as shown above.

I can't emphasize enough how important being able to take screenshots is for a platform in general. Without screenshots, users can only vicariously share a given OS when they're in direct contact with someone else. Being able to take screenshots without all the nonsense I've outlined above is part of what has made iOS so ubiquitous online - browse Reddit and count how many screenshots of SMS conversations (trite as they all are) are clearly from iOS versus Android. It's clear to me that Matias Duarte understands this, since webOS and even the Danger Hiptop since day 1 had the ability to take screenshots. Now Android 4.x finally joins the fray.